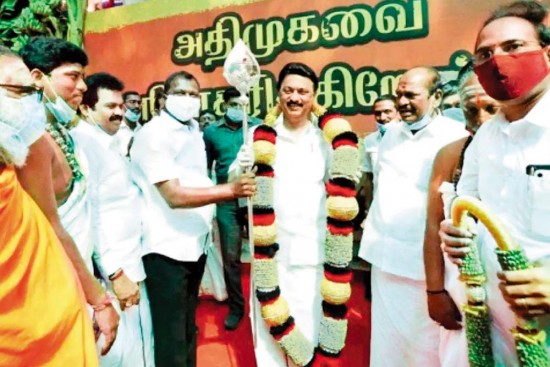 This election season in Tamil Nadu, the Vel (spear), the weapon of choice of Tamil God Murugan, appears to be the main prop for political leaders. After the BJP state president  L. Murugan defied prohibitory orders to hold a “Vel” yatra across the state to protest against the insult to the Tamil God by rationalists, even a non-believer like DMK president M.K. Stalin reached out for the Vel.

When Stalin held a Grama Sabha meeting of DMK supporters on January 23 near Tiruttani in northern Tamil Nadu, one of the six holy abodes of Lord Murugan, he was presented with a four-foot silver spear by the local DMK leaders. They had also got pujaris from the famous temple to bless the spear before it was handed over to their leader. Photos of a smiling Stalin holding the spear as the saffron-clad pujaris looked on soon became a butt of attacks on the social media and by his opponents. The reason: the DMK and its leaders have faced flak for being anti-Hindu for their past attacks on Hindu religion and practices. They had also been bashed for greeting the minorities during Christmas and Ramazan while ignoring Hindu festivals. Stalin had also criticised the Vel yatra as an attempt by the BJP to infuse religion into the state’s politics. Of late, though, he has been trying to live down that image of being anti-Hindu and had even proclaimed that his wife Durga had visited almost all temples in the state. And holding the Vel marked the biggest departure from the DMK leader’s anti-Hindu posturing.