We Sing The Sorrow Of Helmand 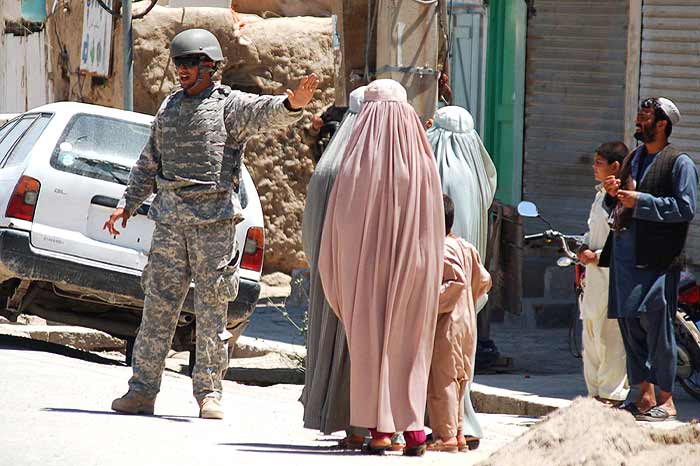 In the beginning, I wanted to make a difference. Dreamed we were a force for the good. Believed we could change this world: change it through the power of intention, goodwill, language. That was before survival became paramount. The mere act of staying alive. Alive: that single, most dangerous word. Dangerous, yes. We are never entirely ourselves until we contend with the length of the night, the fact of its infinitude, its protean, distinct shades, its inevitable end.

With its story of the stand-off between a crippled Afghan girl who identifies herself as Nizam come to bury her dead brother, and American soldiers raw from counting their own dead post a surprise storming of their outpost in Kandahar, The Watch is Sophocles’ timeless tragedy in a modern key, exploring the catch-22 that is the intervention in/for/against Afghanistan (and even before that, Iraq and Vietnam), its “featureless landscapes, futureless deathscapes”.

Simultaneously imagistic and stark, taut, tense and moving, layered through multiple first-person accounts, diary entries, ruminations, taciturn conversations, flashbacks and cussing, The Watch is a narrative of dislocation, loss, disintegration, a conflagration of hope and fear, nightmares and passions, paranoia and prescription pills, torn limbs and uncertain minds and all the different, insidious and scarred ways in which war marks people.

It’s equally an exploration of ‘otherness’—the degrees of difference between Pashtun, Uzbek and Tajik, and, comparably, a measure of the American dream: Inuit, Californian Sikh, Detroit Methodist of Iranian descent, Hispanic, the American born to Korean parents in Morocco, the American born in Minnesota, Baton Rouge, Vermont and Allakaket; the quiet American and the one fired up, straight and gay, family man and loner, rich and poor, Ivy league and drug runner, men animated by the Mississippi blues, death metal, Beethoven and rebab. And in all this is the contradiction of a country avenging freedom when its own aren’t free, an expose of the vanities by which civilisations assure themselves—most notably, ‘honour’, ‘freedom’ and ‘justice’.

The terrain of The Watch—both the humbling, haunting landscape of Kandahar as well as the inscapes of the actors in the theatre of war—is mapped with the draughtsman’s deftness, the poet’s nuanced sensitivity and a humanist awareness that commemorates equally the dead, the survivor, the one at the front, the one left behind, or the vet who returns with the violence tearing his insides.

In this uncertain, terrifying vigil, Roy-Bhattacharya places upon his readers the burden of the chorus of Greek tragedy, but desists from giving us the assurances and the moral anchor which enabled that unison of voices to comment on the unfolding dramatic action. So, in the end, as belief, judgment and contesting viewpoints are brought to a reckoning, as you return to the drama of the opening scene that was left off, literally, at knifepoint, you’re almost as complicit in the epic, tragic neurosis of bloodletting, ‘the age-old spiral of attack and revenge’, ‘badal’ and ‘payback’, so uniquely rendered.