'We Must Strengthen Our University System, Allow Foreign Institutions In' 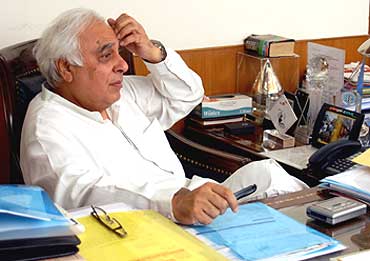 outlookindia.com
-0001-11-30T00:00:00+0553
In his first interview since taking charge of the human resources ministry, Kapil Sibal admits he's "feeling the weight". Lola Nayar asks an unusually taciturn Sibal about the proposed 'super regulator' for universities and his plans to open the doors to foreign universities. Excerpts:

The president, in her address, has said that a Higher Education Commission or a 'super regulator' will be set up. What's your timeline?

We need to work on this fast because, as indicated in the presidential address, it is part of the 100 days' agenda. So we must initiate steps to get that going. It will mean a separate or different structure will have to be put in place to ensure expansion, inclusiveness and excellence, which translate into access, equity and quality.

As suggested by the National Knowledge Commission and the Yashpal committee, will there be three separate wings—academic, grants and accreditation—under the 'super regulator'?

No government is a slave to any commission's recommendations, but these recommendations are pivotal as we move forward to restructure our education system.

Since taking charge, you have ordered a relook at deemed universities that have been accorded approval. In fact, in the last five years, approval has been granted for a large number of deemed universities. They have also been allowed to remove the "deemed to be" tag....

There appears to be no consensus over the Foreign Education Providers' Bill, permitting entry of foreign universities into the country.

You must remember that there can never be immediate consensus on issues of this nature. But consensus has to be built. We will try to build that consensus to the extent possible. I think this is something that is required—instead of our students spending $20 billion to go abroad to study, India should be the global hub of education. To do that, we must strengthen our own university system, give it more autonomy, open up to private investment within the country, and maintain standards of excellence. We must also maintain access, equity and quality and must allow foreign institutions to come in. This is perhaps a sector with the largest potential for growth, both internally and through investment from abroad.

Will foreign universities come within the purview of the proposed 'super regulator'?

We have drafted a legislation, which was approved by the Group of Ministers but never went forward. I hope and intend to take that forward, get Cabinet approval, and then bring it to Parliament.

What has been the progress so far on the Sachar Committee recommendations on minority education, such as more institutions in Muslim-dominated areas?

I have already taken a review. We shall not only implement the Sachar Committee recommendations, but shall do more than that.

We shall inform you as and when the road map is in the public domain...hopefully, within the 100 days' agenda.

What about the Right to Free and Compulsory Education Bill, which has been pending?

This is our immediate agenda and commitment to the nation. I do hope this is taken forward very soon. It has come to the Rajya Sabha after recommendations from the standing committee.

The UGC has recently come up with a national eligibility test requirement for selection to the university faculty. This has put a question mark on the future of many temporary and ad hoc teachers.

As I said, if you want quality in education, then you must ensure that all those who are in the teaching profession have acquired a certain minimum quality certification. I think tests of this nature allow students who go to the universities to at least have the satisfaction that those who teach them are of a certain quality. So such tests are a step in the right direction in the maintenance of quality.

Would you be looking at attracting more faculty members from overseas to bridge the current gaps?

We would be looking at improving the quality of the faculty and all possible sources, even outsourcing of quality faculty, shall be welcome. One of the major areas of concern has been the quality of education at the primary and secondary level. It requires substantial reforms. It is perhaps the area of greatest importance if we want India to be a knowledge society. (How it will be achieved) will be spelt out in the days to come.

What is the greatest challenge you see ahead of you?

The greatest challenge is to reform the education sector in a way that we are able to build a knowledge society in India to cater to the needs of the future generation in the area of skill development—to be either self-employed or to be adequately employable. Skill development is one way of beating recession. This (skill development and vocational courses becoming an integral part of curricula) requires a full discussion at all levels both for school curricula and at the university level. It is not something that the minister alone can decide.

Is consensus being built within the Congress on the way forward for the education sector?

The presidential address is a fair indication of the consensus already existing within the Congress on the education sector. As you know, education is on the concurrent list and most of the national schemes are implemented through the states. We would like to discuss a lot of new ideas with the states, as we would like to bring everybody on board as we move forward. The proposal to have an annual review will help us to study the impact of our schemes and improve the quality of education.