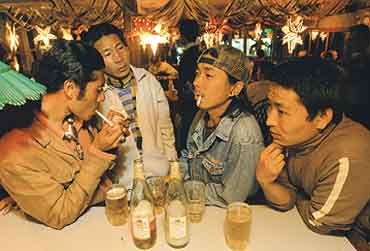 outlookindia.com
-0001-11-30T00:00:00+0553
It's spring and rhododendrons are abloom in Mcleodganj near Dharamsala, home to the Tibetan community in exile in India. But in the hearts of Tibetans hope has begun to wilt; dismay and dissent have now overtaken them. For the first time perhaps, the Dalai Lama, who is considered an incarnate of God, is being openly criticised.

It all began on March 10, observed here as the Tibetan National Uprising Day. The Dalai Lama chose this occasion, in what's the 46th year of his escape from Lhasa, to declare more emphatically than ever before: his people have given up on the dream of an independent Tibet, and are prepared to accept autonomy within China. Soon the Kashag, the council of ministers of the Tibetan Government in Exile (TGIE), sought people's support for the Dalai Lama's 'middle path'.

China, however, swiftly rebuffed the Dalai Lama's peace overtures. In the streets of Mcleodganj, Beijing's snub underscored the futility of pursuing the 'appease China' policy. And it resulted in open articulation of anger and dismay—against the policy and, slowly, even the Dalai Lama himself. Says Kalsang Phuntsok, president of the Tibetan Youth Congress (TYC), "Tibetans have realised that the Dalai Lama has human limitations and there are many problems that he cannot solve for them."

Phuntsok says the majority of Tibetans do not think that autonomy within China is a respectable way out. To begin with, the composition of the Tibetan Autonomous Region (TAR) is in itself controversial. The TGIE and the Dalai Lama hold that Tibet comprises the three provinces of Kham, Amdo and U-Tsang (around 2.5 million sq km) whereas the TAR constituted by China is about 1.2 million sq km and includes just U-Tsang and a small part of Kham province. Beijing, it is thought here, has deliberately undermined the territorial integrity of the Tibetan homeland.

Just about no one here feels the autonomy granted to TAR is genuine. As Phuntsok argues, "Instead of criticising the Chinese white paper of last May titled 'Regional Ethnic Autonomy in Tibet', the Dalai Lama has chosen to look the other way." The white paper is a long list of Beijing's boast: the formation of TAR, the autonomy it has, and the cultural and religious freedom Tibetans enjoy. It had then brusquely advised the Dalai Lama to "look reality in the face and make a correct judgement of the situation, truly relinquish his stand for 'Tibet independence' and do something beneficial for the progress of China and the region of Tibet in his remaining years".

The Tibetans here are riled that the Dalai Lama has relinquished the cause of independence, and yet had to countenance China's rebuff. It's bad politics; and it amounts to succumbing, as many say, to China's insidious motive of "biding its time for the Dalai Lama to pass away and in the meantime evade international pressure by indulging in periodic delegation diplomacy". 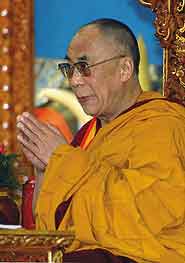 Poet Lhasang Tsering is understandably bitter: "The Dalai Lama is held captive by his international image of a Nobel laureate, a peace messiah, because of which he cannot preach anything other than non-violence." Indeed, the young have increasingly begun to talk of 'freedom struggle'. Phuntsok agrees, "I'm under intense pressure from my cadres to take up a violent course of action to achieve Tibetan independence." Even Karma Yeshi, a Tibetan parliamentarian, wants a review of the 'middle path' approach. "What have we achieved so far? How long can we keep observing anniversaries," he asks. "We have to flex our muscles and show China we mean business." Adds Lobsang Wangyal, who carved a niche for himself by organising the first 'Miss Tibet' contest, "Many among us talk of how we should disrupt the Beijing Olympics to draw attention to our cause."

The TGIE's dialogue with China has been inordinately slow. Three times in three years the Dalai Lama's four envoys have been to China to talk to the government there.Tsonam Norbu, secretary, international relations, was one of them. Speaking to Outlook, he said, "The first two visits in 2002 and 2003 were mere tourism exercises. However, our visit to China last year gave us some hope. We believe the possibility of resolving the Tibet issue can be only within the Dalai Lama's lifetime."

The impulse for a compromise has come because the TGIE and the Dalai Lama have decided to grant greater salience to the situation within Tibet instead of the aspirations of the community in exile. Tibetan leaders increasingly voice their fears about the rail line being constructed to connect the Chinese mainland to Lhasa, due to be completed in 2007. "This will spell doom for ethnic Tibetan minorities, their culture and religion will be swamped by Han Chinese," Norbu told Outlook.

These leaders would rather provide succour to the six million Tibetans back home than the couple of lakhs here in India. Here in India, the Tibetans at least have their religious freedom, education and employment. There they encounter threats of cultural assimilation. In the end, it's a choice between the illusory dream for independence and the need to preserve the Tibetan identity.