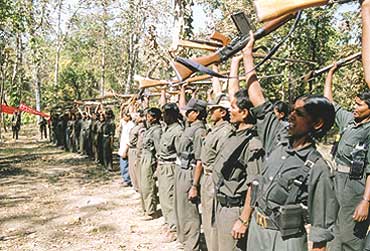 outlookindia.com
-0001-11-30T00:00:00+0553
One lesson to be learnt from the spate of Naxal violence in Andhra Pradesh last week is that half-hearted peace efforts do not pay off in the long run. They only provide a breather for outfits like the People's War to regroup and strike soft targets once the peace effort is called off. Ever since talks broke down in January this year, the Naxals have resumed their activities. And their twin targets are the same old set of police personnel and politicians.

In this renewed burst of Naxal ire, police stations across the state have been put on full alert following attacks on three different police posts recently. And in a new twist, politicians of the Telangana Rashtra Samiti (TRS) are being forced to lie low after being served notice by the Naxals to cut off all ties with the Congress in the state by the middle of this month or face "dire consequences".

TRS chief K. Chandrasekhar Rao has been unusually quiet in response to the Naxal threat. The party has made no official comment on the diktat to sever links with the Congress by June 15 or face action. Earlier, a senior Telangana-based Maoist leader issued a statement accusing the TRS of not doing enough for the Telangana cause or its development. The relatively backward and poorly irrigated districts of northern Telangana have been the traditional stronghold of the Naxals who openly support the creation of a new state for the region.

While the TRS leadership is keeping silent, its lower cadre is not taking any chances. A large number of TRS politicians are moving into the sanctuary of the state capital to avoid attacks. Others are adopting a more stoic approach to the problem. "Naxal threats are an occupational hazard if you want to be in Andhra Pradesh politics. Why should we be any exception?" asks a TRS MLA. Traditionally, it has been the Telugu Desam Party and bjp politicians who have been the targets of Naxal violence. But following the breakdown of peace talks between the government and the Naxals, Congress politicians too have now started coming under attack.

The escalation in violence has in fact been very sharp, with 117 people already having been killed by the Naxals since the beginning of this year as compared to 78 people killed in the entire 12 months last year. The number of murders in the two years prior to that was 105 and 151 respectively, suggesting that this could be one of the bloodiest years in the recent history of Naxal violence. Police encounters have claimed 77 Naxal lives this year as compared to 52 deaths last year.

However, as director-general of police Swaranajit Sen points out, the police are facing a tough challenge, with the Naxals taking the fight right into the police camp by targeting police stations. Following the collapse of the peace process earlier this year, there have been almost 10 incidents involving attacks on police stations. One of the biggest attacks took place last week when some 100 armed Naxals launched simultaneous attacks on a police station and an adjoining police post in Mahbubnagar district. The rebels, armed with rocket launchers, grenades and automatic rifles, divided themselves into two groups and opened indiscriminate fire. Two policemen were injured in the attack, but the police did manage to push the rebels back after a gunbattle lasting over two hours.

They might have succeeded in doing so in Mahbubnagar, but the Maoists completely overran the Kukunoor police station in Khammam district a few nights later. The 60 Naxals involved in the attack encountered no trouble in taking over the station and blasting it with explosives, as the lone constable on duty fled for his life. All the other police personnel stationed there were either away on leave or busy with special duties surrounding the chief minister's visit to the area.Since the station is close to the Chhattisgarh border, and prone to Naxal attacks, all stocks of arms and ammunition had already been moved from there. After the attack, the rebels crossed the Godavari river and disappeared into the forests.

The ease with which the rebels decimated the Kukunoor police station is telling. As DGP Sen himself admits, nearly a third of the state's 1,500 police stations are vulnerable to Maoist attacks. "Around 500 stations are not equipped to counter Naxalite attacks. The police cannot be expected to keep round the clock vigil at these stations," he says. He also adds that the police are often outnumbered or not armed suitably with sophisticated weapons to fend off surprise attacks.

The escalation of violence has put paid to all hopes of revival of peace talks. With the process having collapsed altogether, all there is in the offing is another protracted see-saw struggle between the Naxals and the police.

Stop And See The Light