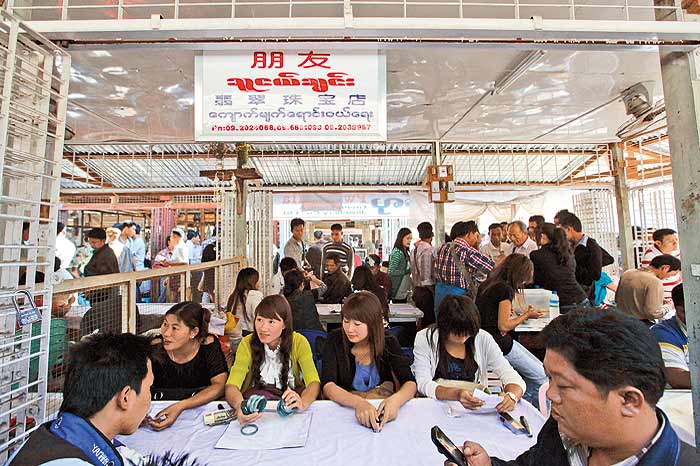 Over 50 per cent of Mandalay’s population of 16 lakh is of Chinese origin, and shop signs in the city centre are in Chinese as well as Burmese.

The Yunnan-Myanmar border is porous—opened by the Chinese when the West imposed sanctions on Myanmar. With trade came migration. Today, Chinese immigrants control the main businesses from Myitkyina to Mandalay. Some 50,000 youngsters are learning Mandarin in Mandalay.

“From here they have even gone to Yangon and have bought up properties there. The local people resent this.... Our youngsters are learning Chinese to get jobs in Chinese firms,” says Kyan Yin Myint, a writer based in Mandalay.

The sanctions of 2003 gave China an opportunity to establish a firm foothold in Myanmar. China wanted access to the Indian Ocean through the sea ports in the Bay of Bengal from Kunming, capital of Yunnan province, and it built roads from Yunnan to ports in Myanmar. It also entered the financial sector, helped upgrade the state enterprises and offered soft loans.

China is the biggest investor in infrastructure and hydroelectric projects in Myanmar—facilitating trade and transport and generating electricity for its burgeoning needs. It has access to Myanmar’s reserves of copper, zinc, coal, oil, gas, etc. China is constructing oil storage tanks at Kyauk Phyu island in the Bay of Bengal, where oil from West Asia would be stored, and pumped through a 770 km pipeline to Ruilli on the China border and then on to Kunming. This would obviate the need to ship West Asian oil through the Straits of Malacca and Singapore, saving money and time.

However, Myanmar is not to be taken for granted. Public outrage over the environmental consequences of a 6,000 MW dam the Chinese were building at Myitsone on the upper reaches of the Irrawaddy forced its suspension. The Myanmarese being independent-minded and proud of their heritage, there is resistance to Chinese influence. Some claim the Chinese are rude and aggressive.

However, considering the close ties between them, it’s unlikely that China will be treated as just another foreign power dealing with Myanmar.

As The Temple Bells Beckon