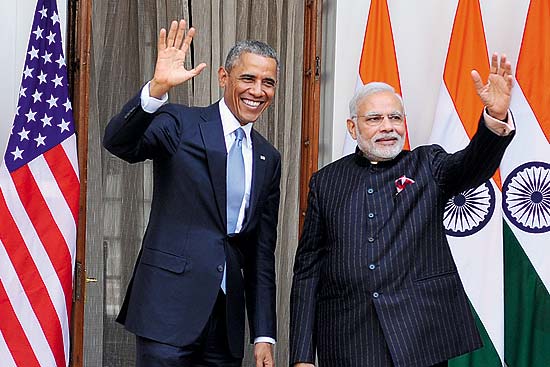 Diplomats and policymakers in India and the region may still be trying to get a grasp on the full import of Barack Obama’s three-day visit to Delhi but the Narendra Modi government is already moving on it. It’s taking steps to implement the “strategic partnership” between the two sides that firmly puts India at the centre of the US’s evolving security architecture for Asia.

Since much of the new partnership is aimed at dealing with the challenge posed by a “rising and assertive” China, Prime Minister Modi began last Wed­nesday by replacing India’s foreign sec­retary Sujatha Singh—six months bef­ore her tenure ended—with S. Jai­sh­ankar, India’s ambassador to the US and before that, for four-and-a-half years, the MEA’s man in Beijing.

A brief government statement on January 28 disclosed that Jaishankar was being appointed as the new foreign secretary for a two-year period with immediate effect. He joined on Thu­rs­day morning. And indications are that Union foreign minister Sushma Swaraj, a strong Sujatha backer, was kept out of the loop when the decision was taken. One can perhaps understand the government’s haste in rushing through the decision. Jaishankar would have reti­red at the end of the month and app­ointing him as foreign secretary then could have led to major dissatisfaction among the IFS ranks (see box).

Nonetheless, the decision managed to set off all manner of ripples in Delhi’s diplomatic circles, baffling Indian and foreign diplomats alike, especially as it comes in the wake of questions already left behind by the US president. For despite the hugs, the back-slapping, the intimate walks, the one-on-one ‘chai pe charcha’ and PM Modi’s constant refrain to “Barack” to show his growing intimacy with the US president, Obama did not hesitate to spell out a few home ­truths. Addressing a gathering of young Indians at Siri Fort hours before his departure, the US president cautioned that “India will succeed so long as it is not splintered on religious lines”. He followed it up with a reference to Article 25 of the Constitution that ensures religious freedom, pointing out that it was the “resp­onsibility of the government and every individual” to uphold such freedoms.

“Would Modi take his friend Barack’s advice and ask his friends in the VHP to shut up and request Mohan Bhagwat to stop justifying ghar wapasi,” chided Con­gress leader Digvijay Singh in a tweet soon after the speech.

“We’ve now laid our cards out more openly on China, but it’s a bit in-your-face.”

For many others, the question to mull over came from the series of statements issued at the end of the intense dialogue between the two leaders. While there is no doubt that the two sides have managed to create a platform for working with each other on a host of areas ranging from clean energy, smart cities, high tech, science and technology to enhanced investment in infrastructure development and trade as well as developing India’s manufacturing base and defence capabilities, two major problematic areas remained. One had to do with the contentious “liability issue” that had hitherto prevented the operationalisation of the 2008 Indo-US nuclear agreement. The government claimed a breakthrough was achieved by creating a “risk management” insurance pool of Rs 1,500 crore, partly borne by it and partly by companies investing in the civil nuclear energy sector. But widespread fears remain that this was done at the cost of diluting the provisions in the existing Liabilities Act by making American suppliers of  nuclear technology immune to legal action in Indian courts in the event of an accident. So far, officials have managed to gloss over its import but there are clear indications that in the coming days it will be a sticky issue for the government once the Parliament session starts.

For many others, however, it is the decision of the Modi government to get into a tight strategic embrace with the US that is the area of worry. They fear it has the potential to end India’s sovereign choices on foreign policy and security issues. Much of the focus stems from the ‘Joint Vision Statement on India Pacific and Indian Ocean Region’ the two sides signed. While it announces the intention to forge a closer partnership to promote “peace, prosperity and stability” in these regions, the reference to the South China Sea and demand for freedom of navigation and overflight has started worrying many within and beyond India.

“We have now laid our cards out more openly on China,” says ex-foreign secretary Kanwal Sibal. But he felt the references to South China Sea shouldn’t have been repe­ated in a separate vision sta­t­e­ment. “We could have avoided being so in-your-face vis-a-vis China,” he adds.

Meanwhile, the yaysayers feel the partnership with the US opens up more strategic space for India to deal with China and other countries on a stronger, equal footing. According to C. Raja Mohan of the Observer Research Foun­dation, much of the anti-American views is ideologically rooted to an “outdated third-worldism”. He argues, “China was not concerned about India when it tilted towards America under Mao and Deng Xiaoping; nor does Beijing ask Delhi when it thinks of its ties with Pakistan,” implying why should Indians bother how China now reacts to the growing Indo-US strategic partnership.

“The strategic embrace with the US will affect China ties, it’s idle to think otherwise.”

But the posturing notwithstanding, both US and India need China and neither of them want a confrontational relationship with Beijing. China continues to be an important country for the US on a host of key issues and also for the growth of the American and global economy. Ditto for India. It cannot ignore the importance of China, despite the fact that it has not been an easy relationship. India continues to seek heavy investment for developing Indian infrastructure and also needs its support, along with that of the Americans, to find a place in a restructured UN Security Council and many other important world bodies.

“The strategic embrace with the US will, of course, impact our ties with China. It is idle to pretend otherwise,” says Srinath Raghavan of Delhi’s Centre for Policy Research. He feels this has unnecessarily put India’s credibility at risk, especially if a crisis erupts on the South China Sea.

How Modi now manages to leverage his growing closeness with the US vis-a-vis China will unravel in the coming days, especially when he travels to Beijing in the spring. An antagonistic relationship with Delhi’s largest neighbour can hardly be seen as helpful in implementing his much-touted developmental plank for the people of the country.

“Important Matters Have Been Dealt With Hurriedly”