Underwhelming, especially in the face of its six Oscar nominations. 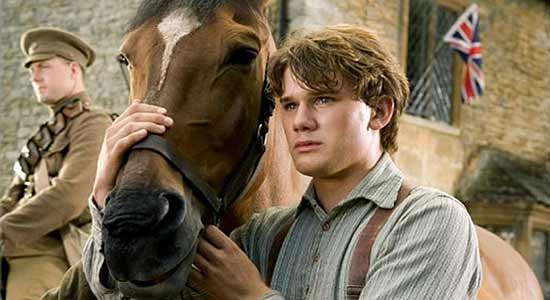 What strikes you about Steven Spielberg’s War Horse is the breathtaking landscape and little else. It’s pretty much the only element that stays on in mind. Besides, of course, the magnificent shots of a steed majestically galloping away in the countryside, racing with a car and riding in war trenches against the gunfire.

The story of Albert’s love for Joey, his horse—from birth to his training as a plough horse—follows a predictable route. Like an epic star-crossed romance, they meet, get separated and meet once again. The setting, WWI, plays the villain. Joey is given away to an armed battalion by Albert’s dad to settle a debt. There’s a brief, peaceful idyll in the shadow of a windmill with a young French girl, Emily, and her granddad. This gets broken again by the war as Joey keeps swinging between the two belligerents.

War Horse is underwhelming, especially in the face of its six Oscar nominations. It is much too long and dreary, stretches on endlessly and eventually turns more mawkish than sensitive. The emotions don’t run deep, the teary eyes—far from tugging at heart-strings—feel fake and facile. The anti-war message needs a fresher narrative to hit home. Such old-fashioned story-telling does not move our cynical hearts anymore.

The only sequence that worked was the coming-together of the enemies, Britain and Germany, to rescue Joey when he is caught in barbed wire in no man’s land. They almost get into another war over him till the toss of a coin settles things.