By going after Bihar criminals like Shahabuddin, two officers have redefined governance 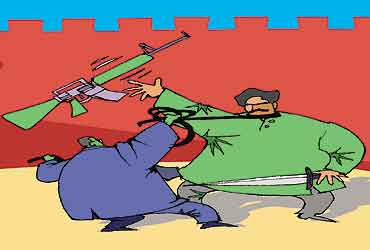 By reading out the law to Mohammed Shahabuddin, MP, in his own language, the duo has redefined the lingua franca of governance in Bihar. Raids on the MP's house have revealed tiger and deer skins, night-vision goggles, laser-aided guns and other arms with Pakistani ordnance markings. Photos of Shahabuddin with some of India's most wanted criminals have also been seized. In other words, a man who sits in the hallowed halls of Parliament is a national security threat! And the Union government still gives him Z-category security! What a shame!

Can Shahabuddin explain to the nation why, and how many times, he visited Kashmir in the past four or five years? Did he go there to procure the rocket-launchers with which he fired on SP B.S. Meena? Lastly, where are all the people who have vanished from Siwan? Every child in Siwan knows where these people vanished, and where more than a hundred bodies lie buried. The government should order this graveyard, in the MP's own backyard, to be exhumed, scientific identification done and the pictures displayed for the nation, so that the shame is made public and not hidden. Bihar's chief commissioner, I-T, should seize all properties known to be owned by or captured by him through benami methods, and auction them; reopen his tax returns, freeze his bank accounts. He has violated almost every law of every department and yet no one has questioned him till date!