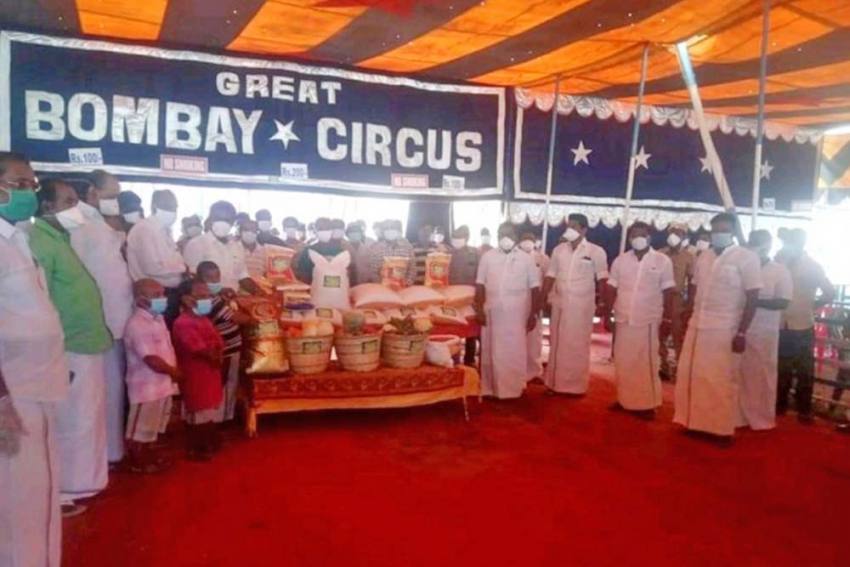 Food items being given to the circus stranded in Chennai
G.C. Shekhar May 01, 2020 00:00 IST Walking The Tight Rope 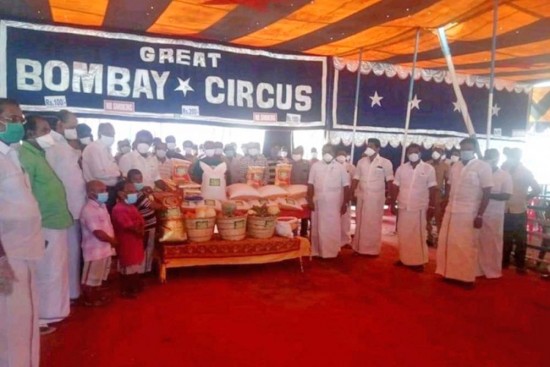 Circus: along with memories of unalloyed childhood happiness and wonderment, the word conjures up a world of barely-there make-believe, gaudy paint, tinny music, betasselled costumes of trapeze artistes, the sudden burst of wild animal smell—all so tangibly lifelike for its being rough to the touch. Then there are the tear-stained characters smiling under the arclights—so beloved of writers, artists and filmmakers. It has been driven to near-extinction for long, as entertainment moved from the old telly to virtual reality wearables. Now, the few barely surviving has been dealt a fatal blow by the lockdown. Like the 100-year-old Great Bombay Circus now touring Tamil Nadu.

The circus had pitched tent at Mannargudi town of Thiruvarur district since February 27 and had been attracting a lukewarm response except during weekends. Since the March 26 lockdown, its performers have nothing to do. With no revenue, performers and animals faced starvation till locals decided to step in. The state food minister R. Kamaraj led by example—arranging provisions for performers and instructed the animal husbandry department to give fodder for the animals that include camels and horses. Local grocers pitch in too whenever the circus manager alerts them about rations running low.

“Ever since the clampdown on performing animals, big cats, elephants and monkeys cannot be part of any circus in India. We only have a couple of camels, four horses plus a few macaws and dogs. There is a 134-strong staff, including performers and maintenance staff from different states eager to return to their homes as there’s no income,” says manager M. Ramesh. While local performers were paid Rs. 1,200 a day, those from Ethiopia and Ukraine (who returned home after the Chennai leg was truncated) earned Rs1,800 a day. “We need at least Rs 25,000 a day to feed the troupe and animals and Rs 5,000 to buy diesel for the generator. True, we are getting three meals a day thanks to locals and volunteer groups. But since workers are unable to send money back home the mood is one of despondency,” Ramesh adds.

Even though the few surviving Indian circuses have jointly appealed to PM Modi for a loan to tide over this existential crisis, the bleakness extends into future prospects—post lockdown, it is unlikely that audiences would be allowed to assemble. Forlorn employees hope the state government would help them get back once trains start running. The Great Bombay Circus was founded in 1920. In its hundredth year, their Big Top could be consigned to history.