Waifs Of The Gutters 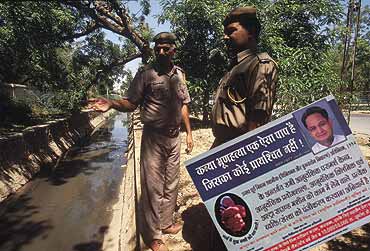 outlookindia.com
-0001-11-30T00:00:00+0553
The drains of Alwar are throwing up fresh, barbaric evidence of India's bias against the girl child these days. In the ditches and festering garbage heaps of this nondescript Rajasthan town, aborted foetuses and carcasses of abandoned newborns, mostly female, have been making grisly appearances. Limbless, headless, animal-nibbled, decomposed...these tiny bodies of unborn, just-born babies repeat an old, nauseating narrative: of extreme prejudice and putrefied morality.

The horror unleashed itself early this month, when Alwar's municipality began cleaning drains in time for the monsoon. Two foetuses, in a highly decayed state, were discovered in a sewer near the town's G.D. Government Girls College on June 8. Three days later, panicky Arya Nagar resident Babu Lal Saini called up the police after a stray dog dragged a headless female foetus to his doorstep. Saini shudders in recollection: "Her umbilical chord was still intact, little nails had developed on the only hand left in her body clearly showing that she had been aborted very late in the pregnancy. I had never seen anything more gory." There was, however, more to come by way of shock. Alert to the issue of "balika bhrunhatya" (female foeticide) by now, a vigilant local media reported yet another discovery of killed unborns. This time over a dozen decomposed foetuses and dead newborns, a mass of decayed flesh in a sack.

The local police is not buying this story. They are admitting to "only" three dead foetuses. An irate Alwar superintendent of police, B.R. Gawala, is in fact very upset with the "sensationalist local press" for reporting a high baby bodycount and talking needlessly of female foeticide. Gawala says the horrific discoveries are no more than a case of "disregard for the dignity of the human body by the town's parents and doctors". He promises to instil some "psycho-fear" in the town's neglectful doctors and parents, so that they don't dump foetuses all over the place again.

The police has already sent notices to 19 nursing homes and ultrasound/sonography laboratories in the town demanding records of abortions and pre-natal diagnostic tests conducted in the past two years. And that is just the tip of the iceberg: Alwar has a lot more unlicenced maternity homes and labs where sex-determination tests are conducted routinely, if secretly. Gawala doesn't even know "exactly" how many of the nursing homes and clinics have replied to notices. (The reality is that only a very few have.)

The callousness is mind-numbing, considering the fact that fresh census data have shown up a severe decline in the numbers of girl children in the sex ratio for the 0-6 age group over the last decade. In 1991, there were 945 girls for every 1,000 boys, 2001 registered only 927 girls. For Rajasthan, the figure is even lower at 909.

Alwar's drains and garbage dumps this month have seemingly been throwing up this very deficit of girl children, slaughtered. Evidence of such murder is rife all over Alwar: private nursing homes, diagnostic labs, grubby illegal chemists dot the place. A large number of two-storeyed homes hawk themselves as nursing homes or labs: the owner-doctor's family usually stays upstairs while brisk business is conducted on the floor below. Even nurses have set up abortion and delivery centres. Alwar's medical deputy chief and health officer,

Dr J. Singhal, haltingly estimates that there "may be over 20 pre-natal diagnostic labs here, many hospitals, and then quacks". Singhal says he has instructed the nursing homes to maintain proper registers of tests and abortions, print consent forms for both in the local language, and prominently exhibit their licences and anti-female foeticide posters.

These are mild measures in a town where it is pathetically easy to determine the sex of an unborn child.It can be done for as little as Rs 600 to Rs 700. Aborting a female foetus is slightly more expensive: upwards of Rs 5,000, depending on how late it is in the pregnancy. Dr Vijay Gupta of Vijay Ultrasound Centre, one of the town's busiest, is reluctant to "get into this foeticide controversy". He claims he only tests patients who are referred to him by doctors. The buzz, however, is that doctors send in patients to labs for a commission, and are known to ask for the sex of the foetus. Something Dr Brajendra Garg of the Garg Hospital in Arya Nagar says he has never done. Nor has he ever aborted illegally. It is sheer coincidence then that a dog dragged in a female foetus to one of his neighbour's doorsteps. "Some dai (midwife) must have done this, and an animal must have dug out the foetus and brought it to my neighbourhood," he says.

Gender discrimination in Alwar doesn't begin or end in the womb. "Female foetuses are aborted all the time. It happens even in affluent families. Girls are seen as a financial drain, to be married with dowry," avers Sachi Arya of Pragatishil Mahila Samiti, a collective working for women's rights in Alwar. Amit Chaudhary—who has been coordinating Child Line, a local helpline for distressed children, for well over a year now—agrees: "A bulk of our calls are from girls who complain of their male siblings being treated much better than they are. The frustration at not being allowed to study among girls is distressingly high." No wonder the literacy rate for women in Alwar district is a disgraceful 43.97 per cent and 78.91 per cent for men.

Alwar's collector Tanmay Kumar is visibly shaken. Unlike most of the town's administrative officers, he doesn't quibble over the sex of the killed unborns. He confesses: "Doing away with girl children has been too easy for parents and doctors, but we are going to change that." He has ordered the advisory board, which was constituted under the Pre-Natal Diagnostic Technique (Regulation and Prevention of Misuse) Act, to monitor laboratories and maternity homes more rigorously; sanctioned new publicity material to dissuade people from testing the sex of their unborn child. He shows the posters that are already being pasted vigorously all over town. The message is lucid: "Female foeticide is a sin that has no atonement." If only more parents believed so.