As Indian TV's biggest reality show, Indian Idol, peaks to a close, the rules of television success have been rewritten 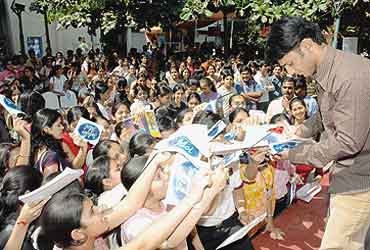 outlookindia.com
-0001-11-30T00:00:00+0553
The dramatic lead-in music to Indian Idol plays as Abhijit Sawant walks into his hotel room. It is only the ringtone on his new phone, though. He softly tells the girl on the line when his birthday is and that his favourite food is dal and rice. Excited, the girl tells a smiling Sawant he looks like Rahul Dravid. Really. The routine continues for as long as 24-year-old Sawant takes calls.

The best thing about reality television is that it actually says more about the viewer than it does about the stars on it. So is that why Indian Idol is doing so spectacularly well? Is Indian Idol what we viewers want it to be, or better still, who we want to be?

That's still not quite certain, but as the show builds up to its March 5 finale, some things are already very clear. It has been Sony Entertainment Television's biggest success, finally breaking the stranglehold Star TV has on the industry listing of the top 10 TV shows. Audiences have swelled while the show used a combination of audience voting and judging by a celebrity panel to narrow a field of several lakh aspiring film playback singers to a shortlist of three (which will come down to two by the time this piece is printed)—Sawant being one of them—that will vie for the grand prize of a Rs 1-crore recording contract—and serious stardom.

The show's biggest success has been in its sheer interactivity. People aren't just tuning in, they are watching it like hawks, and responding fast to what they do or do not like, a marketer's dream. Each show now generates an average of 3 million votes. Nearly 1.2 million, in itself a record, come in on sms from viewers' mobile phones.

In fact, Sony's also reporting higher viewership for its programmes like Crime Patrol and CID, which come on after Idol. And there are several fans, like 18-year-old Poonam Sundesha, who even call journalists, urging them to try and get their favourites brought back on the show. 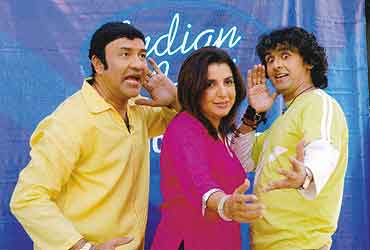 Recently there was a huge fuss among viewers after a talented singer, Rahul Saxena, was voted off the show. Still, he can bask in the knowledge that Hindi film music director Anu Malik, also a judge on the show, has offered him work.

With such intense and involved popularity at stake, the three shortlisted finalists at the time of writing know just how much viewers' votes matter. That's why Sawant says, "You have to be nice to everyone, woh bhi votebank ho sakta hai." But since Indian Idol is also the country's first bonafide reality hit show, no one's quite sure how viewers want themselves reflected. It is something of a Rorschach test for audiences. Are we the poor painter types or the cutesy teenaged star types? Do we vote for sob stories of sore throats on competition day or glamorous talent?

Argues another finalist, the preternaturally poised Rahul Vaidya, "Usko sarva gun sampann hona chahiye (he should have every positive quality). He should be confident, impressive, good-looking and of course, sing well."

Amit Sana, his nerdy competitor, seems acutely aware that he really only satisfies Vaidya's last criterion. So he's trying hard to compensate. Sana is lounging in nondescript whites when he is told about a photo shoot. Alarmed, he vanishes, asking for a stylist. In half an hour, he emerges wearing gelled spikes in his now purple hair, square glasses and a bright graphic print T-shirt. Meanwhile, Sawant is still on the phone, garnering votes.

In a country where most stars seem to come straight out of star families, having the power to make a real star is a very attractive proposition for the show's audience, especially the ones that vote. So, talented singers thrust at the mercy of the Indian voter takes the high emotion, drama and audience involvement of a television serial, into a real life setting.

When the off-key but popular Ravinder Ravi, a house painter from a Jalandhar slum, was voted out, dozens of fans turned up at his hotel asking him to stay on. Even show producer Tarun Katial's mother quizzed him on why Ravi couldn't make it.

Of course, Idol isn't the only reality show of its kind on Indian TV. And although judges Anu Malik, Farah Khan and Sonu Nigam are famous, they aren't the only celeb judges around, either. Sony has taken a gamble by taking an existing format—it's very similar to the successful US show American Idol—tweaking it to Indian tastes by linking the programme to Hindi films and, above all, pushing it aggressively. Sony has reportedly spent Rs 10-15 crore on promoting Idol, several times the amount rival shows have seen. 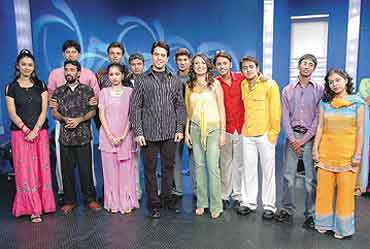 As a result, once the lakhs of applicants were whittled down to a mere 21,000 that made it as far as an audition to select the 130 who would actually appear in the show, audience interest had already built up. It rarely dipped thereafter.

Naturally, advertisers have been watching all this with interest, and are now even tying up for in-show promos like a shampoo company's ads using contestants' real stories. "What Idol has shown for the first time is that television can really be interactive and that there is money to be made in it," says Manish Porwal, general manager of media-buying outfit Starcom.

And at the heart of this success are the gawky Sawant, the scrawny Sana and unnaturally poised Vaidya, who are on the verge of vote machine stardom, in an industry known for its love for stars and the fear of unknowns.

In a few weeks, when the showlights close they will make their way back to those queues of singers trying to meet Bollywood music directors. Except, this time, many of the directors they go to meet will have voted for them.

So, they are learning slowly to behave like stars, a subject on which they keep giving each other tips. After all, like any star worth his or her salt, they have a marketing machine and a votebank behind them already.