Vision To The Blind

Politicos are out, 'conscience' votes could go the Islamist way 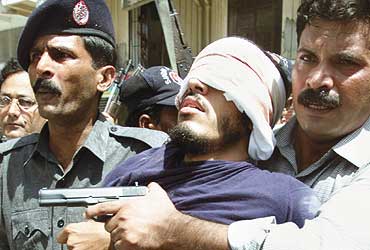 outlookindia.com
-0001-11-30T00:00:00+0553
When the Pakistani police swooped on the third-floor apartment of the posh Defence Housing Society on the night of September 10-11, they hadn't expected to encounter stiff opposition from Al Qaeda fugitives. Bursting teargas shells and engaging in a fierce gunbattle that lasted over three hours, the police killed two and apprehended six militants, including two Arab women. Among them was one person whom the fbi had been in hot pursuit of: Ramzi bin al-Shiba, thought to have played a significant role in planning the wtc attack last year and the murder of journalist Daniel Pearl.

The FBI and the police are, understandably, elated at the catch but others feel the ferocious battle is an ominous warning to Karachi—and the military regime—about the bloody future awaiting them. They fear the presence of Al Qaeda militants in the city could also cast a sinister shadow on the general elections, about three weeks away.

There's a veritable sympathy wave for Al Qaeda in the streets of Karachi. Daubed on walls are chilling slogans—'Death to the US', 'Fidayeen attacks on US will continue' etc—that are grim testimony to the Islamic militants' resolve. Even residents of the Defence Housing Society seemed to sympathise with those who were firing on their own country's police. Mohammad Haroon, a banker, voiced the popular sentiment, "They are mujahids and our police and Rangers are puppets of the US."

Obviously, Al Qaeda's principal objective is to escape the wrath of the US. But as they scurry from one hideout to another, its members have also combined with Pakistani militants to physically target Pakistan President Pervez Musharraf, or at least weaken his grip over power.

Intelligence sources say they have unravelled three aborted attempts or plans to assassinate the president in Karachi. The first two attempts on Musharraf were made on April 26 and 27, when he flew down to Karachi to garner support for the referendum. First, they tried to blow up a car near the airport but failed because of a technical snag. They then planned to assassinate Musharraf on April 27, at the time he was to inaugurate the Lyari Expressway. But what saved the president was that he arrived at the ceremony three hours late.

Intelligence sources say they stumbled upon the third plan during the interrogation of a Chechen militant, Hafiz Saleem Sakarov, whom they nabbed in Karachi on the April 24-25 night. They say Sakarov, whose arrest hasn't been made public, had planned to pack explosives in a metal pole utilised for hoisting flags at public meetings.

It's believed Al Qaeda operates through groups such as al-Alaami and has been involved in all major terrorist incidents here—in the killing of 11 French engineers and the US consulate bombing. Sources also say Osama bin Laden's close aide, Sheikh Khalid (whom Al Jazeera channel interviewed with al-Shiba), was the person who slit Pearl's throat.

Says a police source, "There is no doubt that the banned Pakistani militant groups, particularly Lashkar-e-Jhangvi and Jaish-e-Mohammad, are among the hosts of Al Qaeda and the Taliban, who provided the Pakistani groups training camps in Afghanistan under the Mullah Omar regime."

In Karachi, thousands of madrassas opened their doors to the fleeing Arabs. But few are willing to accept this openly. Mufti Mohammad Jamil, spokesman of Jamia Binoria, the biggest religious seminary in the country, told Outlook, "They are our Muslim brothers and the 300,000 students are followers of bin Laden, but we have not provided any shelter to Al Qaeda men nor did they come to us."

The presence of Al Qaeda in Karachi has alarmed the Muttahida Qaumi Movement (MQM), which represents the Mohajirs and considers the city its bastion. The MQM fears the militants, who in many sections of the population are considered heroes, could wean away their supporters into rallying behind the Muttahida Majlis-e-Amal (MMA), an umbrella group of religious parties that has been formed to contest the October 10 elections.

Many fear the Islamists could step into Pakistan's political vacuum. With liberal and popular politicians like Benazir Bhutto and Nawaz Sharif nudged out of the elections process, the electorate could vote Islamists to vent their disenchantment against the military regime. Says political analyst Prof Tauseef Ahmed, "Unlike in India, where extremist parties are in power, the religious parties here have had a poor record. But Musharraf's decision to keep Benazir and Sharif out has provided an opportunity to the mma to grab more seats."

With every prominent member of the mma boasting its own militant wing or jehadi group—the Jamaat-e-Islami backs the Hizbul Mujahideen, Jamiat Ulema-e-Islam (JUI) favours the Jaish-e-Mohammad and the Harkat-ul-Mujahideen, and Tehreek-e-Jafria favours the Sipah-e-Mohammad—it won't be surprising to find the militants play an increasingly significant role among the country's underclasses. "The MMA is the last hope for jehadi organisations. Thousands of madrassa students and underground activists of banned groups are actively participating in mma meetings and rallies," says Mufti Jamil.

The government's decision to lower the voting age to 18 has franchised an additional two lakh madrassa students, all die-hard supporters of bin Laden. They are expected to rally behind the mma banner. No wonder Jamaat leader Osama bin Razi sounds optimistic: "With religious parties now united on one platform, we expect to improve upon our 1997 performance." Then the JUI had emerged as the biggest religious party, bagging four National Assembly and seven seats in the Baluchistan assembly. Political observers feel the mma may get 10 to 15 National Assembly seats.

Says a former administrator of Karachi, Fahim Zaman, "The mma is not likely to form the government but its result and success will help promote jehad in Kashmir and Afghanistan." Mufti Jamil agrees, claiming this election could enable the mma to gradually occupy a far bigger political space than it had till now.

Nervous about the chances of religious parties in the elections, American embassy officials handed over a questionnaire to the mma, eliciting its stance towards the US. Showing this letter to newsmen recently, mma leaders said that if voted power, they would adopt the "policy of live and let live with all nations".

As Pakistan lurches towards yet another tryst with skewed democracy, and militants play a significant role in it, there's general acceptance that Al Qaeda and its hosts want to oust Musharraf. Their success will depend on the kind of support they muster from within the establishment.