Vision Impossible: Coffin Up The Money

Forget Bofors, bullets, bombs. The CAG report indicates that lucre can be found even in aluminium caskets and bodybags. 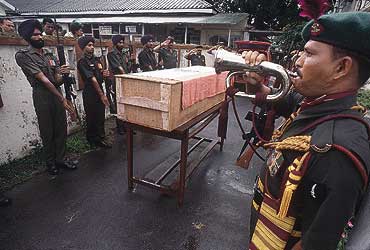 outlookindia.com
-0001-11-30T00:00:00+05:53
The terrorist strike on Parliament may have taken the focus away from the coffin scam for the moment but the defence minister, George Fernandes, could well find himself in a tight corner once the issue resurfaces. Considering the high emotive value surrounding this controversy, it will not be long before the Opposition parties stoke the embers, especially with crucial assembly elections due in Uttar Pradesh, Punjab and Uttaranchal early next year.

The charges levelled against the ministry of defence (MoD) by the Comptroller and Auditor General (CAG) is that it placed orders for aluminium caskets to bring bodies of soldiers killed in the Kargil war at a highly inflated price—$2,500. Similar caskets were procured by the Indian contingent in Somalia for $172 in 1994. Fernandes has been hard pressed to put up a defence in Parliament all of last week.

His claim that the aluminium caskets purchased in 1994 by the UN mission in Somalia for $172 each was based on "hearsay" is proving slippery. Records in possession with the CAG office and documents with the defence ministry clearly contains a 1995 proposal by the army's Western Command, stating that the aluminium caskets were indeed bought for $172 and that the UN mission had paid that amount for them.

A senior army officer who served with the Indian contingent in Somalia confirmed to Outlook that the caskets had been procured at that price. "The price mentioned in the CAG report is absolutely right. It was 172 dollars," he said.

Investigations by Outlook show that a four-page "statement of case" made out by the Master General Ordnance (MGO) branch in army headquarters and subsequently forwarded to the MoD was part of the papers given to the CAG office by the defence ministry. The statement makes out a strong case for the purchase of 150 aluminium coffins as it was cost-effective and would come in handy for insurgency-prone areas like the northeast and Jammu and Kashmir.

Highly placed sources in the CAG office said its findings were based solely on documents in defence ministry files. "The statement of case was part of the papers for 123 contracts worth Rs 2,163 crore which we reviewed. And that is how we arrived at our conclusion—through notings on files and not on hearsay, as is being alleged," says a top-ranking official.

The MGO statement even details the specifications of the aluminium caskets—85 inches in length, 17 inches in height and 28 inches in breadth—and makes a clear reference to the recommendation of Brigadier K.R. Bhagat, the commander who led the Indian army contingent (66 Infantry Brigade) in the UN peacekeeping mission in Somalia in 1994. Here, it is stated that the coffins were purchased by the UN mission for $172. "There is a reference to a company called M/s Landon Ind Inc, based in the US, where the caskets were sourced from," says a CAG official.

This is at variance with a report in the media quoting Buitron and Baiza, which bagged the questionable 1999 contract, that they had supplied caskets to the contingent in Somalia. In fact, it was Landon Ind Inc which provided the coffins. The company has since closed down but CAG officials point out that this does not detract from the fact that the caskets were available at $172 in 1994.

It was the Indian army's quest—post-1995—to procure aluminium caskets on a permanent basis that they began to tap other sources. Union law minister Arun Jaitley, who took up cudgels on behalf of Fernandes, referred to a letter written by India's military attache in the US, Arun Roye, on April 30, 1997, where he mentioned that Landon Ind Inc was not listed in the directory.The larger point Jaitley was trying to make was that since the company Landon Ind Inc did not exist, both the name of the company and the price of $172 for a casket were based on "hearsay".

However, CAG officials point out they had no quarrel with Jaitley's contention. "We knew Landon Ind Inc had closed shop many years back and this was mentioned in the statement given to us," said one official.

It was for this reason therefore that the MoD began liaising with the US-based Buitron and Baiza and concluded a contract for 500 caskets and 3,000 bodybags totally worth Rs 6.55 crore, which ultimately turned out to be a sour deal. The price negotiated worked out to over Rs 1 lakh approximately ($2,500) for each casket. The MoD did not tap any other source or look for cheaper options.

Though the CAG has been scathing in its observations on other critical supplies like ammunition, arms and clothing, it is the casket issue which has raised the hackles of the Opposition. An inflated sum of Rs 1.47 crore paid for 150 aluminium caskets which, first, arrived late and were then rendered unusable has only fuelled problems. Each casket was to have weighed 18 kg but the ones which arrived in February 2000, several months after the Kargil war, weighed an unmanageable 54 kg!

The CAG also points out that despite the caskets being a new purchase, no acceptance tests and evaluation were carried out. In addition, "there was also no indication either in the record of the minutes of the Price Negotiating Committee (PNC) or scrutiny in the ministry" of the reasonableness of the cost. As in the other purchases gone through in Operation Vijay, this too was done in view of the urgent need to lift bodies from the Kargil sector.

CAG officials told Outlook that they had written several times to the defence secretary to explain the discrepancy in the contract. Most of the reminders were sent out during March and April this year when the report was in the final stages of preparation. "We asked the ministry to give us replies to our queries within six weeks. This was not just on the coffin issue but on other procurements as well," says an official. But finding no response forthcoming on the aluminium casket contract, the CAG had to conclude that the ministry did not have an adequate response.

Short of stating that the aluminium casket contract was a "dubious deal", the CAG report makes it a point to emphasise that the "price paid would convert to a rate of Rs 45.31 lakh per tonne of aluminium which is at least 10 times more than the rate being paid by Hindustan Aeronautical Ltd (HAL) importing the highest grade aluminium". Officials from the Bangalore-based HAL told Outlook that the high-purity grade alloys it used for the main fuselage and wings for the aircraft it manufactures were imported from France and Germany at Rs 250-300 per kg. "As for the normal purity alloys, used for cubicles and fuel drop tanks, we pay Rs 100-150 for a kilogram," says an HAL official.

If the coffin scam and the grave financial indiscretion in emergency purchases of weaponry was not enough, the CAG report also slams the defence ministry on not providing benchmarks for the procurements. Audit scrutiny of case files revealed that in most cases, "last purchase prices were neither available not taken into account by the PNCs". The report concluded that there was such great variance from final prices that these did not provide a basis for reasonableness of suppliers' prices.

Of the 125 contracts reviewed by the CAG, it found that in 35 cases there was a "relaxation of rules and procedures" which led to the government paying Rs 44.21 crore more for certain items. It also ordered supplies worth Rs 260.55 crore which did not meet qualitative requirements and was saddled with shelflife-expired ammunition aggregating Rs 91.86 crore. Besides, ammunition worth Rs 342.37 crore was contracted for import on grounds of operational emergency even though it was manufactured indigenously in ordnance factories and public sector units.

The Vajpayee government may be subjected to one more bout of noisy inquisition on the issue of defence deals if demands to table Central Vigilance Commissioner N. Vittal's report gets strident. With the Opposition already gung-ho after the CAG's cutting report, this is like a double-whammy for the government. Vittal's exhaustive report, submitted on March 31—a scrutiny of all deals post 1989—is categoric that India's defence security has been compromised.

In his report, Vittal refers to "serious irregularities" in the purchase of spares and equipment and also points out that proper procedures weren't followed while awarding contracts for spares. Even in the case of purchases during the Kargil war, some of it in record time, Vittal has maintained that commissions were paid to bag contracts. Vittal's report is a culmination of the investigations ordered by Fernandes on February 14 last year into 75 defence deals that had been signed and executed since April 17, 1989.

"That was the cut-off date when a policy decision was taken not to allow middlemen in any arms deals," says a defence ministry official. In this connection, all deals worth Rs 75 crore or more were examined by Vittal after going through over 500 files.

Following the strong indictment by the CAG office on the emergency procurements during Operation Vijay, defence ministry officials are tight-lipped on the next round of emergency procurement of arms and new-generation weapons. With enhanced threat perceptions and fearing that the subcontinent's stability could come under threat, the defence ministry had drawn up an entire inventory of weapons pegged at a whopping Rs 8,000 crore for the three services. The tab for the army and the paramilitary forces was estimated at nearly Rs 6,000 crore.

Some of the critical equipment recommended include surveillance and target acquisition arms such as six helicopter-mounted surveillance sensors and 1,000 hand-held thermal imagers. Among the new-generation weapons, it has been decided to go in for 14 SMERCH multi-barrel rocket launchers—which could cost over Rs 1,200 crore—10,000 extended-range rockets and Tunguska launchers and missiles.

The "emergency" tag obviously means that competitive bidding for much of the weapons and equipment on the wish-list will be given a go-by. In some cases, the MoD says it might have to rely on single-vendor sourcing. Knowing that the current procurement system is hostage to many inordinate delays, the ministry was planning to sidestep the red tape. But with the CAG report coming down hard on the defence establishment, it will be forced to do a rethink on the matter. It simply cannot afford another round of controversy.