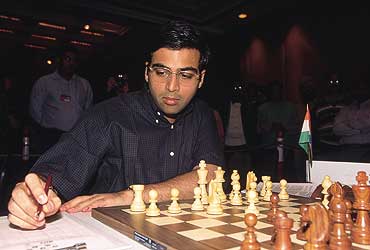 Child prodigy, International Master at 15, youngest national champion ever at 16, Grandmaster at 17, first Asian to win the World Junior Championship, the youngest Indian ever to win the Arjuna Award, winner of the Reggio Emilia in 1991 ahead of legends Garry Kasparov and Anatoly Karpov, first Indian World Chess champion, and the greatest Indian exponent of a game that was invented in this country. Armed with a brain that would put even a computer to shame (some go to the extent of saying that he remembers each and every move of every game he has ever played), an almost other-worldly intuition, and an aggressive playing style reminiscent of the legendary Bobby Fischer, Anand first caught the world's attention when, as a 15-year-old, he defeated his first Grandmaster, Jonathan Mestel of the UK, in a sharp and bloody battle in just 25 moves. He has never looked back since then, conquering every peak on his way (well, nearly every one of them: he is still to beat Kasparov in the World Championships), and been the catalyst for the emergence of a number of stunning young chess talents from across the country. And, in spite of his impressive wealth and worldwide fame, Vishwanathan Anand has managed to remain a humble and normal human being, the same boy-next-door from Chennai he has always been.