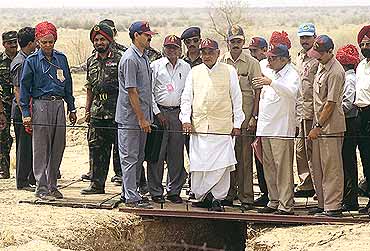 outlookindia.com
-0001-11-30T00:00:00+0553
When India conducted the nuclear tests in Pokhran five years ago (May 11 and May 13, 1998), it was construed as a veritable explosion of national pride and esteem. Those who supported the tests hailed it as the big bang announcing the country's entry into the exclusive club of nuclear powers. Those opposed to Pokhran II, however, thought the nuclear tests were aimed at merely generating an inexorable electoral wave on which the bjp—already wobbly, thanks to the demands of its NDA allies—could return to power on its own in a snap mid-term poll.

Obviously, Prime Minister Atal Behari Vajpayee and his colleagues brushed aside these arguments. Pokhran II, they argued, was undertaken to provide muscle to India's security and warn 'enemy nations' against harbouring insidious designs on the country. It was a measure, they said, aimed at enabling Indians to live in peace, without the spectre of external attacks.

The Sangh hotheads were jubilant. vhp leader Ashok Singhal convened a press conference to say Pokhran II had established India's credentials as a superpower and that Indians could no longer be cowed down by the West. The sober nationalist hoped India would now be a permanent member of the UN Security Council.

But has Pokhran II yielded these dividends? There was first the Kargil intrusion. Terrorists incidents continued to spiral, culminating in the attack on Parliament on December 13, 2001. Then followed the massing of troops on the Indo-Pak border for 10 long months, draining the country's resources and inflicting heavy peacetime human casualties. Nor was Pakistan any less adventurous—and shrewd, consciously projecting nuclear nightmare scenarios to turn the international spotlight on Kashmir as never before.

Other expectations were also belied: the Security Council seat didn't materialise because the august body didn't witness expansion. Nor did the US recognise India as a nuclear weapon state in the way the Non-Proliferation Treaty (NPT) recognises the P-5. The exclusivist nuclear club still refuses to transfer the technology our scientists crave for. In short, Pokhran II hasn't accorded a status to India its politicians had hoped for.

But don't rush to judge Pokhran II on such assumptions. For one, nuclear weapons aren't a hedge against terrorism. It's a point easy to comprehend were you to remember that the mother of all terrorist attacks—9/11—occurred in the US, the ultimate repository of nukes. Nor is it strictly true that the US and others don't recognise India's nuclear status. For instance, the US administration has not issued injunctions on India, capping, rolling back or eliminating its nuclear weapons. Washington now accepts the fact that India will retain its nuke arsenal.

There could have been greater depth to Indo-US strategic relations but for 9/11. India's response to Bush's National Missile Defence initiative had prompted Washington to look more understandingly at New Delhi. But with Pakistan becoming a frontline state in the US' war against terror, the US lapsed into the predictable Kashmir-as-flashpoint mode.

Western analysts don't concede that nuclear weapons have increased stability in the subcontinent. Says Michael Krepon of the Stimson Center, Washington: "Nuclear dangers on the subcontinent have clearly increased since Pokhran. It's natural for tensions between nuclear-armed adversaries to rise. When haven't they? They will start to fall when Islamabad and New Delhi agree to nuclear stabilisation measures. Similarly, the nuclear dialogue between New Delhi and Beijing has also been disappointing, but bilateral tensions were low pre-Pokhran and they have returned to this norm."

Some feel Pokhran II was to Pakistan's advantage. Says a western diplomat: "1998 didn't change anything for India because everyone knew weapons were already there.Therefore, the benefits of presumed possession just carried over. It was Pakistan that became confident that its device worked."

Admiral (retd) L. Ramdas feels Pokhran II hasn't impacted dramatically because the concept of warfare doesn't change with weaponry, nor does the theory of deterrence. He argues, "Just as nations haven't really been deterred by overwhelming conventional weapons superiority of their adversaries, so also is the case with nuclear weapons. Nuclear weapons have only made the security environment more fragile." Adds Zia Mian, a physicist and specialist on the Pakistani nuclear programme: "As arsenals and delivery systems grow, there will be more bombs and more people in more places that require control—and more opportunities for things to go wrong."

But Stephen Cohen, of the Brookings Institution, says nuclear weapons have now made a major war in South Asia impossible. "But this hasn't made lasting peace more likely," he argues. "Perhaps the most important consequence is that nuclear proliferation and Kashmir have all become linked in the minds of outsiders. India will continue to be subjected to pressure—as will Pakistan—to settle up."

There is also the problem of competing nuclear postures. Says Admiral (retd) Raja Menon: "Our doctrine is retaliation would be so massive that no one can attack us and survive. Pakistan's doctrine is if they are pushed to the wall, they will not hesitate to launch a first strike. Pakistan's nuclear arsenal appears to be such that it will deter serious conventional war, while our arsenal is meant purely to deter nuclear war. There is obviously a strategic gap—and hence the fear of nuclear instability in South Asia."

Pakistan aside, has India's nuclear muscle frightened China (cited as the main reason for Pokhran II)? The answer is ambiguous—and many think it is for India's good. Says a western diplomat: "If your beef with China is modest to begin with, then the modest arsenal is enough." His implication is that since India and China don't have pressing and complex disagreements, any meaningful nuclear flexing can take place only in the future.

Currently, India's nuclearisation hasn't forced China to dramatically rethink its strategic planning. This is largely because the existing missiles in India's nuclear quiver—Agni I (800 km) and Agni II (2,200 km)—can't reach most of its strategic and economic assets. But, government sources say, once Agni III (range 3,500 km) is rolled out by the end of 2003, most cities in China will become vulnerable. This, consequently, should elicit a grudging acknowledgement from Beijing.

Happily enough, Pokhran II has blown a big hole in the discriminatory NPT regime. Senior diplomatic sources say there's a growing recognition that India, Pakistan and Israel have to be accommodated in the international nuclear regime. Another major turnaround has been on Washington's belief (but for a handful of NPT evangelists) that India's nuclear acquisition could pose a threat to the US and its interests. Diplomats say as long as India doesn't develop missiles beyond the 5,000-km range, Washington can live with Delhi's nuke dreams. As a diplomat points out: "India has a conservative view about nuclear weapons. It has them but doesn't flaunt them, doesn't export them."

Ultimately, critics of India's nuclear acquisition will have to accept it has effectively ruled out a full-scale conventional war in the subcontinent. There could be skirmishes and threats but the chances of these blowing up have been curtailed. Kargil and India's 10-month mobilisation on the border suggest as much.

Life & Times Of A Treedom Fighter