Virgin In The Woods 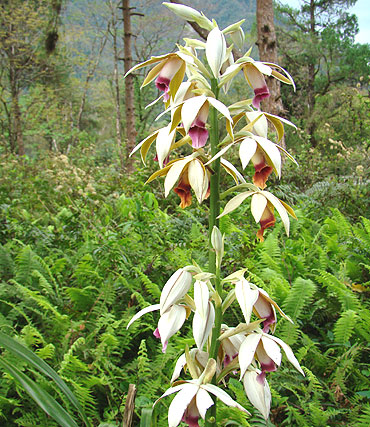 Virgin In The Woods

There's something about the orchid that calls to mind a femme fatale. It's got an arsenal of seductive wiles, swathing itself in musky scents or disguising itself as a bee in heat. Its beauty takes a thousand different strange and beautiful forms—from sinuous fronds cascading from branches to jewel-like insects nestled on the forest floor. Like femme fatales, they also drive men wild. Right from the Victorian heyday of 'Orchidelirium', when plant hunters scoured India's forests for exotic additions to gardens back in England, to the present day when they do so for pure profit, orchid-hunters have brazened through lethal misadventures involving militancy, tigers and malaria in search of these elusive blooms.

India is home to 1,450 species of wild orchids, but today the most spectacular of them are on the brink of extinction, ravaged by inexorable forces of development and commercial over-exploitation that feeds this Rs 541 billion industry and its flourishing black market. 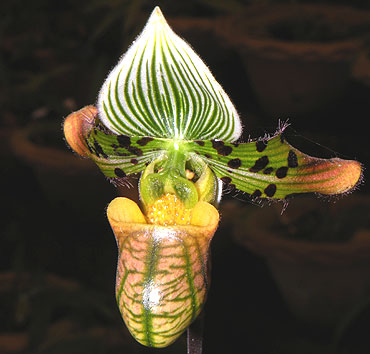 The most spectacular of these orchids are also the most endangered. Take the endangered Lost Lady's Slipper (Paphiopedilum fairrieanum), for instance, which also goes by the appellation Thousand Pound orchid. According to orchidology lore, it was a soldier in the British Indian army who first spied its purple-streaked hood—reminiscent of a Dutch milkmaid's cap—while on a foray in Arunachal in the late 19th century. A £1,000 reward was offered to anyone who managed to track it down by Sander's orchid nursery, in England. 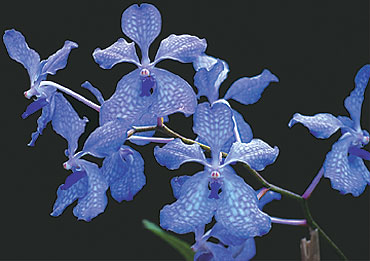 The Red and the Blue Vanda are two other rare orchids that are close to extinct in their natural habitat, from where they have been uprooted by those intent on commercially cultivating and exporting them. You can often see their hothouse-reared descendants in private gardens in the Northeast. Only a few, very intrepid Indian orchidologists have been rewarded with a single, tantalising glimpse of the Snow orchid (Diplomeris hirsuta) after a tough three-day trek in the Eastern Himalayas.

The tantalising first glimpse that hooked orchidologist Sadanand N. Hegde was of the purple foxtail-shaped Rhynchostylis retusa, also known as the 'Sithale'. "I'm born and brought up in the Western Ghat forest area, where I became fascinated by this orchid species, which lady Sita was believed to have twisted into her hair during her exile. It's also mentioned as a medical cure in the Charaka Samhita, the ancient Ayurvedic text."

Ancient pharmacologists' belief that every orchid was a medicine chest unto itself is also behind the etymology of its name, which is derived from 'orchis', Greek for testicle. Adds Dr Hegde, "In Europe, 600 years ago, any plant resembling a human organ was considered useful in treating that organ. They found the orchid testicular-like in appearance, and hence thought it would be useful to enhance virility." That explains why they were a favourite snackfood for the libidinous satyrs of Greek mythology. 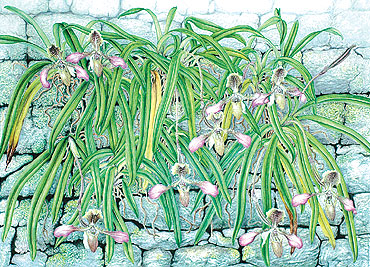 While some of India's orchid species are found in the Deccan plateau, Northeast India is where 900 of its rarest, most exquisite forms are found. Orchidologist K. Haridasan explains that the reason for the enormous profusion and variety of orchids in the Northeast is the wide range of agro-climatic conditions here, the heavy humidity and rainfall, and the transmigration of neighbouring Sino-Burmese species, which also find the Northeast an ideal habitat.

Commercial exploitation is only one of the threats to wild orchids. "Forest clearance for road-building and hydel projects, indiscriminate tree-felling for jhum (shifting) cultivation, calamities like flash floods and landslides, all of these contribute to orchid destruction," says A.N. Rao, of the State Forest Research Institute in Itanagar. "But habitat destruction is the main cause."

Orchids are also sensitive to small variations in humidity, temperature and rainfall. The littlest changes in the forest ecosystem make them dwindle and disappear. This delicate existence is rendered more precarious by the fact of their being difficult to propagate naturally. Many orchids are so shaped that they are accessible to just one kind of insect, and though each orchid pod bears a million seeds, few, if any, germinate because they require the presence of specific 'mychorrizal fungi' to provide them nourishment. That's why, as Dr Rao puts it, orchids are "indicators of primary, virgin, undisturbed forests".

Hemlata Pradhan, a Kalimpong-based botanical artist and third-generation orchid obsessive, laments that there are hardly any such 'virgin' forests left. "All over the Northeast, forests have been cleared for building houses, growing food crops, building roads and dams. It's been heart-rending to see many orchid habitats irreversibly damaged by the Teesta Dam project in North Bengal, so close to the Mahananda Wildlife Sanctuary. Thousands of orchids, including the Snow Orchid and the Venus Lady's Slipper (Paphiopedilum venustum), were eliminated without a single thought."

Dr Haridasan, however, sees hope, thanks to conservation efforts like the Sessa Orchid Sanctuary in Arunachal's West Kameng district. "Such protected areas enable in situ conservation," he says, "but it's also important to have awareness camps for local people. People in the Northeast love orchids, and have ritual uses for them—if we don't exploit these cultural linkages and involve locals in conservation efforts, orchids will very shortly become extinct."