Fable, folklore and movies have all drawn on twins. In Kodinji, they are an abundant mystery. 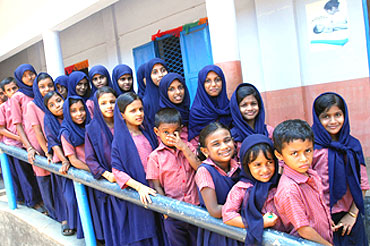 Kerala's birth rate may have plateaued, but in a small village in the state's north, the unusually high rate of twin births has scientists, doctors and, indeed, the whole state intrigued. In Kodinji village, in Malappuram district, there are more than 220 pairs of twins. For a village of no more than 2,000 households (about 14,600 people), this is certainly qualifies as a standout population statistic.

At first sight, nothing seems unusual about this village, about 150 km from Kochi. It is palm-fringed, crisscrossed by streams, patched with rice paddies—like so many other villages of Kerala. But walk down its narrow roads, especially when children are on the way to or from school, and multiple sets of identical faces will bob past you. And then there are many more twins who aren't identical. In fact, the village has more of fraternal twins, ones born from two different ova, than identical ones, who are born from the same ovum. 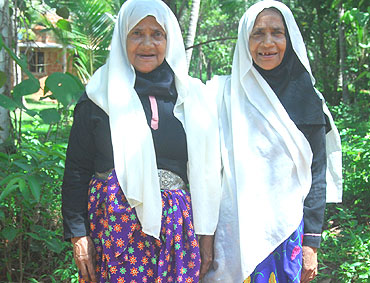 Kodinji's twins were relatively unknown till about 2001, when the Government Mappila Upper Primary School opened and the early rolls were found to have more than a dozen twins with similar sounding names like Sahla-Suhaila, Tazna-Fazna and Lubana-Lubama. At present, the school has at least a dozen pairs of twins and even a set of triplets attending the morning and afternoon sessions. The other schools here, too, have a high number of twins.

"The national average is 8.1 twins per 1,000 live births. But here, I would say it's a minimum of 45 per 1,000 live births," says Dr K. Sribiju, who is a dermatologist but, being here, has also taken to collating and analysing data on twins. "We are yet to conduct a door-to-door survey. I'm sure there are more than 250 pairs of twins, ranging in age from just a few weeks to 85-plus years."

Experts who probed a similar phenomenon in a tribe in Nigeria zeroed in on high levels of follicle-stimulating hormone (FSH) in the tribeswomen as an explanation for the high occurrence of twins. But medical and other experts are yet to investigate Kodinji's explosion of twins.

Here's a sampling of facts about the twins of Kodinji. In 2008, there were 15 pairs of twins born out of some 300 healthy deliveries. Sixty twins were born in the last five years. "What is fascinating is the increase in the numbers of twins with each passing year. In the past ten years, the number of twins in Kodinji has doubled," says Dr Sribiju. Twin sisters Kunhipathutty and Pathummakutty, 65, agree that earlier there were far fewer twins in the village. Data collected by the newly formed Twins & Kin Association (TAKA) in Kodinji, which has 600 members, including 204 twins and their parents, confirms the sharply rising rate of twin births. Whereas in the 41-60 years age-group there are only nine sets of twins, in the 5-15 years age-group there are 81 pairs. 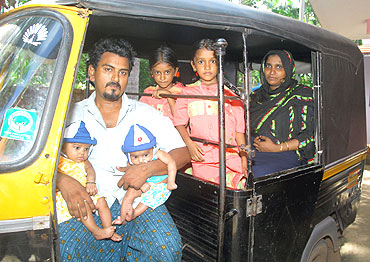 Tough life: Yousuf with his family

Most of the twins belong to poor families, and this puts a heavy burden on their parents. Land-holdings have fragmented over the years, leaving no more than 10 to 20 cents to each family. Most of the men are daily wage-earners. Bushara Mohammed Kutty, 30, who lives near the Government Mappila School, has a set of fraternal nine-year-old triplets—Jasna, Fasna and Husna. Her uncle has twin sons. "The more the merrier—provided you have the wherewithal," she says. "But I hope some Good Samaritan will help us out. My husband is the sole breadwinner. He's away in Mumbai, engaged in a small business. I can't make both ends meet".

Yousuf, an autorickshaw driver, and his wife Asya have two sets of twins among their six children. "The first and the second were single births, and then there were two pairs of twins in succession," he says. The youngest twins are three months old. "I can't afford a loss of even one day's work if I have to feed them all. Will this story about us help us in any way?" he asks.

But Kodinji's twins are also a source of fun, games and confusion. A recent incident involved TAKA president P. Bhaskaran's identical twin boys, Anu and Abhi. During the school board examination, an invigilator, who wasn't from the area, accused Anu of moving from one hall to another to write his exam, when in fact it was Abhi sitting in the second hall. Bhaskaran also recalls how his twins enjoyed fooling emigration staff at airports by exchanging their passports—but that was before the days of biometric ID proof.

What makes the twinning in Kodinji even more curious is that it is not community-specific. Because the majority of the village population is Muslim, there are more Muslim twins, but Hindu families here too have an unusually high number of twins. Locals also make a strange claim—that couples from other places who have moved to the village after marriage have also produced twins.

Could it be something peculiar to the local diet? Locals insist there's nothing unique or distinctive about what they eat and drink. Dr Sribiju also rules out some unknown pollutant in the area as the trigger, for most of the twins are born normal and healthy. But he says it could be some other factor in the environment, that yet remains to be identified. It will take the combined efforts of geneticists, doctors, environmental scientists and anthropologists to uncover the mystery. Meanwhile, this quiet little village is basking in media attention it has received from across the world, bringing it widespread fame.