Home  »  Magazine  »  National  » Interviews  » EXCLUSIVE interview »  ‘Venkatachaliah Bill Was Perfect. Why Did The BJP Depart From It?’

‘Venkatachaliah Bill Was Perfect. Why Did The BJP Depart From It?’

The eminent jurist may be 86 now but has picked up his fighting gloves again, this time to save the independence of the judiciary 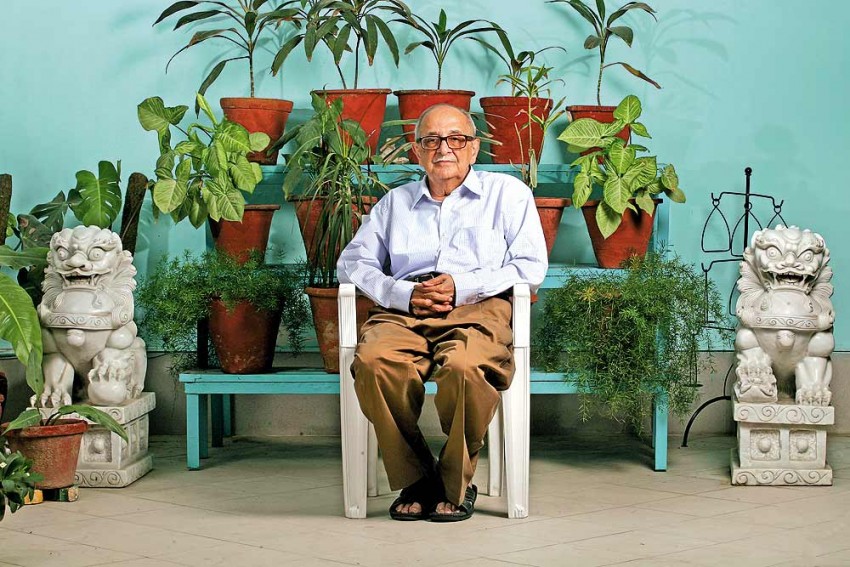 Sanjay Rawat
Anuradha Raman September 08, 2014 00:00 IST ‘Venkatachaliah Bill Was Perfect. Why Did The BJP Depart From It?’ 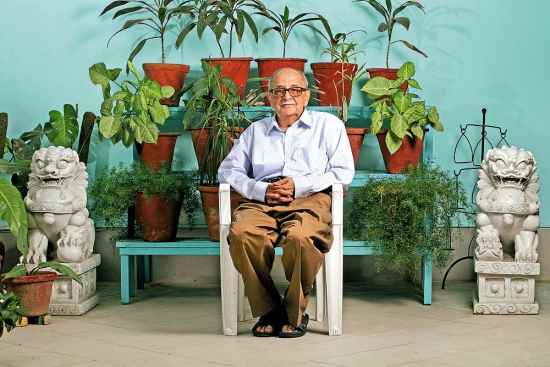 Fali Sam Nariman needs no introduction. The eminent jurist may be 86 now but has lost none of his fervour and cou­rage of conviction. He has picked up his fighting gloves again, this time to save the independence of the judiciary, which he thinks stands imperilled with the passage of the National Judicial Appointments Com­mission Bill and the Constitutional Ame­ndment Bill. Tabled on August 11, the bills were passed in Parliament in just three days, seeking to replace the collegium system with a six-member body to appoint judges to the Supreme Court and the high courts. Nariman, and four others, moved petitions questioning this move to alter the Constitution which the court dubbed as premature. Nariman doesn’t think so. “Why doesn’t the BJP bring the very same bill it drafted in 2002? What are the reasons for not bringing that good bill again,” he asks, in an interview to Anuradha Raman:

The judges say your PIL is premature. Is it? Is it a setback?

I don’t think so. Premature only means you haven’t come at the right time and you come after the President gives his assent to the Constitution Amendment Bill. But you see, we lawyers, at least some of us, are passionate about the independence of the judiciary. My own view was that a petition for an interpretation of Article 368 had come up for the first time; it had never been interpreted before formally. An amendment of the Constitution was considered to be law. But after the famous Golakhnath case (in 1967, an 11-judge bench ruled that Par­liament could not curtail any of the fundamental rights) was overruled by a 13-judge bench (in the Kesavananda Bharati case, 1973, where it was held that Parliament could amend the Consti­tution, but without altering its “basic structure”), the question was what is that animal called ‘amendment of the Constitution’ if it is not law. Because if it is not law, can you not challenge it at any stage? Even after the passing of the bill by both Houses of Parliament? Now the judges took this view, and judges cannot be passionate. They have to be judicious, so they took the more judicious view since it hasn’t been decided before that it would be better to stick to the old rule which applied to law and say that at this stage you are not permitted to come. They may well have been right, but the far more important question is this question about the independence of the judiciary because that is very significant.

Are you in favour of a National Judicial Commission?

I am fervently supportive of there being a bill that talks about the National Judicial Commission, but not a commission where the power to appoint judges is with non-judges. And this question will have to be ultimately decided much later after the President assents to the bill. The BJP government—when it was in power in 1998-2003—had itself appointed a commission to review the Constitution, and one of the questions which was being reviewed by Justice M.N. Ven­kata­chaliah, who was chairman of the commission, was whether this present system of appointment of judges by a collegium ought to be changed. And they came to the view that it ought to be changed. And they actually devised a bill, the format was given and that format pro­vided for a National Judicial Com­mission consisting of three seniormost judges, the chief justice and two others, the law minister and one eminent person from amongst members of the public to be appointed by the President in consultation with the Chief Justice of India. Not the minister. That is to say, no political slant. In support of that view, the BJP government itself introduced the 98th Constitution Amendment Bill in Par­liament in 2003, and that is the ideal bill. It only lapsed because elections were called. My point was that there is no explanation in the proceedings in Parliament or anywhere else by the law minister or any other minister as to why they departed from this bill. It was a perfectly correct bill.

But what transpired when Union law minister Ravi Shankar Prasad had called a group of people?

He called 12 of us on July 27 and sought our views. I gave him our view. But that was before this bill. And he never mentioned that there was a bill in the offing. The bill came only on August 8.

Are you saying the law minister wasn’t aware?

He may not have been aware. I am not saying he suppressed anything. He probably wasn’t aware of it at all and some forces greater than him ultimately induced the law ministry to get this bill on. That’s why the speed and haste. He said they had been discussing this for the last 25 years. He is right. But there was not only a discussion for 25 years, there was actually a format given to them by Justice Venkatachaliah which they had accepted then.

What precisely do you mean by forces beyond him?

I don’t know. But I have no doubt, Prasad never suppressed anything. He is an honourable person and a good man. He didn’t want to fox us or trap us or anything. He didn’t mention this. The provisions were not mentioned. Because that came on August 8. The meeting was on July 27. We all said we were supportive of a National Judicial Commission Bill but with a weightage for the judiciary or the judges. Because we have seen the problem with political appointments when another majority government was in power. All the changes came in a day. The bill was introduced on August 11 and passed on August 14.

And you are worried as there is ano­ther majority government now?

Are the judiciary and the executive on a collision course? 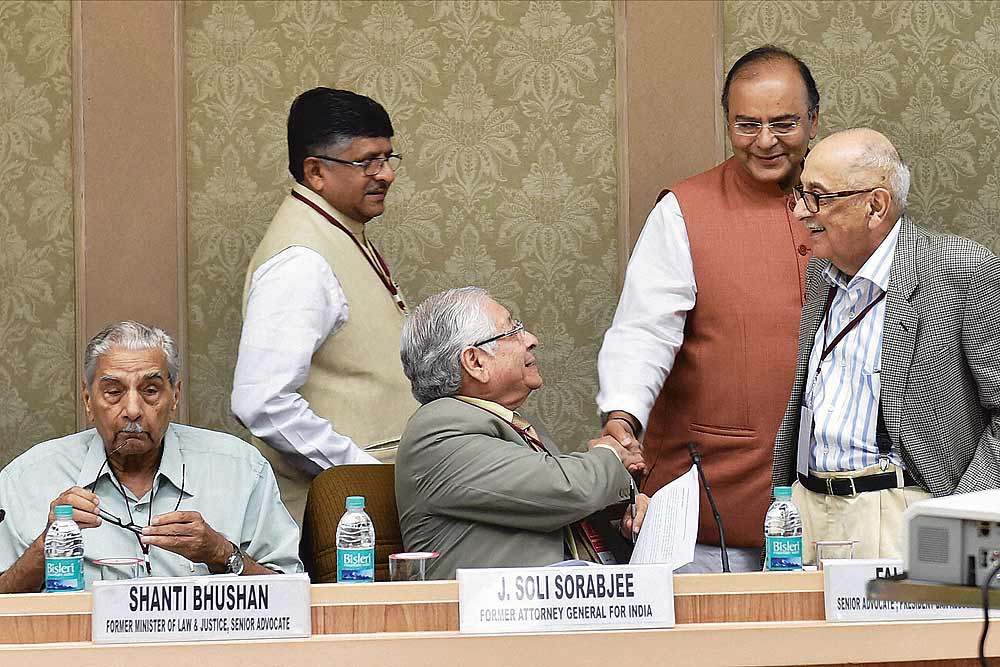 You won the (1993) Second Judges case where power was restored to the judiciary to appoint their own. Yet in your book, Before Memory Fades, you write it was a case you’d prefer to have lost. Yet here you are again fighting for the judiciary’s independence....

The situation has changed because the collegium system did not work as we expected. There were deficiencies in the judiciary also. If the collegium had maintained minutes, if all five judges had recorded everything and it was done in a transparent manner, it would have been perfectly alright. But the collegium was like a curtain drawn on the proceedings with an exchange of your man, my man. In the current bill that’s passed, if any two out of six dissent, which means if all three judges say appoint Mr X, two men—the law minister and an eminent man—say no, it means no. So control of the judiciary is no longer with the judiciary. Appointment of the judges is no longer with the judges. Which for India is a bad thing. In England, it was perfectly okay. They have a different ethos.

Much of the debate on the judiciary has also been sparked off by Press Council chairman and ex-Supreme Court judge Markandeya Katju’s criticism and his series of exposes on corruption in the judiciary. Has all his criticism served a purpose?

I don’t think so. I had said it was cheap publicity. He wrote me a letter—he’s a good friend—saying you should apo­lo­gise. I didn’t. I don’t intend to. I still think it is publicity. Cheap or not, I don’t know.

But it’s a view that has found takers.

I follow. Take your pick. If it comes to trusting judges to appoint judges—it sounds odd, I agree, but trusting politicals to appoint judges? I would trust judges. That’s the stark choice. There is no other choice. If judges were appointed by god or some super human being I would possibly prefer it. But there is no other super human being. There has to be some involvement of the public also. That’s what Venkatachaliah’s bill says. I would put the Venkatachaliah way as the correct way which found favour with the BJP. Which is what is worrying me. They introduced it too. Now suddenly, without an explanation, they have changed. I don’t know why, except to control.

But at that time they were not in a majority?

Why have things come to a pass where the legislature is wary of the judiciary as is the executive. The legislature seemed to be united in pushing this bill through?

Not just pushing it through. It will be immediately ratified. Because whenever the Congress is there, it will be ratified. This is what worries me, that this is not a fight between the Congress and the BJP, they have both ganged up.

Do you think the political class has ganged up against the judiciary?

Has no good come out of Katju’s criticism? After all, you too accept there are bad pennies?

We have said that a long time ago. I was the one to have said we should change the system. But we can’t swing like a pendulum. Of course, you have to change it. I am not for the collegium system.

Yet, you once praised Katju...

Not for his view on the collegium system. But on his writing on Modi. I said he is entitled to his view, I respect him for that.

Are you saying someone you don’t know has introduced provisions to curtail the powers of the judiciary?

I am asking why isn’t the BJP introducing the Venkatachaliah bill? It was a very important thing. The Venkatachaliah Commission was appointed by L.K. Advani—at that time, he was the ruling force. Poor chap, today he is out. But that is not the point. We will fight it when it comes. There were two SC judges, both former chief justices—Justice V.N. Khare and Justice A.M. Ahmadi. Justice R.C. Lahoti was invited but couldn’t come. We were part of this confabulation on July 27. They also endorsed the position that they supported the ‘Bill’—bill in inverted commas because there was no bill then. There was no draft. It was just a discussion and the draft was the previous draft they had. They only said here are the drafts which included the Sibal draft. We said we were in agreement with a National Judicial Commission so long as the judges had the last word.

Some present said we should go back to the old system where the government only makes appointments. So there you are, there is a wide disparity of views.

The attorney general (Mukul Rohatgi). These are the anomalies. Governments change, attitudes of governments cha­nge. Courts today are more interfering. Now they are saying how is it (that things worked fine) before the 1980s (when) judges were appointed (by the government)? The answer is that for 30 long years whosoever the cji recommen­ded was appointed. The government said it was not our preserve. That was their attitude except when they found something wrong against a judge. The consultation by practice meant concurrence.

Do you think the bill has also come about because the judiciary has become pro-active?

There is a lot of judicial activism which is resented in many quarters that judges are stepping out of their crease. That’s happening all over the world.

Is that a good thing or a bad thing?