A Muslim school runs aground in a spat with the orthodoxy 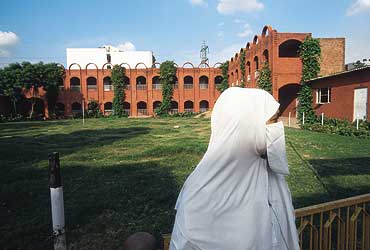 "The Jamaat is trying to make this out to be a property dispute," says a distraught Iqbal, "when the fight is actually about the Jamaat, one of our major Muslim religious organisations, not being able to stomach a woman efficiently running a school on modern lines. They would rather have madrassas. They have destroyed a flourishing school. Using the mullah network's might, they've spread lies and spiteful rumours about me, resorted to hooliganism to see me cave in. They're breaking constitutional, even religious laws." Allegations that Shafi Moonis, vice-president of Jamaat-e-Islami, dismisses as hysteria: "Iqbal's intentions are dishonest, she wants to grab our land, but the courts will see us through." He is also not frazzled by the fact that the Deoband's Dar-ul-Uloom, one of the highest schools of Islamic jurisprudence in India, has issued a fatwa against him in the matter.

Built in 1989 by Iqbal on land belonging to the Ishaat-e-Islam Trust, a Jamaat-e-Islami body, The Scholar has been managed by her since then. But when the five-year land lease expired in '95, the Jamaat agreed to a new contract only if the school, on paper, was handed over to it. Iqbal, however, was to continue running the school for five more years along with a newly constituted panel. But fearing Jamaat interference, Iqbal went to court over the matter in '99, and got a stay in her favour for two years. This was vacated by a Delhi High Court order on February 15 this year; but with a qualification that the Jamaat should not dispossess Iqbal, and must observe due process of the law.