Anil Sharma’s film reminds you of many others—Sholay, Lagaan, Dharam-Veer, Braveheart, Gladiator, Troy, Conan the Barbarian, to name a few. But... 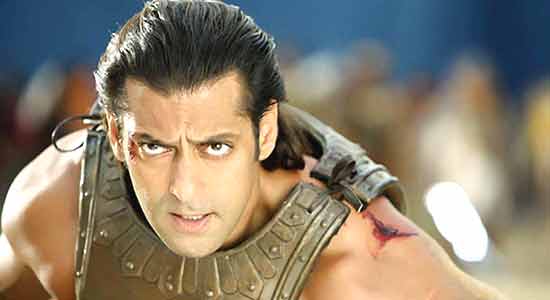 Set in the late 19th century, Veer is the story of a group of Pindhari warriors taking on the Rajput king of Madhavgarh (Jackie) who had betrayed them to the British. To complicate matters, we have the Pindhari boy Veer (Salman) falling in love with the king’s daughter Yashodhara (Zarine). It ends with the Rajputs realising the foolhardiness of fighting with each other and taking on the real enemy, the Brits.

Anil Sharma’s film reminds you of many others—Sholay, Lagaan, Dharam-Veer, Braveheart, Gladiator, Troy, Conan the Barbarian, to name a few. On top of this, he deliberately makes his frames titanic in proportion. Every other shot is a sprawling piece of landscape—be it the vast desert, panoramic village or the expansive British countryside —filled with way too many people or way too many horses. The chubby Katrina look-alike, Zarine, has little to do other than smile and fold her hands in a placatory namaste, Sohail is asinine, Jackie deadpan and Mithun his usual self.

However, Salman, besides getting credited for the story and screenplay, gets to do a bit too much —the kind of stuff no Superman would have done before. He rides two horses simultaneously, dodges bullets atop a moving train, stops a moving horse cart with just his left hand, breaks the edge of the sword by merely holding it, pulls off the artificial hand of the enemy during a vigorous handshake, shows affection for his dad by wrestling and trying to dunk him into a pool, twists around the head of a WWF-type warrior and fights a bloody battle despite a bullet lodged firmly in his chest. He wears a permanent scowl and barks dazzling lines like: “Jahan se pakdoonga paanch ser gosht nikaloonga”. Very helpfully, a lion roars in the background to make this anger sound more edgy. Salman also chases a girl, plays the piano for her, and dances (once with a broken leg). He does some politically correct things like making a speech against sacrificing goats, reminds the audience how the Taj Mahal is leagues ahead of Buckingham Palace and quotes Lord Bernard Shaw on how clothes don’t make a man. And then, as if to prove himself, he also takes his shirt off, a number of times.