Forget Kipling, the East and West twain may deliver the ultimate management mantra 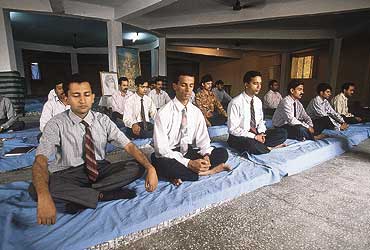 outlookindia.com
-0001-11-30T00:00:00+0553
We believe India can be known for management education, just as we are now known for software. This might take even a decade but we have made a beginning and are moving step by step," says Dr M. Rammohan Rao, director, IIM-b.

Indeed. The buzz in India’s best B-schools right now: "Think Global". Almost every iim is working on turning itself into a global brand, not just an Indian one. Interestingly, much of this is also built around Indian values that can inform management theory. Of late, there’s been an explosion in research adapting basically western management thought to Indian value systems and developing better, more effective theories based on traditional Indian texts and ethical structures. Prof S.K. Chakrabarty of iim-c is the pioneer here and iim-c’s Centre for Human Values the first to focus on management and the Indian ethos. Others have joined in, from Amity Business School, which starts every new course with a havan, to Mumbai’s S.P. Jain Institute, which conducts a three-day workshop on the Gita, involving discourses, meditation and prayer, every year at an ashram near Vadodara.

IIM-l, for instance, is going global with an emphasis on Indian leadership values. Prof Debasish Chatterjee, the face and spirit behind iim-l’s Leadership Centre, has been around the world spreading the concept of leadership according to the Indian value system. He was recently called by Harvard Business School as one of 15 Thought Leaders from across the world. Subsequently, he spent the last year on sabbatical, teaching three leadership courses at Harvard. "People abroad look upon India as a country rich in values and ideas, a country that gave to the world several meaningful leaders," says Dr Pritam Singh, iim-l director.

Rao wants to make iim-b the best B-school in the Asia-Pacific region. "This means not only knowledge dissemination but knowledge creation through a wide range of activities—programmes, consultancy and research," he says. Beginning this year, iim-b will market its PG programme in the Asia-Pacific. "We want to draw more foreign students than there are now for the full-time programme and not just via exchange programmes. We’ll soon go to Europe too to draw students. We have a committee looking at web-based education," says Rao.

Among other initiatives, iim-b plans to attract mid-career civil servants from the Asia-Pacific region for its post-graduate programme in public policy at the Centre for Public Policy established recently. iim-b plans to organise executive education programmes in West Asia and a post-graduate programme at a later date. "We are exploring the possibility of opening a campus in this region," he said. The impm or International Masters programme in Practicing Management, begun in March 1996, is another effort to project a global brand. Offered as a learning experience for execs, it is a cooperative venture of business schools in five nations—Canada, the UK, France, Japan and India.

Meanwhile, iim-c, which has a faculty exchange programme with four US universities and one each in Singapore and Bangkok, has initiated 15-day Management Development Programmes in Dubai, Singapore and London. International Advanced Management Programmes are being launched in Dubai, Kuala Lumpur, Dhaka, London. "Unlike many other schools in India which facilitate the entry of foreign institutions In India," says a student representative, "we intend to establish iim-c as a brand in neighbouring countries first and then take it further."

But what’s striking is the growth of a new style of management education steeped in Indian values. Says A.K. Sengupta, director, S.P. Jain Institute: "We’re proud of our East-West combine. Whatever we do is based on two paradigms: value-based growth and intensive practice." Perhaps due to the bad press management education sometimes gets for its over-emphasis on materialism, one also sees a trend towards inculcating social responsibility in students. Instead of the usual summer training with a corporate in one of its business functions, S.P. Jain students do a six-week summer project with an ngo or the social initiative of a corporate. This is called the Development Of Corporate Citizenship Programme. This is followed by an eight-week autumn project which is the usual technical training with a corporate. Indeed, Sengupta feels it is the feeling of social responsibility in his students that makes them liked a lot by recruiters.

Similarly, iim-c has inca, the Initiative for Community Action, run by students with faculty members guiding them for "service to those who serve others". It offers free management consultancy to voluntary organisations and others doing useful social work. The projects cover a wide range. Students get no credit for their projects, nor are inca projects part of academic requirements. But, says an iim-c spokesman: "All those who have participated in these projects have reported the satisfaction of a learning experience not available elsewhere." This is not surprising.

Are we then looking at a future where Indian institutes compete with the best western schools, but on their own terms, terms defined by the ethos of India, and a philosophy that combines the spiritual with the materialistic, in the unique Indian way? It’s tempting to think of it so. What one does know, though, is that the seeds are being sown in campuses nationwide. More power to them.

The Blue Label: II'm A Winner