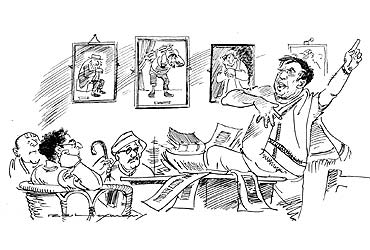 While profits can't compare with royalties from abroad, each of Narayan's self-published books sell a whopping 5,000 to 20,000 copies a year. Sales of The Guide have crossed 20,000 this year, thanks to it being prescribed as a textbook by several universities. And Swami and Friends has a print run of 10-15,000 a year. "So far the imprint has been going on under its own momentum, but now we want to do more in order to attract another segment of readership," says Bhuvaneswari. Last year, for example, the self-imprint published a sumptuous coffee-tabler of Narayan's autobiography, My Days, with illustrations by his brother R.K. Laxman and an introduction by Alexander McCall Smith, priced at an unusually high Rs 500. And this year Bhuvaneswari is working on a new edition of Malgudi Days with an introduction by Jhumpa Lahiri. The USP of the self-imprint is the rock-bottom pricing—rarely crossing Rs 100—and she doesn't want to meddle too much with that, though she is willing to invest more in publicity and design. "We want to modernise the get-up, but it has to be in keeping with his subject matter."

If it wasn't for the War, Narayan may never have discovered the shrewd businessman lurking inside the struggling, impractical writer. Narayan was convinced from the start that he could make his living as a writer, but had only the fuzziest notion of how to go about it. "When my novel is finished, it will bring in income all my life and fifty years after," he told his future father-in-law while asking for his daughter's hand. His father-in-law was less than optimistic. After listening with apparent interest and without contradicting Narayan, he responded: "I'm sure if your father used his influence, he could fix you in a government job."