Theology and politics? Questions of self-definition roil Lingayat country ahead of polls. 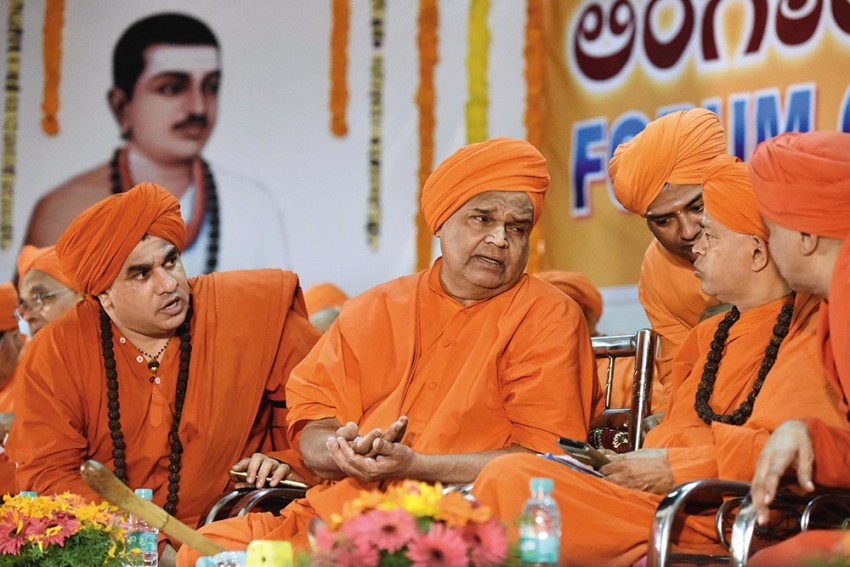 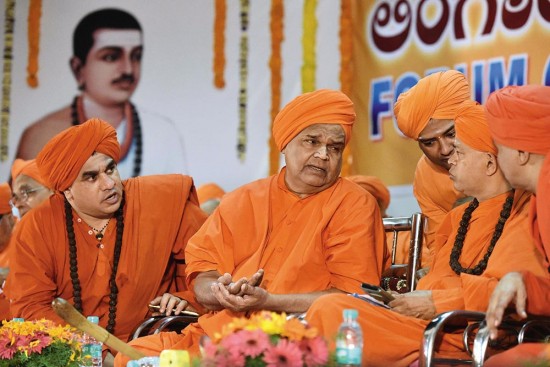 In a corner of the bustling street leading to the Moorusavira Matha in Hubli, the familiar rhythm of rotis being pounded into shape wafts up from a tiny shop next to a Lingayat khanavali. It is not far from where BJP president Amit Shah’s election road show is passing by, with saffron flags, drums and slogans. Here, you get both the brittle and soft rotis that are the vital underpinnings of the meal served with sabzi, curd and she­nga (groundnut) chutney in these khanavalis or canteens across the wide swathe of northern Karnataka where the Lingayat community is spread out. In sharp contrast to this common menu, there’s an unfamiliar ingredient that’s been tossed into the election spread in these parts.

Manjunath brings his dilemma into perspective, while managing the store-front with a toddler in tow while two women in an inner room beat out the rotis. From his customers, he hears both sides of the debate. Some insist that if the Lingayat faith gets recognised as a min­ority religion, it would help with their children’s education. Others argue that it is wrong to break up the community into Lingayats and Veerashaivas.

In the build-up to Basava Jayanthi this week, the political waters have only got muddier. Karnataka goes to polls on May 12, but there’s no clear indication how the Lingayat voter will respond. It isn’t merely tearing open the rift bet­ween reli­gious seers that is making it difficult. Some are publicly endorsing the ruling Congress that had recommended the minority religion status, and stepping up pressure on the BJP government at the Centre. Earlier this month, BJP national president Amit Shah’s comment that the Centre would not act on the Karnataka proposal brought nearly 40 Lingayat seers tog­ether in Bangalore for a press meet to make their stand clear. The min­ority religion demand will be taken to its logical conclusion, they said. In the middle of a poll, that’s a bit of a wild card.

“This (discussion) is only at an intellectual level. For the common man, it’s a non-issue,” insists BJP legislator Arvind Bellad whose seat covers much of Dhar­wad, Karnataka’s cultural capital upstate that is home to writers and, equally, Hindustani music. “Till five years ago, I did not know the difference and I’m a Lingayat. My children don’t know what the issue is about.” It’s a fair enough obs­ervation you will commonly hear at many places. But it’s also true that the Veerashaiva-Lingayat debate has been a vocal one, getting prime time on televis­ion debates and, further, by way of books and pamphlets often disseminated by the influential mathas.

Then, you hear about activist groups in Belgaum, Bijapur and Bidar rallying to create public opinion. “It’s good that it has come out now. People will know what the facts are,” says Sangamesh Saunda­ttimath, 75, a professor of vach­ana literature who taught at the Karna­taka University in Dharwad. Over the past year, his writings arguing against creating a wedge between Veerashaivas and Lingayats were published by the Ram­bhapuri Matha, one of the five pancha peethas (religious centres) which are now pitted against a large number of Lingayat mathas.

The terms Veerashaiva and Lingayat, the Rambhapuri seer wrote in his preface to the book, were as synonymous as Bharat and India. “Actually, this has for long been debated at a limited high level, among scholars,” says Dr Saundattimath. “Now, because of the elections, some people think they are breaking our dha­rma and that we should teach them a lesson. So, there might be a bit of an imp­act (in the polls),” he tells Outlook.

“If we abandon this movement now, we may not get such an opportunity again,” says a matha seer.

It’s a complicated issue for many reasons. At one level, it appears as an assertion by a large section of Lingayat mathas that run hundreds of schools and colleges across Karnataka which would benefit from the minority religion recognition. It’s also a protest against the pancha peethas that have traditionally claimed an upper hand in the community though they are fewer in number. The main grouse against them is that they do not recognise Basavanna as the founder of the Lingayat religion but instead claim that Veerashaivas existed before the 12th-century social reformer. Alongside this, differences crop up between the two groups of religious gurus—both in terms of worship and protocol.

So even when seers gather, some point out, the pancha peetha swamijis are seated in an elevated position compared to others. This and some of their rituals highlight the social rigidity that Basava­nna rebelled against, claim the Lingayat seers. “They were rajgurus, so they were given a throne and crown. The kings went but the tradition continued. That’s all,” counters Dr Saundattimath. Now, as a fallout of this conflict, several religious gurus have supported a new association, Jagathika Lingayat Maha­sabha, which riv­als the All India Veera­shaiva Maha­sabha that used to be the main representative body of the community and is mostly led by political leaders.

Tontadarya matha seer Siddalinga Swami says they have no problem whoever comes to power. “But if we abandon this movement now, we may not get such an opportunity again in our lifetimes,” he told a recent press conference in Bangalore. The Tontadarya matha is located in Gadag, an hour’s drive from Dharwad, where both groups held huge rallies over the past few months. “Why the Lingayat movement is a big headache for Amit Shah is because we are saying that Lingayats are not Hindus,” he says, as the activists in the audience periodically broke into slogans such as Bharata desha, Jai Basavesha. Indeed, many of those who protest any attempt to break the community into Veerashaivas and Lingayats will still concede that the Lingayat faith propagated by Basavanna is an independent religion.

While the BJP is treading carefully on this issue, Shah has been visiting several important mathas across the state. It’s a common poll-time practice for politicians because of the regard local people have for the seers, but it has become especially relevant given the current mood. “What the BJP did, when we saw Siddaramaiah’s move to cut into Lingayat-Veerashaiva was to just wait for people to realise what was going on,” says Bellad. “So, in the process (chief minister) Siddaramaiah and his way of doing politics got exposed.” Counters a senior Congress leader: “Some feel there will be good impact, some say there will be no impact. But if there was anger or wrath, we would have already experienced it by now.”

In any Karnataka election, the Lingayat factor matters. It’s something the Congress learnt at great cost in the early 1990s when it alienated itself from the community by the offhand sacking of Veerendra Patil as CM. The Congress has never been able to reclaim its support which went to the Janata Dal. When the Dal split, the votes got eventually transferred to the BJP. Since 2008, when the Lingayats firmly backed B.S. Yediyu­rappa, again over a perceived unfair treatment to him, the community’s vote has been fairly predictable.

The Lingayats are generally believed to constitute 17 per cent of Karnataka’s electorate. Ever since the minority religion controversy began, experts have further dissected that chunk to peg the Veerashaiva population at around three per cent of the community. “Now, if you assume that the Congress has no vote base in the entire community, whatever votes come their way will be a gain,” says one observer. Many BJP leaders too, he says, were wary of this issue cropping up before elections because it knew it was a potential spoiler. “There will definitely be an impact in north Karnataka and ‘Hyderabad-Karnataka’,” he says. Apart from Dalits and Muslims, this region also comprises a significant population of Kurubas, the community to which Siddaramaiah belongs.

A decade ago, the sympathy wave for Yediyurappa, combined with the might of the Reddy brothers, mining magnates from Bellary, helped the BJP sweep elections across the Lingayat heartland. Then, in 2013, the party’s voteshare splintered with a split in the party. This time, the party is back in one piece but then comes along the Lingayat issue.

Of course, there are other dynamics that come into play. The Veerashaiva-Lingayats have innumerable sub-castes; so competing candidates are often from the same caste. Besides, the mood also appears to differ. Says a Lingayat farmer from Yelburga in Koppal district: “This is an issue only for you folks in Bangalore and on television, possibly. I’m not bothered about all this. Elections or not, we’ve got to toil anyway.”

There’s an afternoon drizzle in Sirigere village and along the main road leading to the serene environs of the Taralabalu matha from where a breeze carries the chorus of schoolchildren reciting vacha­nas. The matha, off the highway connecting Davana­gere and Chitradurga in central Kar­nataka, is the seat of Shiva­murthy Shivacharya Maha­swamiji, one of the few Lingayat pontiffs who has kept away from public pronouncements on the issue. He’s a Sanskrit scholar who also wrote a computer programme to analyse Sanskrit grammar.

Inside the matha, the junior seer Panditaradhya Shivacharya Swami spells out their view. “Let the government give minority status or not. It doesn’t affect us. We believe the Lingayat faith is an independent one,” he says. The monastery, he says, runs 260 institutions with 40,000 students across the state but isn’t attracted by the benefits that the minority status will bring. “If they come, it’s welcome. But we will not ask anyone to recognise our faith as a minority religion just for that,” he tells Outlook. The issue, he says, isn’t likely to affect the polls in these parts.

The Davanagere region has a significant Veerashaiva population unlike the districts to the north of the Tungabhadra where the Lingayats dominate. And, as the locals point out, it’s about the only place where there haven’t been rallies over the issue. But, at the same time, the Murugha matha pontiff from neighbouring Chitradurga put things plainly enough at the seers’ press conference last week. “Sahakarakke sahakara (mut­ual cooperation)” was the phrase he used even while he told reporters that “there must be distance between religion and politics”. The agitation, he warned, will continue until the community gets minority status.

The election heat is only just starting to pick up in Karnataka, now that all the parties have finalised candidates. Will the Lingayat issue resonate loudly enough to swing the polls? And, if it does, which way will it swing? Ask most politicians and you’ll get a stock reply: ans­wers on May 15.

By Ajay Sukumaran in Hubli