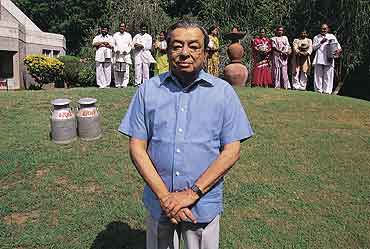 I Too Had A Dream
By Verghese Kurien By as told to Gouri Salvi
Lotus Roli Pages: 250; Rs 395
A favourite game some of my close friends and I indulge in periodically is to draw up lists of men and women who should have got, or deserve today, the Bharat Ratna. Names on our lists vary from the late H.D. Shourie and Satyajit Ray to Baba Amte, Anna Hazare, Atal Behari Vajpayee, Ela Bhatt, Mahasweta Devi and a few others. One name that appears on everyone’s list is that of Verghese Kurien. He has already got a Padma Shri (1965), Padma Bhushan (1966), Padma Vibhushan (1999), the Magasaysay Award (1963), Wateler Peace Prize (1986), the World Food Prize (1989) and honorary doctorates from many universities. He is now 84 years old. He has told his life story and how he turned his dreams into reality to Gouri Salvi, a freelance journalist of Mumbai. She has done a very good job in piecing it together.

Kurien was born in 1921 to a well-to-do Syrian Christian family of Calicut. A bright student, he was with the Tatas after graduating in science and engineering from Madras University. He applied for a government scholarship for higher studies abroad, hoping to return to his job with added qualifications. One question put to him by a member of the selection panel changed his entire career. He was asked, "What is pasteurisation?" He answered correctly that it was processing milk to make it last longer. He was told he’d be sent to Michigan State University in the US to study dairy farming and milk production. He was flabbergasted but accepted the offer. If he changed his mind after he returned to India, he would have to repay the government Rs 30,000. He did not have that kind of money. So a very sulky young lad found himself in a dusty little town—Anand—in Gujarat to ensure continuance of milk supply to Bombay. He could not speak Gujarati, was a beef-eating Christian and a bachelor. No family in Anand was willing to have him as a paying guest. He converted an empty garage into his home.

It did not take him very long to befriend locals, chiefly farmers who owned buffaloes and sold milk to earn their livelihood. He found two stalwarts to support him: Tribhuvan Patel and Miraben, daughter of Sardar Patel. He formed the Kaira District Cooperative Milk Producer’s Union, better known after its butter, Amul.

Luck was on his side, or so he believed. Professing to be an unbeliever in the occult, he had his fortune read by the length of his shadow at noontime. The shadow reader told his past accurately: he did not like his job and would leave it in a month. Also, "your career is set for a phenomenal rise—the kind you can never imagine". Kurien told his biographer, "In hindsight, it could not be truer." He quit the government creamery and joined the Kaira cooperative. The rest is history.

The Anand milk cooperative was modernised. When President Rajendra Prasad came to lay its foundation stone, a mouse came out from nowhere and jumped on the stove. "The entire gathering was overcome with joy," says Kurien, "because the mouse is seen as Lord Ganesha’s vehicle." So, with the blessings of Ganesha, the lord of auspicious beginnings, began Kurien’s meteoric rise to dazzling heights.

Soon Bombay was getting its fresh milk supply from Anand by train with specially designed wagons rather than the local doodhwala. It began to produce butter and knocked Polson from the market. Dairy specialists from New Zealand, Switzerland and Holland were of the considered opinion that milk powder and condensed milk could not be produced from buffalo milk. Kurien’s team produced both without a drop of cow’s milk added to it. Whenever government babus or ministers created hindrances, Kurien had the backing of all Gujarati MPs and ministers, from Sardar Patel, Morarji Desai, H.M. Patel and Manubhai Shah to back him up. So did a succession of PMs, from Nehru, Shastri, Indira Gandhi, Morarji Desai and Rajiv Gandhi. Once when agriculture minister Rao Birendra Singh wanted to remove Kurien from his post, he was dropped from the cabinet. Another time when Babu Jagjivan Ram wanted to do the same, he was sternly told: "Don’t touch Kurien."

Kurien was asked to replicate the Anand model in India’s other metros—Delhi, Calcutta, Madras—he did so with equal success. ‘Operation Flood’ made the country self-sufficient in milk and its byproducts. He used the best ad firms. Even the Pakistani government invited him over to perform the same miracle in their country.

The self-congratulatory tone in the narrative is understandable. Kurien has much to pat himself on the back. His tale as retold by Gouri Salvi makes better reading than hearing him narrate it himself. Buffalo milk, butter, milk powder, condensed milk, ice cream, dahi and ghee do not make scintillating topics for conversation.

Slice Of The Pie