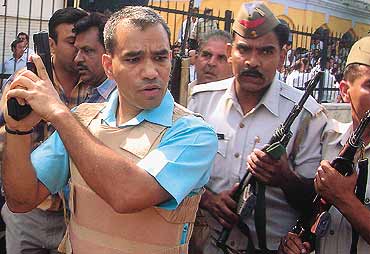 Navneet Sikera
No. of Hits: 50

Better known as ‘UP’s Daya Nayak’, 36-year-old Navneet Sikera has at least 50 encounters in his kitty. He claimed his first few victims in Muzaffarnagar, notorious as the kidnapping and extortion capital of Uttar Pradesh. And continued his encounter spree when he moved to Varanasi. It was in Meerut, however, that Sikera turned suspect as an ‘encounter’ specialist. In a sensational case involving a daylight gang war, dreaded gangster Ravindra Bhura was killed in the Meerut court premises. Sikera drew flak for having "engineered" his killing and he was dragged to court by the gangster’s supporters who filed murder charges against him. Some of his other encounters in Varanasi and Meerut too came under the scanner; it was alleged that they were sponsored by rivals of slain criminals. In Muzaffarnagar, though, Sikera, has his share of fans. Among them is Dr R.K. Gupta, a leading physician, who has gone to the extent of penning a book on the cop, whom he refers to as his godfather. The reason: when he was kidnapped and held for a ransom of Rs 1 crore, it was Sikera who freed him a week later. Sikera is now an SSP, currently on deputation with the Provincial Armed Constabulary. 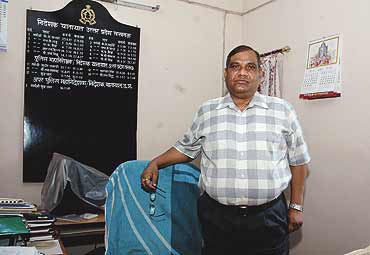 Additional DGP Brij Lal still figures among UP’s top encounter specialists. It was during his posting in the Jalaun, Agra and Meerut districts that he launched his campaign against dacoits. Lal says he never believed in carrying out his encounters at night. "I made it a point to carry out all my operations during the day, largely to dispel doubts over the genuineness of night encounters, which were commonly believed to be fake." His most-talked-about stint was as SSP of Meerut between 1991 and 1993 when he set a record of 53 encounters. Remembering his most exciting encounter, Lal discloses how he chose to act as a decoy and become part of a ‘fake’ marriage party to gun down Haryana gangster Tej Pal Gujjar in Bulandshahr. Decorated twice with the President’s gallantry medal, Lal has now reached the level of additional DGP, and has become too senior to be part of an encounter team. Lal claims he insisted on a magisterial inquiry into each of his encounters. "You can go into the records and confirm that each of my encounters were followed by magisterial inquiries, so that the public could express their views and everything was above board."

Rajeshwar Singh
No. of Hits: 23 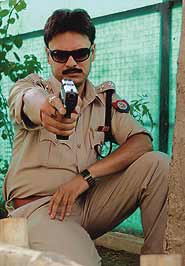 Twenty-three encounters at 32. Young DSP Rajeshwar Singh’s story is straight out of a Bollywood film. Son of a former DIG who fought dacoits joins the police, marries an IPS officer and then gets down to fighting the bad guys. In his two stints in capital Lucknow, Singh executed 15 encounters. Then posted in Allahabad, he got cracking there as well. Singh’s best-known encounter was with contract killer Vijay Menon whom he shot down in a fierce daylight gunbattle at an open-air restaurant in Lucknow. "Had I not been really clear in my mind, and swift, his bullet would have killed me," he recalls. He speaks of encounters as a tough option before a police officer. "You have to be extremely sure about the identity of the person. I do not deny that it is a difficult decision because there could be a mistaken identity sometimes and that could land a cop in very serious trouble," he says. Singh is proud of the fact that not one of his encounters has come into question. "When you do not indulge in fake encounters only to gain some brownie points, then you do not have to worry."