'US Domestic Laws Define The Boundaries Of The N-Deal'

As senior advisor to the US State Department, this Indian American strategist shepherded the deal in Washington and kept the faith 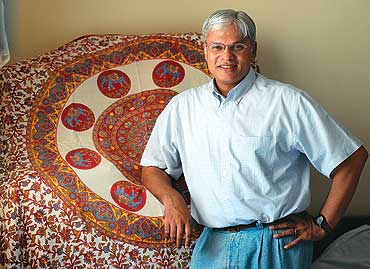 outlookindia.com
-0001-11-30T00:00:00+0553
When the new history of Indo-US relations is written, Ashley J. Tellis, an Indian American strategist, will find a very special place in the riveting narrative of how the nuclear deal was conceived, birthed, nurtured, protected and finally delivered against heavy bureaucratic and political odds. As senior advisor to the US State Department, Tellis shepherded the deal in Washington, liaised with the Indian government at the highest levels and, most importantly, kept the faith. He spoke to Seema Sirohi.

To what do you attribute the constant tension in getting the deal through?

This was built into the very nature of the initiative. The administration sought the deal primarily as an effort at building a new relationship with India, whereas many in the United States, including Congress, would acquiesce to it only to the degree that it contributed to non-proliferation objectives. Since the deal was to change over 30 years of US policy, it wasn't easy.

The bill to approve the deal says that the Hyde Act would be supreme.

But the Hyde Act is a big problem for India.

It's mainly a rhetorical problem because the Indian government has asserted that the Hyde Act and other US legislation do not bind India. That's both right and wrong. It's right in that India is not party to the Hyde Act or the Atomic Energy Act but it is wrong in that these domestic laws define the boundaries within which the 123 Agreement has been negotiated.

The bill says that if the US terminates supplies, it should also block others from supplying India....

India can still go to other countries in such a contingency. Congress has expressed its intention but how that is implemented will depend on the executive and the circumstances. Moreover, the international community is under no obligation to comport with Congressional preferences.

Will President Bush take care of India's concerns when he signs the bill into law?

I don't know what his statement will say. What matters is the principle. Every president since Richard Nixon has very zealously guarded and protected his prerogatives under the constitution. So I expect that President Bush, if he issues a statement, will say that he will implement the legislation without undermining his prerogative to conduct foreign policy.

Will Bush's commitment in his statement bind future presidents?

No signing statement issued by one president binds another. Ultimately, it all depends on what the policies of the day are but the policies towards India will only grow more liberal over time.

Not really. The reprocessing agreement will be treated as a subsequent agreement, which does not require affirmative Congressional approval. If Congress wants to disapprove of the agreement, however, it will have to find a veto-proof two-thirds majority.

The tough language has created disquiet in Delhi.

Yes, the disquiet has arisen because everyone in India wanted literally a one-line resolution of approval. While that was desirable even from the administration's point of view, it was unrealistic. Our Indian critics shouldn't forget that despite Congressional discomfort with the deal, it has essentially voted a resolution that does not materially change anything fundamental in the 123 Agreement. It has articulated various expressions of policy, but little else. There are presidential reporting requirements and determinations, which are operative, but these don't burden India. The bottom line is that the legislation doesn't change anything that the US or India has committed to. We shouldn't miss the forest for the trees.

Would there be trouble if India were not to follow the US line on Iran?

I think there will be no consequences at all for the deal. India doesn't follow the US line in the WTO, it doesn't follow the US line on climate change. Why should Iran be any different? The two are not linked. Our US opponents forced a linkage because they were trying to get leverage during negotiations. India will be free to pursue its own foreign policy and we will do the same with ours.

Why did the US decide to do this deal?

There are sound strategic reasons for it. It was to engineer a new beginning between our two countries. This administration felt very strongly that the old policy of trying to target India was not yielding fruit, and that it had become counterproductive. So Bush made the bold decision that he was going to change existing policy in very dramatic ways. Over the last four years, he put in place various building blocks to implement this change.

Was it partly driven by the rise of China?

It has nothing to do with the rise of China directly. The purpose of the initiative was to strengthen India, help it to grow as a power of consequence. That objective, if successful, would be good for India and the United States: it would help to preserve an Asia not dominated by any single power.

Did you ever feel the deal may not survive?

I never believed its demise was ever a possibility. I was in very close touch with leaders at the highest levels in the Indian and US governments. Whatever the uncertainties in the body politic, the president and secretary of state never wavered in their determination to push hard once they got the go ahead from India. PM Manmohan Singh was absolutely determined to make this happen. I kept telling my colleagues that one way or other we were going to do this.

He played an extraordinary role. Next to the PM, he was the singularly most important individual at two or three different levels. First, only he could negotiate with the Left—he was always very sober and never victim to extravagant expectations. Second, his bureaucratic weight in the government and his years of experience were critical. He kept the bureaucracy going, reached out to the coalition, dealt with the press, and argued the case vigorously in Parliament.

No, I am not. I think Sonia Gandhi was obviously critical as was Rahul. But whatever they did, they did behind the scenes, at a level I was not privy to. It is quite obvious that this initiative couldn't have gone forward if Sonia had not made the extraordinary political decision to confront the Left. That was ultimately her call.

If the Democrats come to power, what are the implications for the deal?

I hope they stay the course. With the deal completed, the action now moves to the private sector. The goods and services of interest to India are not provided by the US government but by private companies. The government is an important bystander because it controls licensing. If you get an administration that is uncomfortable with the deal, you could postulate that there might be some reluctance to issue licences freely. But on the other hand, any future administration will have to appreciate the consequences for US industry if it were to implement licensing policy in a curmudgeonly fashion.

The great thing about the deal ultimately—and this is George W. Bush's most magnificent bequest to India—is not simply the restoration of the US-Indian tie in regard to reopening civilian nuclear commerce but rather the integration of India into the global nuclear commerce regime. What Bush has effectively done is to provide India with multiple lifelines if for whatever reason the US is unable to deliver in the future.

You are an advisor to Senator John McCain's campaign. Describe him.

He is quite a remarkable man. He has a strong sense of duty, honour and commitment to country. He is very focused on thinking about the world and the US in strategic terms. He is not driven by ideology or whim. There is a strategic consciousness that he brings to bear, a consciousness that takes him pretty much in the same direction that it took President Bush as far as India is concerned. If you have a McCain administration, you will have nothing but very good news from the perspective of US-India relations.

Weighing In For Life