The mandir's still on his mind, but Katiyar is treading cautiously 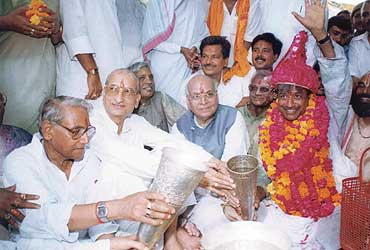 outlookindia.com
-0001-11-30T00:00:00+0553
Firebrand BJP leader Vinay Katiyar's austere, frills-free apartment in New Delhi's North Avenue was awash in rose petals last week. As news of his appointment as BJP Uttar Pradesh president got around, the inevitable jathas of sycophants smothered him in garlands and stuffed him with laddoos. It was left to Prime Minister A.B. Vajpayee to strike a note of caution: "All the news channels are calling you a kattarpanthi (hardliner). Walk carefully, you have a hard road ahead of you. What will you do?"

"I'll create a Hindu rashtra," Katiyar shot back, blunt as always and pretty much conforming to the Sangh parivar's expectations of him. Appointing Katiyar signals two things: a return to Hindutva and to Govindacharya's social engineering formula, both of which had suffered a setback with Kalyan Singh's exit from the party. The fragmentation of the Hindu vote and the defection of the backward castes to the Samajwadi Party and BSP in the recent assembly elections had left the BJP central leadership worried. Katiyar, closely identified with the Ram temple movement (he's one of the accused in the Babri Masjid demolition) and a prominent backward caste (Kurmi) leader, was seen to fit the bill on both counts.

HRD minister M.M. Joshi, who's been playing a central role in UP affairs after Mayawati's advent as CM, is believed to have lobbied with BJP president Jana Krishnamurthy for Katiyar's appointment. He also spoke to the VHP leadership, which was quite willing to endorse Katiyar as the right man for the job, given his Bajrang Dal antecedents. Joshi also convinced the PM that the BJP's only hope in UP lay in reverting to a hardline, pro-mandir, pro-Hindutva stance.

Katiyar's role in defusing the Ayodhya crisis in March is seen as an important reason for his elevation. In Parliament and before TV cameras, it was he who led the charge against his own government for harassing Ayodhya-bound sants and creating roadblocks for the VHP. But behind the scenes he worked furiously to bring about a compromise and eventually succeeded, earning brownie points with the PMO. But he insists he is nobody's man: "Sabse baat karenge, kisiki god mein nahin baithenge (I'll talk to everyone, but won't sit in anyone's lap)."

In the context of the Uttar Pradesh BJP's internal politics, Katiyar's appointment is understandable. It's meant to defuse intense infighting between the foursome that has been running the show: Kalraj Mishra, ex-CM Rajnath Singh and ministers Lalji Tandon and Om Prakash Singh. Post Mayawati, Rajnath was made UP and Uttaranchal in-charge, but Mishra was left out in the cold. He got the message and quit as state party chief, saying, "It is difficult to revive the state BJP when four of its senior leaders are at loggerheads." He reportedly proposed Katiyar, who's not identified with any faction, as his successor. Besides, if anyone can fend for himself in UP, it's Katiyar.

The question is whether Katiyar will be able to pull along with Mayawati. The two share a friendly, if uneasy, equation. So far, she's enjoyed a free run, but Katiyar tends to speak his mind and will demand an equal share. "All district officials should be told not to meddle with my people," he says.

For now, he's not interested in toppling games, his priority being to take the BJP from the No. 3 to the top slot. To that end, he wants to boost the shattered morale of workers and rebuild the party from the ground up. Party workers have welcomed his appointment since he's considered "one of them"—a good, old-fashioned Rambhakt who's risen from the ranks. On the possibility of Kalyan Singh—who's been cosying up to Mulayam Singh—returning to the fold, he says all options are open: "Hindu dharam mein chhodne ki nahin, nibhane ki parampara hai (The Hindu tradition is not to renounce, but to fulfill the duty of relationships)".

A point in Katiyar's favour is his financially clean image; what he lacks in sophistication he makes up for in probity. He is said to have spent precisely Re 1.25 on his son's wedding. Having promised a poor, ailing constituent that he'd get her daughter married, he kept his word by marrying the girl to his own son.

Those who know Katiyar well will testify that he has mellowed in the last decade. In 1992, en route to Ayodhya, Katiyar was at his fiery best, telling friends: "Ham khaali haath nahin lautenge (We won't return empty-handed)." The same Katiyar told the press in March that the court's verdict in the Ramjanambhoomi matter should be awaited. While his commitment to the mandir remains, he has learnt diplomacy.

He was picked up by VHP leader Ashok Singhal for the Ramjanambhoomi movement in the '80s who then passed him on from the Bajrang Dal to the BJP. A three-time MP, who won from Faizabad in 1991, 1996 and 1999, he was too much of a hardliner to be accommodated in the Union cabinet. His appointment is a sign of the BJP revving up for the 2004 polls, rather than for a toppling exercise. Katiyar's prepared for a long haul: "I'm not like Hanuman who'll become aged. I'm like Jambvant who'll remain steadfast always."

How Grey Is My Valley