Up There On Ground Ziro

It might not be seventh heaven, but at 6,000 ft above sea level, Arunachal offers a taste of it 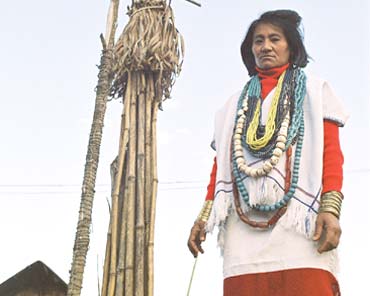 outlookindia.com
-0001-11-30T00:00:00+0553
For a fabulous start to 2008, we suggest you head to Ziro and get yourself invited to Taku Pilliya’s party. From January 9, he will be hosting the Murung festival, at which the entire Apatani tribe is welcome at each other’s banquets. About 5,000 people are expected, and Pilliya will spend about five lakh rupees on food and apung, a warm millet beer, for his guests. Taku Riniya, his wife, shows me a bundle of dried field rats—a prized local delicacy that will be gifted to the presiding priest.

If that isn’t incentive enough, the drive to Ziro—from the sleepy town of Pasighat, and traversing through sublime mountains and lush valleys, higher and higher and deeper and deeper into the tribal heart of the state—is. Every bend you take, every curve you snake, you come upon a vista that if you glimpse in the raw for a moment, it’s worth all the months on a calendar.

Our journey begins in Pasighat, often called the gateway to Arunachal. Established by the British in 1911, it is among the state’s oldest towns, situated on the banks of the Siang river. A quick round of the town museum helps us make passing acquaintance with the handicrafts, weapons and traditional attire of Arunachal’s 26 major tribes. For a more intimate encounter, though, you have to strike it as lucky as we did—get invited to a tribal home. We were, courtesy Tate Tatak, a state official who hails from the Adi tribe. Beautiful, smiling faces usher us into spacious, thatched huts, perched atop wooden stilts. Entry to every house is through a big verandah; the interior is one huge room with a fireplace in the middle, the hub of all family activity. All tribes of the state, we discover in the course of our journey, live in similar huts, though the floor space keeps shrinking as you go uphill to the Apatani villages in Ziro, where the abodes are the smallest.

From Pasighat onward, the road winds its way through hilly rises carpeted by expansive orange orchards. The trees hang heavy with luscious fruit at this time of the year, waiting to be plucked. Suitably tempted, we buy a basketful of 30 large oranges for ten rupees; along the entire sojourn, each juicy-sweet slice affording a momentary, but immensely satisfying, distraction from the fern-draped hills standing tall around us.

The road hereon meanders along the Siang, now climbing, now dropping through terrain carved out by the river. The whole journey takes six days, but it is six hours to our first waystation, a district headquarters named Along. Halfway to Along, we have a surprise waiting in store for us. An expanse of white sand beach skirts a lazy bend in the Siang. All of a sudden, we are children again. We kick off our shoes and race along the edge of the water. It’s afternoon. 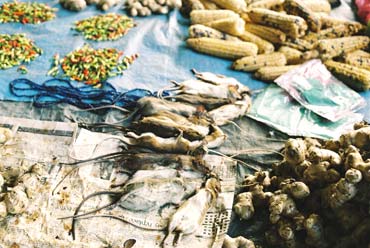 An hour ahead is Patum, where the Siang breaks into small rivulets before collecting itself once again to pass under a quaint hanging bridge, which a nearby plaque announces was inaugurated by Madhu Dandavate in the late ’70s. More inveigling than the scenery, or the footprints of the Janata Party in these parts, is the birdlife. Among the plentiful wagtails, hill mynahs, sultan tits and little forktails we spy a rare rufus-necked hornbill. It is late by the time we reach Along (or Aalo as it is now known) where we are to spend the night.

Early the next morning, we take a northward deviation, to Mechuka, 45 km short of the border with Tibet. The road hugs the Siom in these parts, dropping down to the valley, taking you right into the view. It’s misty and nippy as we start, but the mountain air works better than caffeine. We stop at Kaying, a small village on the 195-km route for some hot, steaming thukpa, before renewing the steep climb. Soon, snow-capped peaks come into view, and in nearer focus, exquisite orchids festooning the trees. The road gets bumpy around here, the ride is sapping, but all fatigue evaporates when our vehicle takes a hairpin turn and we are treated to a jaw-dropping spectacle—a 300-ft-high waterfall on one side of the road and a steep gorge on the other, with the Siom churning down below. On the other side of the gorge, the afternoon sun lights up a vast, bare rockface, a perfect if solemn finishing touch to the awe-inducing visual spread. 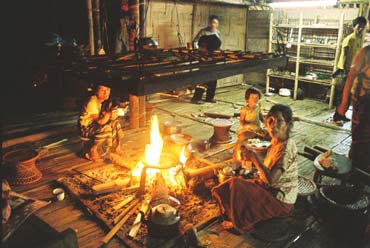 Home and hearth Inside a traditional Adi dwelling, centred around the fireplace

But Arunachal isn’t done with us yet. No superlatives can do justice to the beauty of Mechuka. We enter the valley through pine groves and forests of towering holock trees, past rolling grassland glinting gold in the light of the setting sun. The Siom, called the Yomgo here, flows along pretty wooden houses and prayer flags fluttering in the wind. Most of the town’s 3,000-odd residents belong to the Memba tribe and are Buddhists. At 6,000 feet above sea level, the mercury dips below freezing point in the winters, and for a few weeks the snow descends from the looming peaks to envelop Mechuka. We spend the night at the cosy wooden inspection bungalow, where a wood-fired bukhari keeps us warm. In the morning, we trudge uphill for nearly an hour to reach the 400-year-old Samten Yangcha Gompa, a monastery that houses a collection of antique weapons, armour, thangkas and manuscripts. This monastery, a lama tells us, is unique because the interiors are made entirely of papier mache and all its statues are of clay.

The Mechuka detour over, we head back reluctantly to Along and resume the road to Ziro. A 10-hour drive remains but we’re riveted to the view—serene valleys along the courses of the Upper and Lower Subansiri rivers, hillsides dotted with orange, banana and pineapple plantations. After crossing the Lower Subansiri through a hanging bridge at Tamin, the vegetation begins to change into forests of blue pine, framing lush paddy fields. We begin the ascent to the Ziro plateau.

Ziro captures our hearts instantly, not least because of our delightful hosts. Tasso Pullo belongs to the Apatani tribe, which calls Ziro its home. As per legend, the women of the Apatani were so beautiful that they were driven to safeguard themselves by tattooing their faces and putting coin-sized plugs in their nostrils. We dine with Tasso Pullo in Hari village, four km outside Ziro. He plies us with mugs of apung beer, delicious rice balls, chicken and eggs, fish and fermented beans cooked inside hollow bamboo stems, and roasted squirrel. The next day, we meet Taku Pilliya, who tells us about his plans for the Murung feast. We’ll be back in Ziro on January 9.

The drive from Pasighat to Ziro, with a detour to Mechuka, takes six days. Indians need an Inner Line permit, foreigners a Restricted Area permit. For more information call Tourism Directorate of Arunachal Pradesh at 0360-2214745/2214752; or write to secretary@arunachaltourism.com, info@arunachaltourism.com