Up For Grabs Mahatma 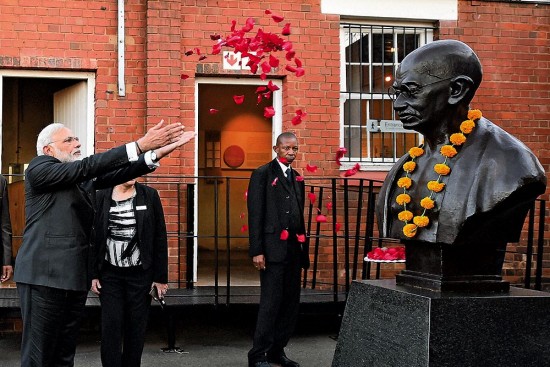 Cultural amnesia. It’s what makes historically ironic app­ropriations possible. Amid a violent anti-cow-slaughter campaign in many states, these words by ­Mahatma Gandhi have a prophetic ring to them: “How can I force ­anyone not to slaughter cows unless he is himself so disposed? It is not as if there were only Hindus in the Indian Union. There are Muslims, Parsis, Christians and other religious groups here.” He said it during a prayer discourse on July 25, 1947.

The NDA government is all set to launch a year-and-a-half-long commemoration to mark 100 years of the Satyagraha movement, launched on April 11, 1917. Exactly a century ago to the day, the Mahatma started his inf­luential Satyagraha (literally, ‘holding on to truth’) movement from Bihar’s Cham­paran district. The celebrations will culminate in Gandhi’s 150th birth anniversary in 2019, to be marked by a bigger spectacle. It could hardly have escaped national attention. The BJP’s embrace of Gandhi and ­national icons, from Sardar Patel to Bhagat Singh and B.R. Ambedkar, is helping the party forge a new political persona.