Despite apprehensions voiced by trade unions, the proposed reforms can only benefit the majority of the working class 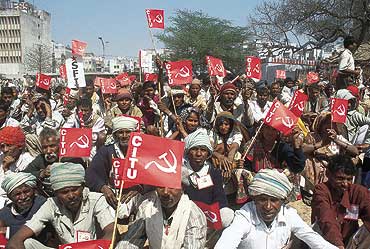 outlookindia.com
-0001-11-30T00:00:00+0553
Take a boat down the Hooghly in Calcutta and within minutes you'll come across hundreds of dilapidated jute mills with huge rusty padlocks on their black gates, quiet as death. Or, think textiles and drive down Upper Worli. The view won't be much different even in the heart of the bustling financial capital.

These ancient buildings are stark reminders of our dirigiste past. Traditional industries failing to evolve with change in demand within a system of controls and licences, making workers starve, yet unable to breathe their last. Now, conjure up a vision of a flexible labour market—more jobs, improved work and safety conditions even with less security, free exit and entry.

Isn't the second picture more appealing? Isn't a job that changes occasionally better than no job at all!

Yashwant Sinha thinks so. At least that's what his vigorous Budget 2001 seems to suggest: he wants the Industrial Disputes Act (IDA) and Contract Labour Act amended and the Sick Industrial Companies Act (SICA) repealed. What are the changes he wants? Flexibility for employers with less than 1,000 workers to retrench staff sans governmental consent (previously, the number was 100), while simultaneously tripling the compensation payable from 15 days' salary for every year of completed service to 45 days. That means a person with eight years of service will get a full year's wage as retrenchment compensation. There's also group insurance for organised sector workers to help them survive periods of unemployment.

Companies can now also use contract labour for short time periods without being bound to make them permanent. And bankrupt ones can be easily wound up with the repeal of sica. The bottomline: Everybody gains. The employer, the employee and with them the economy.

Except for the trade unions, irrespective of their colour. As expected, they are badly upset. And their virulent condemnation of the proposed amendments makes it clear that the Centre has stepped into a political minefield. To make matters more embarrassing, even the rss-affiliated Bharatiya Mazdoor Sangh (bms) has come out strongly against the Vajpayee administration.

Whatever the public perception of the trade union protests, it could signify only a lot of sound and fury and little else. For, they represent only vested interests. In reality, unions represent only a fraction of our national labour force. The 420-million-strong labour force is only 40 per cent of our population, of which organised or unionised labour is only about 10 per cent. So, effectively, trade unions speak for a mere four per cent of our population. Ninety per cent of our labour remains outside their ambit and they stand to gain by the much-delayed labour reforms.

The message was rammed home recently by the prime minister himself. At the recently-held 37th Indian Labour Conference (ilc), he clearly dismissed the demand for a rollback on liberalisation. He reaffirmed his commitment to labour security and promised to protect their interests while privatising public sector units or while carrying out other reforms, but ruled out protection for ever. Taking the cue, even labour minister Satyanarayan Jatiya told Outlook: "In the changing economic scenario, staying aloof will lead us nowhere and the transitional problems shouldn't be seen in isolation."

Post-Vajpayee's snubbing at the ilc, the unions have stepped up their opposition and collaborations have been sought for a series of nationwide agitations.They are desperate to "take the anti-labour measures to where it should be taken—the people".

Laments Centre for Indian Trade Unions (CITU) secretary W.R. Varada Rajan: "International capital will run our country and labour's priorities will come last." Agrees bms spokesperson Laxma Reddy, who feels Sinha has made a mockery of our labour laws—laws that have always been drafted through tripartite talks with the unions. "These are the very people who had once fought to protect the workforce and farmers from the Congress misrule. Now they themselves have embraced such policies," they fume.

Economic theory, however, dissects their argument to pieces. "With respect to labour, power and the pds, this year's budget should have come in 1992...but it's better late than never," points out Subir Gokarn, chief economist at the National Council of Applied Economic Research (ncaer). Why? The lack of an exit policy has resulted in, among other things, relatively high cost of industrial labour. As a result, the industry has been forced to implement capital-intensive techniques in a capital-starved economy. With the benefit of hindsight, we are close to accepting that loss-making units never benefit labour, relocating them to thriving profit-making operations does. And West Bengal is a perfect case in point where productive employment has plummeted.

Gokarn is confident that the labour reforms will lead to growth with jobs. Not just jobs, but manufacturing jobs as well. "The rate of growth of organised sector employment (both private and public sector) has been only 0.4 per cent in 1999 and over the decade it's just one per cent... it's clear that the government cannot hire anymore, so the private sector must be freed from its shackles," he says.

Trade unions, feel economists, protect only the 'insiders'—the ones already employed—but there's a huge constituency waiting for a break. "It's anti-incumbency for the former, a great opportunity for the rest and politicians have to take notice of them," says Gokarn.

What do the labour amendments really mean? How will they help our labour force? Outlook demystifies the government's intentions—read on.

To begin with, dumping sica means that winding up of sick companies will become fast and easy. In India, a manufacturing company turns sick when its net worth becomes negative. In other words, the value of assets become less than the value of liabilities. Under present law, promoters of such units can apply to the bifr for a rehabilitation package but to do that it must be registered for at least seven years and must have three consecutive years of losses.

If the bifr accepts the application, all claims of creditors are suspended till it comes out with a hearing. The bifr is actually a defunct institution severely lacking in infrastructure and specialised judges, which outlived its utility at least two years ago. Even the Expenditure Commission has suggested its wind-up. isi professor Shubhashis Gangopadhyay describes it as "nothing more than an employment exchange for retired judges which makes it completely out of sync with the economic activities."

In comparison, in England, banks have the authority to move the court and immediately an administrator is appointed who can either suspend the management or decide whether the company can be restructured. He can also invite the receivers to sell the assets rightaway. However, in the US, a company can apply for Chapter 11 bankruptcy.Once that happens, a special court's judge plays the role of the administrator. The management stays on but under strict surveillance of the judge.

Interestingly, both in UK and the US, the creditors remain assured. But in our present system, the management is never sacked. So there's always the incentive for the promoters to approach the bifr as he gets to keep his assets, without paying off his creditors, sometimes even eating up the rehabilitation assistance.

That's because the bifr can ask lenders to further lend to a company that has already defaulted on its original loan. Who are these lenders? Banks and other financial institutions which lend the average Indian's money. So, what usually happens is that the promoters get ample opportunity to not only strip the company of its assets while the bifr mulls over the rehabilitation regimen, but also examine the possibility of arbitrage. It's so easy since no official records are maintained and no annual report published. And, lest we forget, throughout this tedious exercise, the labourers are not paid a penny. So what are sica and bifr? Protectors of the labour force or institutions to rip them off?

However, there's still a rider. The Centre intends to replace the bifr with a national company law tribunal, a decision that many feel may boomerang. Although the details are still fuzzy and the law ministry officials are trying to speed it up, one tribunal catering to cases from all over the nation will surely delay winding up of incompetent units.

Ask any management and they will squarely blame labour for industrial sickness. But if retrenchment becomes easier, that excuse will not work any more. "If you can fire easily, then the manager becomes responsible when the company goes bust, not the labour. So this will actually improve managerial efficiency," says a senior economist at the Planning Commission. But along with the easy exit route which the government has suggested via the Industrial Disputes Act amendment, Gangopadhyay insists on a transparent formula of severance pay. "Proper safety nets like unemployment insurance is absolutely necessary before the amendments are implemented," he says.

The budget proposal takes the issue fully into account as the layoff cost has been trebled from the hitherto 15 to 45 days—high enough to scuttle random exploitation and deter deliberate sacking.

With outsourcing becoming easier, contract labour is one of the contentious issues. The change in cla should ideally make obtaining licence for a specific job a lot easier. The contractor may be asked to register himself as a contract employer, as is required of the principal employer at present. Moreover, a gratuity fund for them is also in the pipeline as is a steep increase of penalties for violation of the Act.

That's a step ahead as employers, including the contractor, have so far ignored the entire segment which had ultimately forced Parliament to pass the Contract Labour (Regulation and Abolition) Act in 1970 to prevent the rampant ill-treatment. But according to cii advisor Omkar Goswami, their importance will rise across the board.

"The new regulations will make it imperative for both the principal employer and contractor to abide by all regulations. The trend of contract labour across the world allows such workers to be on par with the permanent workforce (a breed which is shrinking fast) for all wages and allowances.And this will happen in India as well. So where is the problem?" he asks.

The working class is a sizeable votebank in India, lending the issue a high political colour. The ball was set rolling by the Congress. Sputters party leader Pranabh Mukherjee: "If profit-making is the only goal and hire-and-fire without sufficient checks the sole agenda, then forget about democracy. It is contrary to a welfare state. The Congress will stop the amendments in the Rajya Sabha; we just won't buy it."

Others in the party, such as Madhya Pradesh chief minister Digvijay Singh, react with moderation. "It is necessary that the government should convince other parties that it will safeguard the labour interests while unshackling the industries at the same time," he says.

To adhere to the current political mantra of liberalisation with a human face, the labour ministry is really playing it safe. Jatiya has said that the amendments will come in the monsoon session, but he may even wait for the labour commission to submit its report on the changes. Clearly, for the government, it's difficult to be a working class hero.