Leprosy's ancient stigma still festers in India. It's time we cut the pain. 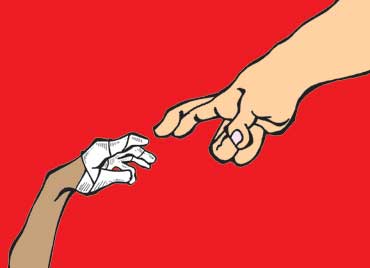 outlookindia.com
-0001-11-30T00:00:00+0553
The stigma born of leprosy cuts across all man-made barriers of race, caste, class and religion. Even after the leprosy bacteria is absent in the body thanks to now easily accessible medicine, the tell-tale scars pursue that unfortunate, affected person till the end. A generation or two ago, smallpox signs on the face were sometimes seen as a visitation of past sins. In the case of leprosy, this is sadly a perception that even the educated continue to have. From Malaysia to Japan to large parts of Africa, where the disease or its remnants exist, societal discrimination causes the leprosy-affected to be confined to slums and ghettos at one end of the spectrum, to more sanitised colonies and dormitories in more affluent societies.

Suresh (name changed), about 40, has no leprosy, but is a victim of its stigma. This is because his parents were afflicted with the disease. He was separated as a child from his parents and grew up in a hostel. That they are now cured seems to matter little to Suresh's peer group. He was lucky to get a government job. From the first, his colleagues began to shun him. What hurt him most, I once asked. He said his colleagues would not allow him to join them for lunch. A few weeks ago, some 18 years later, I asked him whether attitudes had changed. He gave a rueful smile that said all.

Suresh is fortunate. Not directly scarred, the security of a government job helped him break away from poverty and into the middle class. Asha (name changed), however, died a miserable death. Once the matron of a well-known prep school (where her charges over the years included many of the rich and privileged), she contracted leprosy in her later years. Terrified of its disclosure, she hid it for several years. Treatment in the early years would have cured her easily, and there would have been no ulceration. When nerve damage and ulceration set in, she became an embarrassment to her sons. Asha was brought to Mother Teresa's leprosy centre in Delhi. One day, when I was accompanying Mother Teresa on a round of the dormitories, she stopped to console Asha, a tiny woman with bandaged stumps for hands and feet. Mother Teresa told me she missed her elder son terribly. He had not visited her even once in the last few years.

India has eliminated leprosy as a public health problem. In the early '80s, the government set up the National Leprosy Eradication Programme. At first, the medicines were expensive and the administration seemed hard put to handle the enormous challenges of a 4 million caseload. But, a well-coordinated control campaign has proved its efficacy. Under the aegis of the Union government, multi-drug therapy is provided free of charge by Novartis through WHO. The central government provides the administrative apparatus, distribution and back-up. This effort is now also being assisted by Japan's Sasakawa Foundation, as well as by many committed NGOs. These efforts have helped to bring the caseload down to one case per 10,000 population (by December, 2005) and the total caseload to less than one lakh. A few states still lag behind, but we can see an end to this terribly disfiguring and traumatising disease. Speaking of NGOs, I recollect that two decades ago, I visited a German-funded NGO in Salem (Tamil Nadu) whose medical workers covered large distances to ensure that on the appointed day of each month leprosy patients were not only handed out medicines but actually took them, because an essential concomitant of the multi-drug therapy is the strict regularity of the regimen.

While control measures are firmly in place, it is necessary for us as a society to deal with the stigma that the afflicted, cured and even healthy children of the leprosy-affected face. Such is the discrimination that even 'normal' jhuggi-jhopri clusters will not accept anyone who has had any association with the disease. Society's boycott has an adverse affect on their mobility, inter-personal relationships, marriages, and sadly, employment. The disease is seen by even the most enlightened among us as a visitation of past sins or a sign of a hideous blemish. The result is complete exclusion—patients are not easily allowed to use public facilities or to send their children to normal schools. At best, they are seen as objects of pity; at worst, abhorrence. Today, other diseases are accepted—TB is no longer seen as threatening; cardiac disease is actually respectable, as it is viewed (somewhat simplistically) as a rich man's disease. Even AIDS is less dreaded than it was a decade ago, because the great and the good decided to lend the campaign their support. Similarly, the anti-leprosy movement in Africa got a boost when Princess Diana visited a leprosy station where she shook hands with its inmates. Today, in India, we need our icons to also shake a few disfigured, but by no means diseased, hands.

(Navin Chawla, Election Commissioner of India, is the biographer of Mother Teresa, and the author of a report on leprosy entitled The Vocational Rehabilitation and Social Re-integration of the Leprosy Affected in India.)