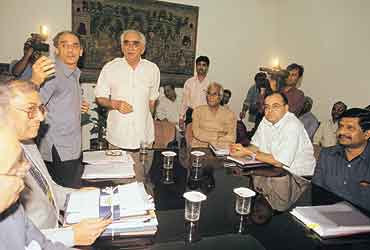 outlookindia.com
-0001-11-30T00:00:00+05:53
The new unified licensing regime may well create a fresh disconnect in the sector. What was being hailed by telecom minister Arun Shourie as the panacea for all problems may actually signal the beginnings of fresh battles—both in the courts and the marketplace, and among the players and between policymakers and corporates. Already, high-pitched ringtones are being heard, loud and clear.

For one, it will lead to a series of M&AS resulting in cataclysmic changes as far as the number of operators are concerned. Then, several firms may go to the courts to demand compensation since they believe they were forced to pay higher licence fees in the earlier regime. Spice Communications and Bharti have, incidentally, publicly made that demand. Finally, policymakers, including Shourie, will be criticised for openly favouring some players who will be the biggest beneficiaries of the new policy.

To refresh the reader's memory, under the earlier regime different licenses were required to offer cellular, limited mobility (wireless in local loop or WLL) and fixed line services. Therefore, companies had to pay fees according to the services they were offering. But now a single licence is enough to offer all three. Firms which had just one or two licenses and wished to offer all will now have to pay a differential based on what others have paid as licence fees in the past.

Sounds like a fair deal? Well, not for every party. For, while the proposal will enable WLL players to become fully mobile, there is little recompense for the existing cellular players. And that was really the bone of contention between the two segments: the latter believed that because WLL firms like Reliance Infocomm and Tata Teleservices offered roaming (or fully mobile) services, their operations were illegal. The unified licence will now become a way to legitimise that illegality.

Expectedly, the cellular players are up in arms. The Cellular Operators Association of India (COAI), which has questioned WLL's roaming services in the Supreme Court, has shot off a letter to finance minister Jaswant Singh stating that the unified licence regime is "partisan, one-sided and exhibits a predetermined mindset. We believe that the recommendations have many serious flaws, shortcomings and contradictions and are aimed solely at legitimising full mobility for WLL operators".

COAI says the new policy is a half-baked one. Reason: it only includes a few services, and not others like national long distance. (Even WLL firms like the Tatas support this contention.) Worse, it goes against what Shourie has been advocating: that a single licence for all services is the only way to remove the anomalies in the telecom sector. So, why has he chosen to include only three in the first phase? And why has he decided to wait for another six months before including other services like national long distance as part of the single licence?

Critics also point out that the new proposal is likely to favour only a select few of the existing players. Clearly, the biggest beneficiaries are the WLL firms, who also have fixed line operations. And Reliance is the biggest player in the WLL segment. As their infrastructure costs are only a third of the cellular firms, and they can use available spectrum more efficiently, WLL service providers can now easily wipe out competitors.

Not surprisingly, the WLL firms are ecstatic. Says a Reliance Infocomm spokesperson: "We welcome the recommendations ending the 'licence raj' in the telecom sector." Adds S.C. Khanna, secretary general, Association of Basic Telecom Operators (ABTO): "If all sectors are being opened up, there is no justification for keeping the most promising and growing sector under licence control." A Tata Teleservices spokesperson digresses: "A unified licence would increase tele-density and rationalise the licensing framework in consonance with the technology imperatives of convergence."

All that the WLL operators have to do now is pay the additional fees to migrate to the unified regime and penalties for offering roaming services. Reliance, which operates in 16 states, has been asked to pay Rs 1,581 crore on both counts, while Tata Teleservices, which operates in six states, would have to cough up Rs 545 crore. The cellular operators, though, are far from happy. Asks a leading cellular operator in Delhi: "How will levying a fine and additional fee on WLL operators help us? This is no compensation for us...."

So what happens to the cellular guys? Once the WLL players start their unlimited mobility services, smaller pure-play cellular players like Spice, Escotel, Fascel, BPL and Hexacom (Oasis), who run services in one or a few circles, will gradually find their survival at stake. So, they may be forced to either sell off or merge with the bigger ones. This has already begun—Escotel, for instance, may soon be sold to Idea Cellular.

A shakeout is imminent among larger companies too. To give a probable scenario, the Tatas may find it easier to start their own cellular services, rather than being one of the three shareholders in Idea Cellular; the other two being the Birlas and AT&T. Or consider another possibility. Bharti, which runs cellular services in 16 states and fixed ones in five, may find it difficult to match Reliance's muscle. Till recently, Bharti had the best telecom infrastructure along with its foreign partner, the Singapore-based Singtel, and was a leading cellular player. But Reliance's acquisition of broadband provider Flag Telecom and the unified regime will change that.

Bharti will now have to take Reliance head on. At the same time, the government is thinking of increasing foreign investment cap in the telecom sector from 49 to 74 per cent. The only bottleneck is the opposition from the country's intelligence agencies. Now add to this Singtel's public announcement that it wishes to increase its stake in Asian ventures. Can all this lead to Bharti's Sunil Mittal selling out to his foreign partner? We'll have to wait and watch.

Quite obviously, large but pure-play cellular firms like Hutch are also likely to get hurt. At present, none of the cellular players (with the possible exception of Bharti) are making money. Therefore, when they have to compete directly with the low-cost operations of WLL players, the former will really face the heat. The only consolation for Hutch: it has deep pockets to survive the onslaught.

It seems that the unified regime will accelerate the sifting out process, whereby only 4-5 players will remain in the telecom sector. Reliance and the state-owned BSNL are definite survivors; they might even thrive. The Tatas too are likely to remain in the business. Hutch will take a beating, but might protect its marketshare to an extent. And if Singtel plays a more prominent role in Bharti's business, it too could match the financial and marketing muscle of Reliance. The remaining ones—most likely, they will be history of sorts.

Knight Up, Sizing Up The Board