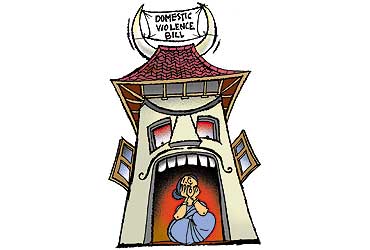 Women activists have been organising seminars and protest rallies against the Bill on a war footing this past week, drumming aloud the gross deficiencies including its definition of 'violence', its 'frightening omission' regarding a woman's right over her matrimonial home, and the regressive insistence on mandatory counselling for victims of domestic violence. The Bill as it now stands—say members of a nationwide coalition called the Women's Groups Campaign for a Comprehensive Civil Law on Domestic Violence against Women—will prove "very dangerous" in its implications.

"The Bill actually legitimises certain kinds of violence," argues Mumbai-based feminist lawyer Flavia Agnes. "It allows for a man to beat his wife under certain circumstances." For instance, the Bill says it is not domestic violence if it is not "habitual" and does not make the victim's life "miserable". Also, if a man beats his wife to protect his property it is not domestic violence as the Bill perceives such violence as the man's right to "defend" himself. These clauses worry activists like Anuradha Rajan of the International Centre for Research on Women (ICRW). Domestic violence as an offence punishable with imprisonment up to one year isn't going to get any convictions if definitions are so amorphous, she says. "It leaves too much to the subjective perceptions of judges and ignores all the detailed definitions of violence in international treaties to which India is signatory; definitions which acknowledge that women aren't just beaten, but psychologically, sexually, and economically abused as part of the daily torture they suffer at home."