This photgraph is of all that CPI leader A.B. Bardhan left behind when he died recently. Writer Amit Chaudhuri responds to it, ruminating on life, death and possessions. 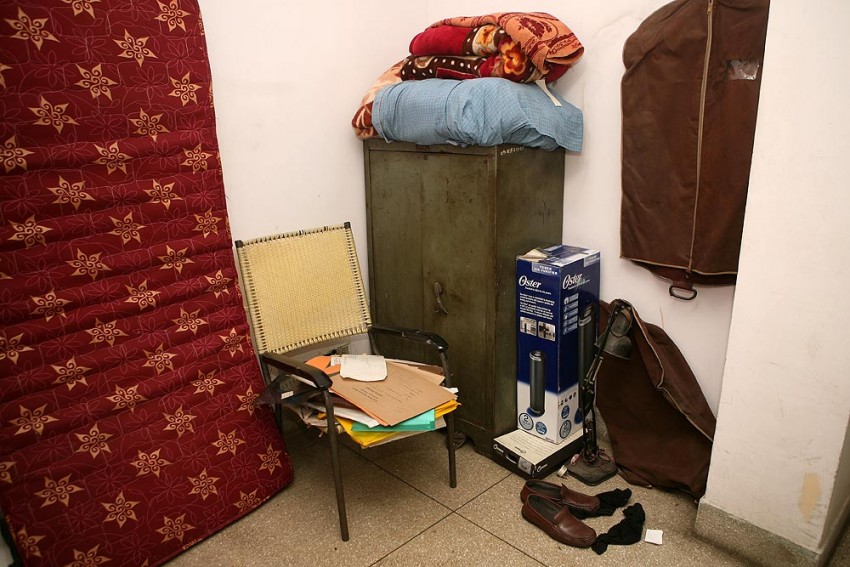 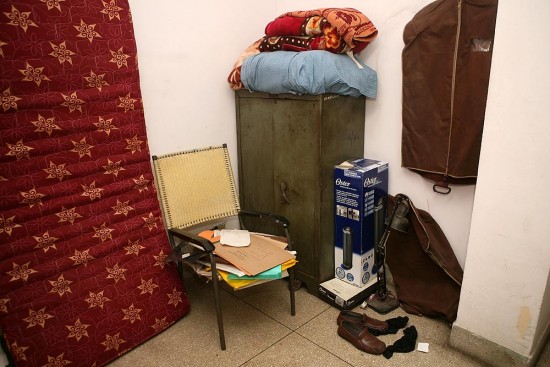 I know almost nothing about A.B. Bardhan. I wish I knew nothing about him, that I didn’t have the information that comprises the ‘almost’. Because, when I look at the picture of his room, my ignorance creates a sense of intimacy. The information I have comes to mean nothing—he was a member of the Communist Party; he appeared on television, haranguing the governments; he was from Barisal and became a trade unionist (these details I’ve gathered after his death). There’s a fatal belief that people have about writing—especially the writing of fiction, or of reportage that’s based on the same conventions—that you can add up important details, put together the principal inf­ormation, and make up a ‘character’. But can our sense of familiarity with a character actually come from this? Virginia Woolf challenged this notion  in 1924: “Some Brown, Smith, or Jones comes before [novelists] and says in the most sed­uctive and charming way in the world, ‘Come and catch me if you can’.... Few catch the phantom; most have to be content with a scrap of her dress or a wisp of her hair.” I put my attempts to know A.B. Bardhan to one side. When I look at the room and sense recognition, it doesn’t come from the facts I have told you—the facts that, even in their most skeletal form, should begin to point to a life.

The possessions that are so few as to be at once enumerable and oddly inessential; the near-absence of furniture; the sort of cupboard we call a ‘Godrej’— these speak to me. It brings back to me one of the contexts of the past: austerity. I’m speaking of an ethos which at that time was unobtrusive but definitive. Absence—of things, usually—denoted lack, but also implied grace. It contradicted today’s paradigm of ‘developed’ and ‘developing’. Fewer things lead to a peculiar spaciousness. I remember being struck by that spaciousness when visiting school friends who lived in government flats, or on trips to relatives’ houses in Calcutta. It was on my mind when, writing my first novel, I described a family excursion to people living on the outskirts of Calcutta: “It was not a big room. Despite its bareness, the impression it gave was of austerity rather than poverty. It made one ­remember that poverty meant displacement as well as lack, while austerity meant being poor in a rooted way, within a tradition and culture of sparseness, which transformed even the lack, the paucity, into a kind of being.... The objects in the room were numerous enough to be noticed and few enough to be...remembered.”

A life is not “series of def­eats”, as Orwell claimed. A life is a space. We find the space familiar, but don’t fully understand it. Again, I return to words from a notebook I kept roughly around when I was 26. Just as I was trying to make sense then of corners, rooms and houses, I was also thinking, almost for the first time, of what death means. These lines were written after my music teacher’s passing: “Once someone you love, in other words, someone you secretly believe to be immortal, dies, a hidden invisible door...a door which you never knew existed, opens unexpectedly, the dead man walks through, and the door is left ajar ever after. On this side of the door is your room with your furniture, the portraits of relatives, books on bookshelves, phone bills, children’s toys. On the other side of the door, left slightly ajar, is the white eternity. Through that half-ajar door, which both you and the dead man forget to close, will pass, in a procession, people you love and people you are indifferent to and people who are strangers. Last of all, you will pass through the door, closing it behind you, leaving intact the room with furniture, portraits, phone bills, and toys.”