The biriyani episode was a brilliant piece of imagination which I can use to start a literary career, film scripts, talk shows and so on. 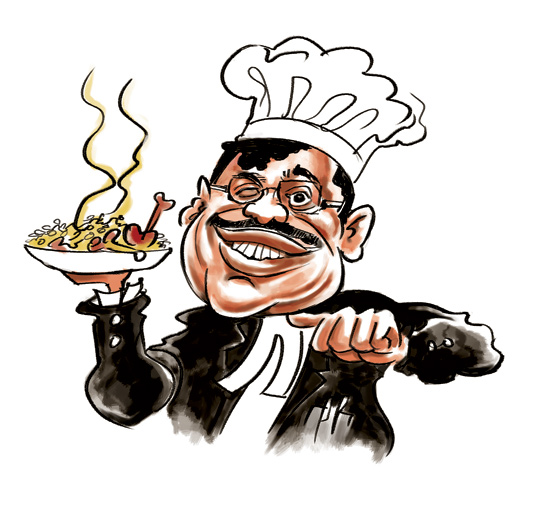 Honest, how I wish the founder of Amar Chitra Katha, Anant (‘Uncle’) Pai, were alive today. He would have made an illustrated story of the Amar Biriyani and it would have sold like hot cakes, if not hot biriyani! He would have invented a special kamadhenu to produce endless quantities of biriyani to strengthen the hands of the devas. All this was possible with a bit of imagination from the devas. It would have spiced up the Ajmal Kasab case which was being submerged and almost hijacked in an emotional wave launched by the do-gooders, human rights busybodies and wishy-washy weepies. I thought long and hard and the ‘mutton biriyani scenario’ took shape. Here was a guy who, after slaughtering dozens of people, was longing for mutton biriyani and the state of India was providing it! Wow!

The state government has asked for a clarification on the biriyani episode. How was it demanded, who cooked and served it to Kasab? Or was it all bunkum? I will be addressing the cabinet, senior bureaucrats, police personnel and later the media to dispel any misgivings. You see, the biriyani bomb diverted attention from the pro-Kasab tear-jerkers. Frankly, I never thought that people would be so gullible to believe the story. Revenue minister Eknath Khadse even urged the CM to probe my biriyani remarks. Why?  In fact, my remarks  came at the right time and the focus on mutton biriyani will divert public attention from the absence of beef and the problems faced by the people of Mumbai. In a way, it may even help the government to get over this controversy.

There are other aspects to the biriyani story. I realise I cannot be a prosecutor for ever. Shouldn’t I make plans for retirement? The biriyani episode was a brilliant piece of imagination (I never knew I had it in me!) which I can use to start a literary career, film scripts, talk shows and so on. The Ujwal brand mutton biriyani could bec­ome famous on Mohammad Ali Road and court premises and friends tell me I must take a patent on it. In fact, all this could lead to a rosy future for me. Senior prosecutor and then judgeship! Poor Kasab, he was the reason behind all this. Now I wish I had served him his favourite dish a couple of times before sending him away. Some of my jealous rivals in the profession are spreading rumours that the biriyani episode could boomerang on me, the argument being that “if he could bluff on the biriyani issue, he could do so on   vital prosecution facts as well”. Ha, that is pure envy. The law, and not mutton biriyani, will take its own course.