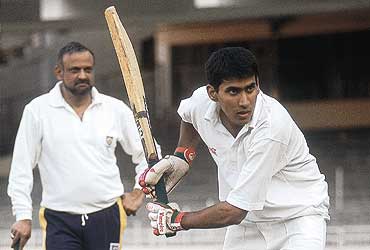 outlookindia.com
-0001-11-30T00:00:00+0553
Udit Patel, 17, batsman and off-spinner: "Udzy" picked up the basics at the academy run by father Brijesh Patel, and switched from medium pace to off-spin at his instance. Already in the Karnataka under-19 team, he did not make it into the India under-19, but swears this would help him work harder and secure a place for the next junior World Cup. He aims to get into the under-22 and Ranji teams next year and the Indian team later on. But he also plans to pursue a career in computer sciences/electronics.

At the Karnataka State Cricket Association, Udit has E.A.S. Prasanna and Raghuram Bhat coaching him in the finer points of off-spin, and little master G.R. Vishwanath has helped him refine the on-drive. Prasanna has taught him to use the crease, bowl variety off-spin and the leg-cutter that Saqlain Mushtaq describes as his doosra. He watches the batting of Tendulkar, Ricky Ponting, Steve Waugh and Jacques Kallis on TV, Patel Sr analysing their strokes, running between wickets and dismissals. "We spend some time discussing his performance in the morning and how he should go about in the next game," says Brijesh.

Adds mother Toral Patel, who teaches mathematics at a local school: "Udit did not play for one year (he took a break for the ICSE exams), but I am glad he's playing well now. I'm sure he'll do well in both studies and cricket. I keep track of all his scores." Says Prasanna: "He's showing improvement, but it's too early to speculate on his prospects. He must be coached in field placement and how to bowl to a set field."