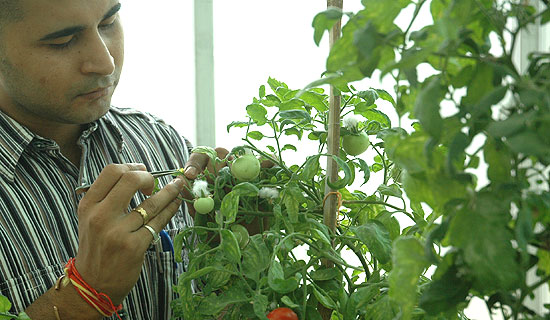 Genetic Crops: Foods In The Pipeline

We don’t know if they taste any different. But what we do know is they generate controversy and debate the world over—which will soon reverberate in India. That’s because the decision to go in for commercial cultivation of genetically modified (GM) foods (brinjal in this case) may come as early as the year-end. Until now, our exposure to GM foods—modified through transfer of genes across species to improve productivity—has been limited to cans of imported American corn and soybean products apart from edible oil sold without proper labelling. But this is the real thing: GM foods may soon land on our dinner table. Are we ready for it?

So far, apart from 15 varieties of Bt brinjal, limited trials of several other edible GM crops like maize, okra, cabbage, cauliflower, tomato and potato have been conducted in the country since 2004. The government has set a three-year target to introduce some GM vegetables like tomato, brinjal and cauliflower—subject to approvals. “The fact is the decision could be just a few months away,” says an agitated Kavitha Kuruganti of Punjab-based NGO Kheti Virasat Mission. The Genetic Engineering Approval Committee (geac), says Kuruganti, has set up a subcommittee to come to a decision on Bt brinjal developed by Mahyco (the Indian arm of the US seed major Monsanto).

Striving to reassure all that the matter is still only under consideration, Dr Rajini Warrier, director and member secretary of GEAC, under the ministry of environment and forests, says, “The subcommittee may take three to four months to give its recommendations to the GEAC as it has to go through voluminous documents on health and environment safety besides data of field trials at 11 locations.” The caution mirrors a clear divide among agriculture experts. Many feel we are going too slowly on the transgenic route to food security; others fear for the impact on India’s rich biodiversity and consumer health. There is added concern on how to protect the farmers’ right to own and reuse seeds, as the new technology seeds could carry patent rights of private companies.

“There is scientific evidence from the lab and case studies of livestock which show harm from GM crops.”
Jeffrey M. Smith, Executive Director, IRT

Environment minister Jairam Ramesh is among those willing to keep an open mind on the subject while retaining the element of caution. He is willing to enhance public funding for this technology. “There is no point depending on Monsanto and other private companies for pushing this technology. We need to develop indigenous varieties of GM crops like the Chinese,” says Jairam. Clarifying that he is “not totally against GM crops but would not like to proceed in haste,” the minister expresses keenness to hasten the legislation for setting up a biotechnology authority (suggested by the Dr M.S. Swaminathan panel) as it would help set up clear rules and protocol for carrying out “field experiments and risk assessments by independent professionals and scientific experts”.

Between 2002-08, GM cotton cultivation in the country has spread to about 80 per cent (or 7.6 million hectares) of the total acreage. India’s cotton production has doubled in this period, winning considerable official support for the GM route to enhancing productivity, but critics maintain it has come at a high cost. “Today in Vidarbha (a major cotton-growing region of Maharashtra), you cannot get any seeds of traditional varieties of cotton. It is not because farmers want it so but they are solely dependent on Mahyco for expensive seeds,” says Krishan Bir Chaudhary, president of Bharatiya Krishak Samaj. This dependence on MNCs is dangerous, feel experts, and would weaken India’s food security.

Upset that their concerns about public health and environment is not being taken seriously, many groups are studying the rise in allergies in humans—as well as the decline in fertility and milk yield of cattle due to GM cottonseed cake feed. This, they feel, is important as the Bt brinjal developed by Mahyco contains the same Cry1Ac gene as in Bt cotton. “There is considerable scientific evidence, both from laboratory studies and case studies of livestock, which present overwhelming irrefutable evidence of harm from GM crops,” warns Jeffrey M. Smith, executive director of US-based Institute for Responsible Technology and author of Seeds of Deception.

Proponents of the transgenic route say it improves crop productivity and staves off the impact of pests. “We are exploring the transgenic route to develop crop varieties that are resistant to drought, salinity, heat, water-logging, pests and fungus among other problems,” explains Mangala Rai, agriculture scientist and director general of ICAR. For instance, the Varanasi-based Indian Institute of Vegetable Research (IIVR) is in the process of developing transgenic tomatoes that are virus-resistant and in some cases even drought-resistant. Also in the works are transgenic cauliflower, gram and pulses in collaboration with other national research organisations.

“Where there is no resistance to be found in the plant kingdom to such problems, the transgenic method is being tried,” says Dr Mathura Rai, IIVR’s director. So, in the case of brinjal, the Bt gene will provide protection against shoot and fruit borer infestation, which renders upward of 30 per cent of the fruit unmarketable and also affects productivity. For Ramapati Yadav, brinjal grower in Adalpura village in the vicinity of IIVR, the choice is clear: “If the institute can find a solution to our problem, why will we not grow it? As it is, we inhale poison while constantly spraying pesticides to protect our crop.”

Unlike in the case of Bt cotton, the public-private partnership in Bt brinjal is expected to offer farmers alternatives to hybrids developed by Mahyco, which will require seed replacement every season. These are varieties being developed by three research institutes in the country—IIVR, Tamil Nadu Agriculture University, Coimbatore, and University of Agricultural Sciences, Dharwad—where farmers will be able to reuse the seeds. “From this year, the focus is on ensuring the biosafety of GM products developed in India and not just the agronomic performance per se of the hybrids developed,” says Bhagirath Choudhary of International Service for the Acquisition of Agri-biotech Applications (ISAAA).

This partnership between seed MNCs and research institutions has, however, failed to win over the critics. “The problem is we cannot say with confidence that nothing has happened with GM food crops in the US,” stresses P.M. Bhargava, the Supreme Court’s nominee on the GEAC, pointing to a rise in healthcare problems in the US. One of the pioneers of biotechnology in the country, Bhargava has recommended 29 safety tests before giving the green signal to any GM crop. Unfortunately, hardly four or five of these safety tests are being conducted. “We surely do not want the health of the entire nation to be put at risk for decades just so as to satisfy the greed of MNC seed companies,” Bhargava argues.

As India looks to meet the needs of hungry millions, the question remains: is food safety not as important as targets for improving productivity? ICAR’s Rai says, “There is no backtracking as far as exploring the transgenic route to food security is concerned.” But unlike a car or a drug that can be withdrawn if found defective, what are the options if the GM experiment goes haywire? Well, a pinch of caution won’t change the taste.