His marriages give the actor's campaign a rude jolt 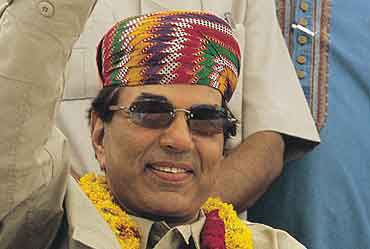 When filmstar Dharmendra married Hema Malini on August 21, 1979, in Mumbai according to Islamic law, he was not to divine that more than two decades later he'd be contesting Lok Sabha elections from Bikaner in Rajasthan as the BJP candidate. Now, he may well rue the decision as documents show that Dharmendra changed his name and religion to marry Hema Malini, currently BJP Rajya Sabha MP, but failed to mention it in the affidavit submitted on oath to the returning officer. Hema too changed her name, as per Islamic law.

Outlook obtained a copy of the nikahnama or marriage certificate that shows one Dilawar Khan Kewal Krishna accepting Ayesha Bi or Hema Malini as his legally wedded wife. But in the affidavit submitted to the returning officer of Bikaner, the actor has put in his full name as Deol Dharmendra Kewal Krishna. This when the nikahnama confirms the actor's assumed name and address. Both the nikahnama and the affidavit before the returning officer state his address as Plot number 22, Road Number 11 J.V.P.D. Scheme, Juhu, Mumbai—400049. The nikahnama also carries details of the maulvi and eyewitnesses present on the occasion. A mehr of Rs 1,11,000 too is shown to have been finalised between the two parties as the agreement for the nikah. The nikahnama—which is part of the two petitions submitted before the Election Commission and the sessions court, Indore—has pleaded for the annulment of Dharmendra's candidature from Bikaner, charging him under Sections 420 (cheating), infringement of the Hindu Marriage Act and Islamic Shariat law.

The Congress is making the most of this political weapon. Both petitioners are Congressmen: Akhtar Beg being the Madhya Pradesh Congress minority cell leader and K.K. Mishra a member of the Indore district Congress. Rajasthan Congress leader Nawal Kishore Sharma has already said that providing wrong or inaccurate information in the nomination form is a clear violation of election laws. The two petitioners have submitted that the actors got married under Islamic law and have wilfully concealed facts from authorities. They say that since Dharmendra's first wife Prakash Kaur is still alive, he has without divorcing her not just married another woman but also changed his religion to do so.

Beg told Outlook, "It is a fraud of the highest order that Hema Malini too has concealed her name in her Rajya Sabha form," In their petitions, both Mishra and Beg have raised objections to Dharmendra's affidavit before the returning officer which they say has conveniently not mentioned his wife's name under the relevant column. "Thereby hangs a tale which the court and the EC can take note of. If action can be initiated against Lalji Tandon for violating the model code of conduct, the case against Dharmendra is even stronger," says Beg. The petitioners also allege that the two again got married according to Iyengar rites in Chennai on May 2, 1980.

In an interview to Outlook last week, Dharmendra had categorically denied he had changed his religion. "This allegation is totally incorrect. I am not the kind of man who will change his religion to suit his interests." When asked about the Congress charges, he had asserted: "If there is any truth in this charge, let someone prove it with evidence. If this a lie, let the public decide." The actor dismisses the whole controversy as an attempt to disrupt his highly successful campaign.

Dharmendra indeed has been drawing big crowds, going by media reports, particularly in the Jat-dominated areas of the constituency. But with the Congress working overtime to dig up on his past, the actor will have a tough time directing the future course of his fledgling political career should that charge be upheld.

Hema Malini, wisely, has kept Bikaner off her schedule, even though she has toured Jaipur.When confronted with reporters' queries in Guwahati, however, she said the issue seemed the handiwork of a frustrated opposition. "Since they have no issue to talk about, they have descended to these levels. I am sure Dharamji will come out of it clean and the controversy will die a natural death."

The controversy hasn't stopped Bikaner returning officer Lalit Kothari from accepting the actor's nomination. Says he, "Since the nomination met all the basic requirements, it has been accepted. There is no question of re-examination." So, it's the courts for the petitioners.

The move has caused ripples in the Rajasthan BJP whose leaders are smarting under what they call a personal vilification campaign to damage their party's prospects. Says state BJP vice-president, Chandraraj Singhvi, "The Congress is so desperate that it has started levelling personal allegations. Not that it is going to work." But it is causing some embarrassment, particularly as Hema Malini is repeatedly asked to offer comments on the subject at meetings and press conferences she attends. She seems to be holding up well, but things could be different if the court does take cognisance of such an offence. The outcome will affect not just the dramatis personae but also the party they represent. And that is certainly not what the BJP intended when it roped in Veeru and Basanti for their cause.

K.S. Shaini In Bhopal And Kapil Bhatt in Jaipur