Two Totems And A Taboo 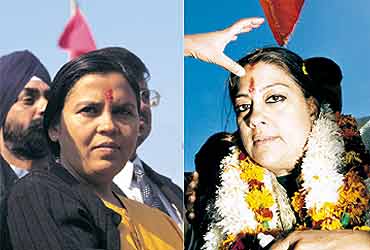 outlookindia.com
-0001-11-30T00:00:00+0553
A rich, blue-blooded princess and a self-proclaimed saffron sanyasin—Vasundhararaje Scindia and Uma Bharati are bound by a physical commonality. At rallies, they have to stand on a stool to reach the microphone. In the rough and tumble of the Hindi belt, they also share the predicament of being women at the helm of a world of masculine politics. On their shoulders rest the the BJP's fortunes in the make-or-break assembly polls due in Congress-ruled Rajasthan and MP later this year.

Despite the varying degrees of puritan Hindutva that attaches to their politics, a certain aura of glamour surrounds the public personae of the two women heirs to a political legacy. Both have been in the Union cabinet and are five-term MPs who have been paradropped into their states by the BJP high command. Both have had to grapple with sullen, resentful state leaders, mostly men, who've been sidelined.

The similarities, however, end there. Vasundhararaje, 50, is a princess from the powerful and fabulously rich Gwalior royal family. Uma, 44, a class six dropout and a backward caste "child prodigy" who apparently knew the Ram Katha by heart, has come up the hard way.

But there's a thread that unites their personal histories. It was Vasundhararaje's mother, the late Rajmata Vijayaraje Scindia—one of the biggest financiers of the BJP—who spotted Uma Bharati as a child, reciting religious sermons in the erstwhile princely state of Gwalior. The Rajmata's patronage gave her the needed push to begin her political journey.

If she does trounce chief minister Digvijay Singh, Uma Bharati will have completed the transformation of her image from a rabble-rousing sanyasin to a serious mainstream politician. The problem, she admits, is that people keep harping on Hindutva. "I keep saying Hindutva is not an election issue for us. Water, electricity, roads and development are," she told Outlook. Yet, with Uma Bharati, there's always an element of inconsistency. "Cow slaughter can also become a big issue in MP," she warns, alleging that the CM isn't implementing the ban on it "to appease certain communities".

A powerful orator and a spontaneous crowd-puller, Uma Bharati, by virtue of being a Lodh, has been able to play the obc card rather well. BJP general secretary Pramod Mahajan, in charge of all the forthcoming election campaigns, describes her as a "genuine mass leader". But political observers in the state warn that there are many people who don't take her seriously. And some of the sceptics are in her own party. They complain of her whimsical and moody character. Says a BJP MLA: "The high command should have selected someone with a more serious image to take on master manipulator Digvijay."

The resentment, though, can't be said to have reached the stage of an open revolt. Says Mahajan: "The MP unit has always had factions. Too much shouldn't be made out of it." But Uma Bharati herself admits she has been expending considerable energy on smoothing ruffled egos. She's being projected as the chief ministerial candidate, but it may not be smooth sailing for her. State BJP chief Kailash Joshi describes Uma as charismatic and young, but remains pointedly silent when asked about her managerial and administrative skills.

Indeed, BJP leaders worry that in the event of a close contest, it is Digvijay's managerial skills that may tilt the balance in the Congress' favour. A recent internal survey commissioned by the BJP in all the states going to the polls has only added to its anxiety. The survey predicts the BJP is way behind the Congress in Delhi and Chhattisgarh, has a clear lead only in Rajasthan and is in a close contest in MP. In fact, even in the 1998 assembly polls, the Congress voteshare in MP was just 1.2 per cent higher than the BJP's.That's why Uma believes that "if I go from house to house and beg people to vote for us, we'll make it this time".

That apart, BJP leaders are also silently praying for a fourth consecutive year of drought in both MP and Rajasthan.

Incidentally, the BJP is more certain of a victory in Rajasthan; that is why the resentment against Vasundhararaje is more intense. She is seen by many state leaders as the "puppet protege" of former CM Bhairon Singh Shekhawat, now vice-president of India. Raghuveer Singh Kaushal, the BJP MP from Kota, among others, has openly accused her of accommodating only one faction of the party.

Vasundhararaje has hit back by excluding heavyweights like Hari Shankar Bhabhra and Ghanshyam Tewari from her newly-formed state executive. The veteran BJP national treasurer, Ramdas Agarwal, believed to have had chief ministerial ambitions, has given up his charge of Rajasthan because of differences with Vasundhararaje. Though he refuses to comment on the decision to project her as the chief ministerial candidate, Agarwal told Outlook: "If she's serious, she should go to the field more frequently."

Vasundhararaje shrugs off charges of inaccessibility as a case of "reverse snobbery". She argues that she has been winning consistently from a backward constituency like Jhalawar. Says she: "I'm the new girl in town and can't become pals with everyone and win a popularity contest overnight.... But I'm doing everything possible to carry everyone along."

Even Agarwal agrees that differences won't amount to internal sabotage. "This is the BJP, not the Congress. In the end, we will all work for the same cause," he says. Observers believe in feudal Rajasthan many leaders are uncomfortable at being led by a woman. There's also a debate over whether royal antecedents are actually an advantage. But Vasundhararaje isn't worried. She is the only MP from Rajasthan to have won five consecutive terms. "I don't make a big deal of my family background. Others do," she says.

Like Uma Bharati, Vasundhararaje too insists the big election issue is development, not Hindutva. But the VHP's sectarian campaign in Rajasthan indicates the BJP's electoral script includes a heavy dose of Hindutva. Vasundhararaje, though, says: "Gujarat can't be repeated here. The social set-up is different."

On April 27, Vasundhararaje will begin a 65-day 'parivartan rath yatra' across Rajasthan. Says she: "After they see me travel in the heat of May and June, the critics will hopefully stop accusing me of living in an ivory tower."

Uma Bharati set off on her 'sankalp yatra' on April 16. And by the time monsoons come, both would have criss-crossed their states. The princess and the sanyasin are taking the same route to power. Politics is, clearly, a great leveller.