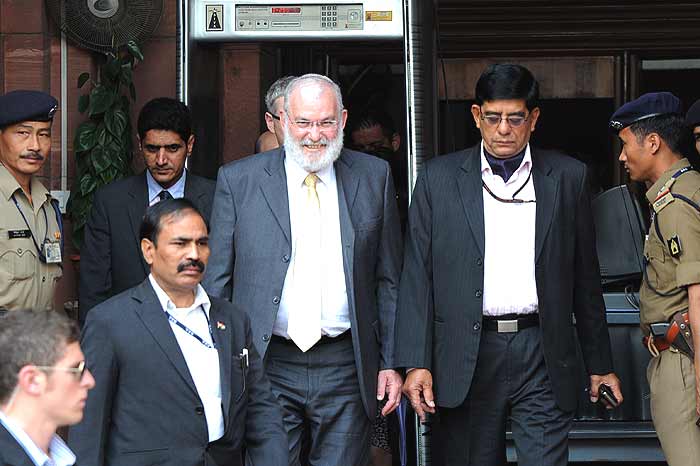 Why Iran Is Important

Why Israel Is Important

Dealing with Israel and Iran—belligerents who are daggers drawn over issues old and new—and pursuing “strategic partnerships” with both, has never been easy for India. Since last month’s terror attack on an Israeli official’s car in Delhi, which the Israelis believe to be the handiwork of the Iranians, India has been walking the diplomatic tightrope. But the recent arrest of Syed Mohammed Ahmed Kazmi, an Indian journalist working for the Iranian national news agency IRNA, and arrest warrants issued against three Iranians, who’d visited Delhi at the time, for their involvement in the attack, has complicated matters further for the Indian foreign policy establishment.

On Thursday evening, members of the investigating team briefed senior MEA officials about their findings—obviously, everyone is keenly aware of the possible diplomatic ramifications. “It definitely introduces a wrinkle in our relations with Iran and can slow down our engagement with Tehran,” says former Indian foreign secretary Kanwal Sibal.

“Iran has shown weaknesses in handling crises, and that has a lot to do with its own fractured domestic politics.”
Arshin Adib-Moghaddam, West Asia expert

But to what extent it damages Indo-Iranian relations is a question South Block mandarins are finding hard to answer. For one, just because the alleged perpetrators were said to be Iranian nationals does not automatically establish the complicity of the establishment in Tehran. Limpet explosives that were used in Delhi were also used to assassinate a number of Iranian nuclear scientists. The fact that Tehran has accused Israel of using “Iranian proxies” to carry out those killings complicates the easy conclusion that any Iranian national’s involvement in the Delhi attack automatically establishes Iran’s complicity.

The MEA’s cautious approach, in the light of these complexities, is understandable. However, this is not to say that Iran has been taken off the list of suspects; rather, it puts back the onus on the leadership in Tehran to convince New Delhi that it had nothing to do with it.

“The current Iranian government has shown serious weaknesses in its handling of crisis situations and that has a lot to do with the fractured domestic politics in the country,” says Arshin Adib-Moghaddam, author of A Meta History of the Clash Of Civilizations, who teaches in SOAS, London. “But close relations with India have been pivotal to the Iranian state, and any deterioration will be seen with serious concern,” he adds.

“Developments in the case bring a wrinkle in our relations with Iran, and can slow down our engagement with Tehran.”
Kanwal Sibal, Former foreign secretary

True, India has been one of the few countries that, despite its reservations on Iran’s nuclear programme, has refused to side with the US and its western allies to isolate Tehran. New Delhi has publicly backed its policy—that it will continue to buy Iranian crude—despite attempts by the US and the EU to tamp down on Iranian oil and gas trade. Iran is also crucial to India for access to Afghanistan and Central Asia.

What precludes an easy Indo-Iranian compact even more, however, is India’s extremely important ties with Israel. The two are not only strategic partners but with each passing day their cooperation has been expanding from the field of defence, security and intelligence-sharing to agriculture, hi-tech, tourism and food security. For Israel, India is a crucial market; for India, Israel remains a valuable partner with which it can develop joint projects on various sectors.

In addition, the West Asian region is of immense strategic importance to India. Other than being its main source for energy, nearly six million Indians live and work there. The remittance of over $20 billion that flows in every year not only helps in taking care of a substantial portion of India’s oil bill, it also helps run a number of families across the country. Peace and stability in the region is of vital importance to India—any sign of unrest has a negative impact on the supply of oil, causing energy prices to soar, and making it difficult for India to maintain its current rate of growth.

“Nobody in Israel will be surprised to hear that Iran was behind the attack, and no one will be suprised if it wasn’t.”
Tom Segev, Historian, commentator

The attack on the Israeli official and subsequent developments, including Kazmi’s arrest, has attracted wide media coverage. In both Israel and Iran, where its ramifications are better understood, every single detail of the case has been followed with keen interest. Unlike Iran, which has largely maintained a stoic silence, Israel has been vocal in blaming the attack squarely on Iran. The ongoing investigation was among the issues that Israeli national security advisor Yaakov Amidror discussed with Indian leaders during his recent visit to Delhi. “We are happy with the investigations and the professional manner in which they are being conducted,” an Israeli government source said after the meetings, while not forgetting to add that “the direction of the findings of the investigations is also very clear”.

But others see the Delhi attack case as a side-story to the bigger one that is being enacted in West Asia under angry war clouds. Israel has been threatening to use unilateral military action to stop Iran from pursuing its nuclear programme, rejecting Iran’s rationalisation that it is for peaceful purposes. Segev says there is a lively debate on the issue, but points out that most Israelis are of the view that rather than Israel, it will be better if the Americans take the initiative to stop Iran from going nuclear.

But why is the Israel-Iran showdown being played out in the Indian theatre?

Adib-Moghaddam reasons the Netanyahu government in Israel is spoiling for a war with Iran, though this idea has been rebuffed by the US and the EU, who aren’t keen on a war in West Asia at this juncture. “The Israelis are aware that terrorism charges weigh heavily and that this could be used as a casus belli to sell another war,” argues Adib-Moghaddam. In short, there’s a less simple causative link that can be drawn between the attack in Delhi and West Asian politics. India may be aware of all this but will be careful before deciding who to blame for bringing the crisis on its soil. A conflict there can singe it badly.