Two Cars And An Express

The newspaper magnate revealed in all his glorious eccentricities, warts and all 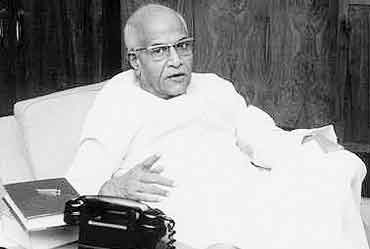 Warrior Of The Fourth Estate: Ramnath Goenka Of The Express
By B.G. Verghese
Viking/Penguin Pages: 360; Rs 450
Ramnath Goenka had two cars parked in the rat-infested alley behind the Express Building on Bahadur Shah Zafar Marg. A Fiat of early ’70s vintage which B.G. Verghese mentions in his excellent biography of the newspaper baron, Warrior of the Fourth Estate, was the one RNG drove himself.

Often, his companion on the front seat was one of his editors or reporters being driven at dusk to the temple opposite the Red Fort where RNG would disappear into the sanctum sanctorum with swift, short paces and reappear, within minutes, with a vermilion tika on his forehead.

In all sorts of trouble with the government for having built far in excess of permissible limits, he turned to Nanaji Deshmukh and winked. "Once this storm subsides, I will build another floor!"

Nanaji was one of the numerous passengers of eminence on that historic Fiat which should be located and restored as a collector’s item. I suspect that the project to resurrect Jayaprakash Narayan as a counterpoint to Indira Gandhi (to arrest her leftward tilt) was conceived in this car, with RNG at the steering wheel.

The other car was more stately, a Studebaker of the ’60s, the one you’d associate with Audrey Hepburn and William Holden except it was upholstered with thick, white khadi matching his own khadi trousers and Jodhpur jacket. Chauffeur-driven, RNG acquired a more formal persona being driven, for instance, to the residence of Prime Minister Morarji Desai with the specific purpose of introducing to ‘Morarji bhai’ the new special correspondent he had handpicked to cover the pmo. Editor-in-chief S. Mulgaokar, Editor Ajit Bhattacharjea, Editor, Express News Service, Kuldip Nayar—all had been bypassed in making the appointment: in a jiffy, on the spot, at the residence of Radhakrishna of the Gandhi Peace Foundation on Rouse Avenue.

Morarji sat on a sofa, a low wide table to his left, decorated with dozens of jars filled with nuts, powders, herbs, looking like an apothecary’s counter.

RNG took off his shoes and, approaching Morarji, went down on his knees, then straightened himself horizontally in a full-blooded Vaishnavite salute. Then, to Morarji, tapping me on the shoulder—"He will look after the pmo: that should be all right, that should be all right." He then asked me to leave the room and asked "Tonpe", Morarji’s trusted secretary, to look after me. This was my first, fleeting rub with prime ministerial power.

RNG had all the contradictions of great men. He could be magnanimous to a fault (the way he indulged Mulgaokar); he could, without any trace of guilt, also be mean—as he was with some of his low-paid stringers. One day he came rushing out of Hick’s bungalow in Chennai screaming that the Kakinada correspondent should be sacked because he was "more expensive than Kissinger".

This needed some decoding. It turned out that stories had appeared in newspapers that Henry Kissinger was, in those days, charging the equivalent of hundreds of rupees for every word he wrote. The Kakinada correspondent was being paid Rs 300 per month as retainer and for several months he had not filed a word. In RNG’s framework, he was outpricing Kissinger!

For energy, drive, hard work, range of friends at the highest levels, incredible recall, commitment to causes, he was peerless. He had all the time in the world for Gandhians. Simultaneously, he was full of stories on Gandhian humbug, their ostentatious austerities.

Verghese has collected all the relevant material on this remarkable, mercurial, predictably right-wing newspaper baron, the creator of the country’s biggest newspaper chain, who took Indira Gandhi head on to create spaces between the Congress Syndicate and the rss. The installation of the Janata Party government in 1977 was his moment of glory, but with the return of Indira Gandhi in 1980, RNG had to make adjustments with the iron lady. But he had no real heart in it. It was the handiwork of his daughter-in-law Saroj Goenka and the late Mohammad Yunus. They established the first contacts and persuaded RNG that a newspaper could support a formation like the Janata Party but, in the event of its defeat at the hustings, could not become a substitute for that party.

'I've Been Given Assurances By BJP Leaders'