A Right to Information Bill is out there, in some states at least. But the babus are still masters. 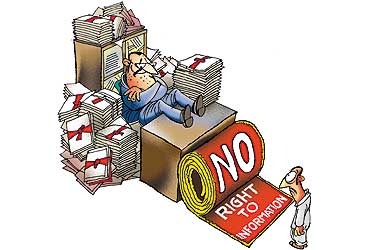 Seventy-five-year-old Jagat Singh has been making the rounds of his old government office for a number of years now trying to find the status of his pension arrears, only to be told every time that his "file is moving" and he would get all his dues shortly.

In another small town, Motibai put in an application to transfer her house to her own name three years ago. The file's still moving.

After a bridge collapsed in a UP village, local authorities were approached to find when it was last checked. The file's "mobile", they assured.

Is help at hand for these people and the millions of hapless others, routinely given the endless run-around in government offices? Theoretically, yes, with the Right to Information Bill—already passed in eight states—seeking to give people the right to know what's going on; the status of not only their own cases, but anything that affects the public at large.

In India, people's right to information has been severely restricted by a colonial culture of secrecy under which public bodies are still run as masters with the people as subjects. Added to this, outdated laws like the Official Secrets Act and certain provisions in other enactments such as the Indian Evidence Act and the Central Civil Servants Code of Conduct Rules have made it difficult for citizens to obtain any information about the government's work. This, even as the right to information is a critical instrument to minimise government corruption and inefficiency. Says veteran consumer rights activist H.D. Shourie who drafted the Central Freedom of Information Bill (currently in cold storage): "It's time that the individual is recognised as an individual and not as part of an anonymous mass. People should have a right to know the basis of every decision that the government takes."

Right-to-information laws were enacted first by Tamil Nadu and Goa in 1997. Late last year, Delhi made it applicable to 119 departments. In Rajasthan, it's applicable in about 25 departments. In UP, it has been introduced as an official Code of Practice in place of an Act. Other states that have enacted the legislation are Maharashtra, Karnataka and Madhya Pradesh.

The information the citizen has a right to now could be in the form of records, files, registers, maps, data or drawings. According to the Acts, which are about the same in all the states, anyone can seek information from a government department by filling up a form and paying a fee of Rs 50. The department is then obliged to give him a date when the information will be provided to him. In most states, this has to be done within 30 working days, failing which the department will have to pay a fine which rises with every additional delayed day.

The seeds of the right to information movement were sown by the Mazdoor Kisan Shakti Sangathan (MKSS) in Rajasthan in 1990, where a group fighting for minimum wages for landless farmers found that official records were being routinely fudged. The demand to see the records were met with refusal as they were considered "secret". But the group took this as a democratic and political right to the people as against a favour done by officials at their discretion. The movement has now formalised the right to information as a fundamental right in the state.

At the national level, the first major draft of the bill was circulated by the Press Council of India in 1996, based on one prepared by the Lal Bahadur Shastri National Academy of Administration, Mussoorie. A detailed draft was also prepared by the Consumer Education Research Council. It was introduced as a private member's bill in Parliament, but never taken up for discussion. In 1997, the government appointed a working group headed by H.D. Shourie to prepare a draft legislation on freedom of information.Due to quick changes in government, it was only in July 2000 that it was introduced, with some changes, in Parliament as the Freedom of Information Bill, 2000. Later, it was referred to a parliamentary standing committee on home affairs in January 2001. Though the committee submitted its report a few months later, the files haven't moved since then.

Experts feel that even the newly formulated Acts have several loopholes to enable officials to dodge people's queries. Says an activist: "The state Acts have between six and 22 exceptions under which officials can refuse information, like strategic and security reasons. Even the proposed Central bill provides for eight exceptions. And some of these, especially 'public interest', can be interpreted in a lot of ways."

It is no surprise then that the most tooth-and-nail opposition to the bills has come from bureaucrats. Says Abha Singhal Joshi, lawyer and activist: "Many bureaucrats are scared they will lose their power if this becomes a reality." Agrees Shourie: "Our bureaucrats have lived in a secretive and protected environment for ages. They have to realise that times have changed and that they are under the gaze of the people and obliged to give them the information they want."

According to sources, while one Delhi bureaucrat argued that the right to information could be misused by people with mala fide intentions, another felt that this will make it difficult for officials to take free and fair decisions! One opined that each application for information should have the applicant's photograph and a copy of his ration card. Yet another felt that the granting of this right would lead to long queues outside government departments, hampering work.

So now that so many states have written the right into law, have the queues started their serpentine tracks outside government offices? Not really. Despite chief ministers taking an interest in implementing the Acts—Delhi CM Sheila Dikshit has set up a state council to supervise implementation—in many offices and government departments where the Acts are supposed to be implemented, it's business as usual. Indeed, most officials are even ignorant about the Act's existence.

Outlook's attempts at submitting query forms in several departments of the Delhi government were refused by officials who said they had never heard of such a thing. These included the Municipal Corporation of Delhi (MCD), the Delhi State Industrial Development Corporation (DSIDC) and the Delhi Vidyut Board (DVB).

It looks like it will need a paradigm shift in India's obstinate bureaucracy till the right to information truly becomes a right and not just another meaningless entry in our lawbooks.