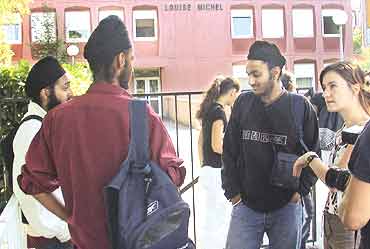 outlookindia.com
-0001-11-30T00:00:00+0553
Drive down the streets of Bobigny, an eastern suburb of Paris, and you'll come across Lycee Louise Michel. At the gate of this school, you'll find three Sikh lads standing all day long, staging a satyagraha against the Law of Secularism (la loi sur la laicite) which prohibits state-funded educational institutions from admitting students displaying religious symbols—scarves, turbans and the like. The new law came into force on September 2, the first day of the new academic year in France.

When the three Sikh students—Dharmveer Singh, Jasvir Singh and Bikramjit Singh—reached Louise Michel, they were aghast to hear the principal order them out for sporting the turban. His decision belied the previous assurances he and other French authorities had held out to them—that the new law wasn't to apply to Sikh students. "Until the school acquiesces, we will stand at the gate every day," says Bikramjit. "No Sikh can walk without his head covered."

The school cites opposition from the teachers' union and some students to justify the action. The Sikh students counter, saying neither their classmates nor teachers endorse the exclusion. "Perhaps," says Jasvir, "some teachers objected to our turbans. But they don't teach us, we would not have come in contact with them."

Estimated to number between 5,000 and 25,000 countrywide, most Sikhs in Paris live in the town of Bobigny. The schools here fall under the jurisdiction of the director of education for Creteil, Jean Charles Ringard. It seems he and others in the education ministry had assured the Sikhs that the new law would not apply to them. "Even a day before September 2, I was told by the authorities that my kids could go to school wearing turbans," says restaurateur Parmjit Singh.

September 2 shocked Parmjit, as it has most others in the community. His elder son, 15, was asked to remove the turban and was turned away from the Mozart School in Blanc Mesnil when he refused. His younger son, 7, was luckier: he was admitted because he uses a handkerchief instead of a turban. But as Parmjit says, "The principal has told us that should any student protest, my boy will have to remove the handkerchief."

The education authorities themselves are exasperated, helpless against the powerful teachers' union. Ringard, for instance, has been tirelessly campaigning with schools in Creteil not to disallow students wearing the turban. All but three schools agreed to heed his pleas. Ironically, the three schools were precisely those where Sikhs study. Ringard then proposed to transfer the students to schools prepared to admit them.

Sikh elders, however, say Ringard's proposal is no solution. For one, the proposed schools are 50-60 km away. Second, there's no guarantee that the new school would not reject them at a later date. "This is what happened to one student," says Gurdial Singh, a prominent businessman. "He was transferred to a new school but it has now turned him away. The authorities are now looking for a third school."

A sense of despair prevails among the Sikhs. Last week, the local Bobigny gurudwara held a meeting to discuss the issue. The mood was defiant; most speakers emphasised the importance of turban and patka and urged the community not to succumb. Says Kashmir Singh, a member of the gurudwara managing committee, "We know our children's future is at stake. So, instead of wearing the turban, they can wear the patka or a small cloth to cover their hair. But under no circumstances will they go bareheaded to school." Even the children present at the meeting agreed. Says Bikramjit, "It does not matter if I lose a year. At least future generations won't have to fight this battle."

And fight the Sikhs will, through protests and appeals to court.Says Chain Singh, another member of the managing committee of the Bobigny gurudwara, "We'll again take to the streets to make our demands heard. If we fail, we'll consider options like sending our children to neighbouring countries for education. It's preferable to leave France than leave the turban."