Tune Into This, FM

What should the finance minister's priorities be for the New Year? Politicians, economists, businessmen or journalists, they all all have a bit of advice for our FM. 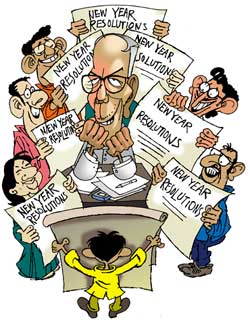 outlookindia.com
-0001-11-30T00:00:00+0553
The worst thing about being an administrator is that one is swamped by unsolicited advice. With Yashwant Sinha, it's a private agony inseparable from his high-profile public job, since, as the nation's finance manager, he is forced to ceremoniously seek suggestions from all and sundry before he hammers out an earning-spending plan for the next fiscal year.

At Outlook, we should be looking a bit shame-faced about it since, through our columns, we also indulge in a bit of advising. As a result, we honestly think that the following could well feature topmost in the list of Sinha's new year resolutions: "No more handy hints"! That brings us to the second probable resolution in that list—could it be, er, "bye, bye, North Block"!

Well, we don't know and Sinha isn't telling. As an expert we contacted put it: "I'm not in the business of advising the FM and I can proudly state that I'm in no way responsible for his decisions." Since we aren't privileged enough to say so, we did the next best thing: talked to experts to take a guess at the Finance Minister's resolutions for the first year of the new millennium.

We came up with a mixed bag. They ranged from the downright unkind: "He should quit the finance ministry", to the classical pink remedy for everything: "Increase taxes on the affluent to bridge the budget deficit", to the absolutely quirky: "Send the prime minister abroad every month to speed up reforms". Come to think of it, the last one is not such a bad idea after all!

And what about the commoner? What would be his idea of a new year charter? Would he ask for an advisory council packed with commoners—a housewife, a hawker, a paan-bidi shopowner, a student, and so on? Or would he repeat the usual—bring down prices, create more jobs, make housing cheaper... Yes, all that, and most important, much more work and action, instead of talks and debates and those unending bickerings in Parliament!

Nothing will write our nation's future as education. Hence, my first resolution is to improve the quality and quantity of education. That means three things: I'd make the schools accountable to the communities rather than the education bureaucracy. I'll gradually raise the investment in education by one percentage point of gdp per year up to 6 per cent. And I'll make the curriculum relevant to our needs. I'll be uncompromising in downsizing government, cutting subsidies, and privatisation. A healthy fiscal will offer us the bonus of lower interest rates.

Agriculture is one of the few areas where we have competitive advantage. I will liberalise the movement of commodities, both domestically and externally. I'll encourage the "second green revolution" by adopting the new miracle seeds. I'll allow farmers to lease their lands on a long-term basis, which will encourage professionalisation of agriculture and transfer of capital from urban to rural areas.

I'll keep my promise by bringing a national vat from April 1 and make India a true common market.

His resolution should be to promote swadeshi within or outside the budget. We have had enough of mncs in the country. He should not ban them but allow them only in areas where we lack expertise, like automobiles. But why should they come in clothes or bhujia or shaving cream. This has killed companies like Lakme.He should put his own swadeshi feeling over and above all other considerations. He should protect the Indian identity. Is saal swadeshi bhavana sarvopari honi chahiye. Aaine me apne aapko dekh key Bharatiya lagna chahiye (This year, swadeshi feeling should be supreme. We should be able to look in the mirror and see ourselves as Indians).
Bibek Debroy
Director, Rajiv Gandhi Foundation

I don't think Yashwant Sinha should have any New Year's resolutions at all, other than one of going off to Jharkhand instead. For,the budget this year will most likely only be numbers, no policy statements.

Better still, he should have a wish that the Prime Minister goes off to the US once every month. Then we will have reforms every month.

I hope his resolution is to present a budget that puts India on a sustained high growth trajectory and removes the physical, social and financial infrastructure constraints to such growth. This requires building a national consensus on privatisation, curbing the fiscal deficit, reducing non-plan spending and widening the tax net. I also hope that his resolution is to make this a year of implementation.

Our FM has undoubtedly been the most IT-friendly minister. Now he should make IT for the masses, by making computers, software etc cheaper for the country. Also, he should not worry about the stockmarkets but concentrate on improving the physical and telecom infrastructure. This means he should resolve to implement disinvestment and earn Rs 200,000 crore.

There is only one thing: As I have been saying for the last 30 years, we should get rid of managed interest rates. And, we should have more action and less talk on privatisation.

The first key thing—speeding up disinvestment. The resources freed from a total and complete disinvestment should then be invested where required most—education, both primary and secondary, infrastructure—power, health and roads. This will send the right signals to the markets and investors.

Third, the liberalisation of the telecom sector should be taken forward. Voice transfer should be legalised.

As for the IT industry, I think the government has helped slow down domestic growth by giving support to export-oriented software units. It should encourage investment in IT and use it for its governance, so that the domestic industry picks up steam.

He should start putting solid strategic intent on infrastructure. We cannot take this country into the 21st century by satellite. Our infrastructure stinks, our cities are dying and it's time we realised that things on the ground have to be improve. This means roads, ports, airlines, power and garbage collection—and they all need to be privatised.We'll take care of software exports, let the government take care of infrastructure.

Second, financial sector reform should be speeded up. There are psu banks with npas higher than their net worth. This must simply end.

In the IT sector, the software technology parks need to be corporatised and it will give a great boost to this industry.

Finally, we need to start investing in education. The middle class is unaware of this problem simply because everyone's child is in a private school, but the productivity numbers in the long term will not come from this segment alone.

Sinha's New Year resolution would possibly be to follow the orders of his masters fully and more loyally. But what he should do ideally is to for once, make up his mind on what is the right thing to do in taking the reforms forward.

The FM should make a resolution that he will solve industry's problems. And do whatever it takes to give a leg-up to the infrastructure sector. Till date, the real fillip has not been given to this sector.

He should stimulate the manufacturing sector. For this, he could think in terms of a cut in interest rates and a reduction in power tariff for industry. He should also try and ensure putting in place a strong anti-dumping mechanism.

The issues before him are far too serious for him to relax this year. 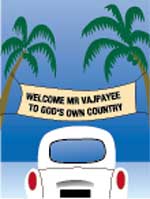