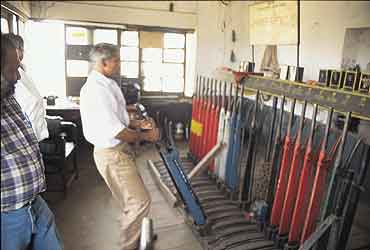 outlookindia.com
-0001-11-30T00:00:00+0553
It's not just class C and D jobs in the railways, there has been a long-standing demand for 100 per cent reservation in all lower grade jobs for local candidates in all central and semi-central offices in the Northeast. The trouble, however, is that successive governments have refused to create jobs in this underdeveloped region. They have not even tried to accommodate the locals even when big employers like the railways need them.

The Union cabinet had cleared 76,000 jobs in the railways nationwide, of which the first lot of 20,000 recruitments was to be made this year. These were mostly group D jobs: helpers, trackmen, gangmen-level posts. The minimum qualification for this group is Class 10, the salary Rs 1,200 per month. Group C category jobs include assistant station masters, drivers, motormen, guards, signal and mechanical inspectors. Applicants in this group have to be graduates.

Candidates in both categories are selected by the Railway Recruitment Board through a written exam. In the Northeast Frontier zone, for which an exam was supposed to be held in Guwahati on November 9, there were 2,575 group D posts of trackmen (gangmen) and 145 other C category posts.

Railway ministry officials estimate over five lakh people to have applied for these 2,720 posts. "We don't need very well-qualified people for these jobs. But even MBAs and engineers applied. The situation is bad all over the country but we are bound by a Supreme Court direction to have an all-India examination," explains a railway official.

But with political leaders like Laloo openly supporting the demand for local reservation for group C and D posts, it is hardly likely to be ignored.