Trash Of The Fortnight 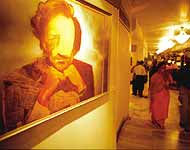 Art for cafe’s sake? In its mission to make Delhi’s Ashok Hotel even more of a happening place after Ssteel and a couple of new restaurants opened there, the itdc launched its Capital Art Cafe last week. In a long passage dotted with shops just off the lobby, this new watering hole for the "aesthetes" has paintings adorning every possible bit of wall space. And on the opening night, the ptps (page three personas) twittered on about what a lovely idea it was to take art to the people. Alas, it looked more like Sunday painters hanging up their wares on a street square in a small provincial town in Europe. Big names were on the menu: Satish Gujral, who inaugurated the cafe, Subroto Kundu, Veer Munshi, Naresh Kapuria and Rajeev Lochan were among the artists whose paintings were on show. Most of the works, however, were so deja vu that they looked positively stale, to say the least. Not so much a feast for the eyes but a recipe for indigestion.