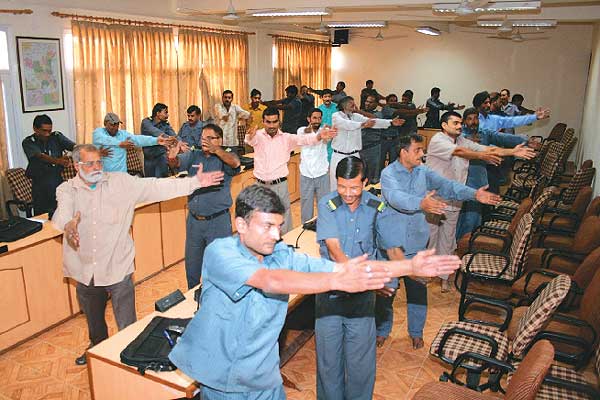 The teacher stalks up and down the front row of the class. “Tanaav ka kuch kaaran bataiye”—please list the causes of stress— she says, in a voice ringing with authority. “Long hours? Pressure from family? Alcohol abuse? What makes you tense?” she hurls the questions in Hindi, pausing before a man with vividly hennaed hair, and examines his notes gravely. Someone at safe wisecracking distance from the back of the class whispers a loud stage aside—“Tanaav nahi hai, bhook hai!” (we’re not tense, we’re hungry).

This may sound like casual collegiate banter, but these are no gum-chewing college students. They are Delhi’s taxi, bus and auto drivers, more likely to be chewing paan than bubblegum, and ever-willing to toss out a stream of billingsgate, along with a spurt of red—at least, that’s the reputation.

This reputation is what the Delhi government wanted to erase, or at least cover up, in preparation for the Commonwealth Games. Thus, the Haryana Institute of Public Administration (HIPA) has been enlisted by the ministry of tourism to apply a careful layer of coached courteousness over the legendary surliness of those who make their living driving on Delhi’s roads. Since last October, this Gurgaon-based “finishing school” has trained 2,500 DTC bus drivers, 3,500 taxi drivers and 8,000 auto drivers. In small batches, the trainees are put through a brisk four-day “capacity building course”, in which they’re taught, among other things, stress management, a compact version of yoga that can be performed on the driver’s seat, personal finance, traffic rules, first aid, and spoken English. Those successfully groomed will find their names and numbers on a hall of fame—ie the HIPA website.

Whether they’re barely literate or proud ‘twelfth pass’, the drivers are taught a repertoire of 40 handy phrases, like “Please speak slowly” and the crucial “Where is the rest room?” These are learned phonetically from handbooks with cheery clip-art, or, for those who can’t read, by listening to a CD. The final test: role-playing these phrases after four days’ practice.

For many, the first “ice-breaking” session is terrifying. While some chirpily rattle off their names, others refuse to speak, or peer bemusedly into neighbours’ notepads. “My name Gurdeep Singh,” a driver says. “Gurdeep Singh?” the teacher repeats. “Haanji. I from Punjab.” “How many years have you been driving for?” “Eight.” “You should say: ‘I have been driving for eight years.’ Now tell us a good quality you have?” “Mein saaf sutra rehta hoon.” His neighbour leans over and whispers something. “I clean,” he announces triumphantly.

Eight years on the road may have prepared many like Gurdeep well for the rigours of life on the road, but not, clearly, for this back-to-school environment, which finds them wearing a vulnerable air. But the insecurity fades away, asserts Rajni Sekhri Sibal, HIPA director. “Our USP is that we’re democratic,” says Sibal proudly. “We treat everyone alike...doctors, engineers, drivers. So many drivers tell me, ‘HIPA treats us like human beings.’” Course director Manveen Kaur chimes in, “We tell them: As drivers you’re our ambassadors, like Krishna was to Arjuna! They get motivated like anything!”

“You can’t tell a man: Don’t chew paan, don’t be scruffy. So we try to bring about sensitised learning,” continues Sibal. So auto drivers get to see videos in which a foreigner (played by Sibal’s computer technician) encounters a “good” auto driver and a “bad” driver. The bad one (hammed up extravagantly by Sibal’s peon) scornfully spits a gobbet of paan at the mortified foreigner’s feet before he skids off in a drunken zigzag. The good one meekly turns on the meter and drives sensibly.

With comic turns like these, a daily stipend of Rs 200, breaks for tea and hot meals, most drivers leave happy. Bus driver Ajay Kumar even says: “Thanks to this course, the DTC driver will command more respect the world over.” That depends on what happens on the roads, in and after October.