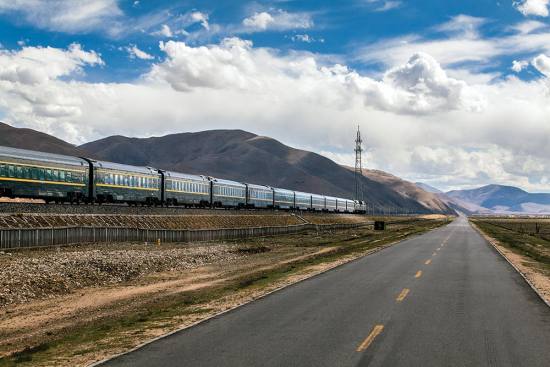 The Nam Tso Lake appears majestically through the mist and the rain, turq­uoise at the edges and as endless as the ocean, nestled amidst sky-scraping Himalayan peaks. The beauty of the landscape is breathtaking and even dreary weather can’t hide the natural grandeur of Tibet. But this story begins not in Nam Tso but in Lhasa, where we board the Qinghai-Tibet Railway, a high-elevation railway also called the Sky Road, for a 21-hour journey from Lhasa to Xining. It’s a dramatic trip that will take us through the heart of Tibe­­t—that magnificent state dotted with snow-capped mountains, rolling grasslands and mystic lakes. This is a journey of discovery.

The romance of the Sky Train—which runs 3,757 km and connects Lhasa to Beijing—lies in the stark beauty of the Roof of the World as also in the engineering of the railroad and the train. The railway line is a home-grown effort by Chinese engineers, who took years to innovate and develop the magnetic wheels that hover over tracks covered with ice and permafrost in Tibet’s deep winters. Chinese innovation allo­­ws oxygen to be continuously pumped into the compartments through the equivalent of an air-conditioning vent, to spare travellers the discomfort of high-altitude sickness.