The Godhra verdict may have given Modi’s regime a boost, but no one else is convinced 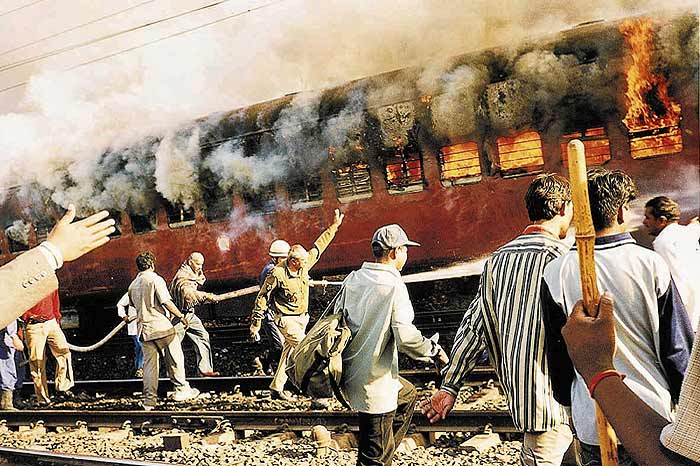 At the national level, the BJP would obviously be wary of engaging with the issue of Godhra and the Gujarat riots. This became clear on February 22—the day the special court gave the judgement on the burning of the Sabarmati Express. The national media collected for the daily BJP briefing in Parliament some hours after the verdict was given, tea and snacks were served, but no spokesperson came to meet the media. For the usually loquacious party, this was a rare happening, although individual leaders did give soundbites on Godhra to TV channels. Party sources say there was a deliberate attempt to downplay the issue and the rhetoric associated with it.

Godhra was a decisive political event in the BJP’s history. The party had just lost power in its base in Uttar Pradesh in 2002 and was expected to lose the Gujarat elections later that year, when the Godhra incident happened. Indeed, the kar sevaks were travelling from Ayodhya via Godhra the day after the BJP was defeated in the UP assembly. Then coach S-6 blazed, 59 passengers died, many of them members of the VHP. The ensuing riots saw a massacre of Muslims, in the polarised communal situation Narendra Modi emerged as a Hindu strongman, and ever since the BJP under him has remained undefeated in the state.

But now it seems the party would rather not dwell on these milestones. At the national level, it would rather play with a straight bat on issues like corruption and price rise, taking on a government they perceive as vulnerable. A focus on issues like the terror links of RSS members, Ayodhya and Godhra/Gujarat are vaguely embarrassing reminders of their ideological origins weighed with the cold calculation that such issues are no longer paying electoral dividends.

Similarly, in Gujarat Narendra Modi is in a very different position than he was in 2002. Then he had been sent to the state as a replacement for Keshubhai Patel against whom anti-incumbency had built up. He had been in power for just a few months when the train caught fire. Later that year,  Modi decisively won the state; by now he has won three assembly elections. The only hitch is, he is known to have national ambitions—which have been thwarted by the country’s revulsion to the cycle of violence he presided over so unapologetically. Obviously, he would like to outlive that history and, indeed, has tried to recast himself as a development man. But as things stand now, he is not welcome nationally—the NDA’s most important ally, Nitish Kumar, barred him from Bihar—or internationally, where he had to face the humiliation of the US denying him a visa.

Which is why the judgement delivered by the special court is politically expedient for Modi. On the one hand, the court has bought the theory of the train inferno being the result of a criminal conspiracy—a fig leaf he needs to try and cover the taint of the riots. On the other, the court has also let off some of the accused to keep up a semblance of justice being delivered in a state from where the Supreme Court shifted out many of the riot-related cases.

Yet there is no missing the fact that the so-called justice delivered in this case is as curious as the original incident of the burning of coach S-6 of the Sabarmati Express on February 27, 2002. There was no logic behind a judgement that freed 63 of the chargesheeted but found 31 guilty of murder and criminal conspiracy although the so-called “mastermind” was let off. Gagan Sethi of the Ahmedabad-based Centre for Social Justice says “it’s crazy and cruel that people were kept in jail for nine years when even if they had been convicted for the skirmish at the Godhra station they would have spent less time inside”.

Godhra accused who were acquitted leave Sabarmati Jail in a van 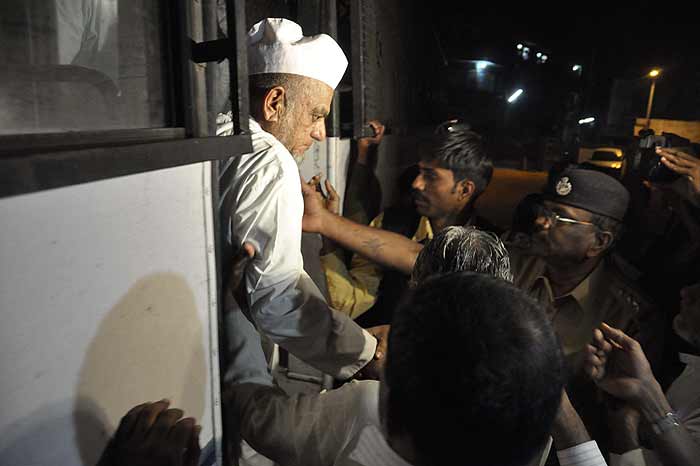 Social activist Hanif Lakdawala says, “I am very puzzled about this whole thing because the so-called main conspirator has been acquitted but still the conspiracy apparently hatched at his behest has been upheld. This means the police has done a very shoddy investigation...people were picked up randomly, sent to jail and also never granted bail. Who will compensate for those nine years in jail?”

There’s no logic behind a judgement that freed 63 of the accused, fixed 31 for murder and let off the ‘mastermind’.

Maulana Umarji was a businessman who had done a lot of relief work for the Muslim community after the riots. He had even made a presentation to then PM A.B. Vajpayee during his post-riots visit to Godhra, and had also spoken before some inquiry committees. Then suddenly Umarji was picked up and named as the mastermind who incited people to set the coach on fire in order to unleash a communal frenzy. In the police version of events, it seemed the man who was working for peace was actually behind the troubles. Now nine years later, he has been been let off, although others have not been so fortunate.

Several questions remain about the entire process, including about the witnesses on whose testimony a conspiracy has been proven. Then there is the basic question—why would the Muslims of Godhra plan such a horrific incident in a BJP-ruled state? After all, the incident became the trigger for the worst anti-Muslim violence in independent India as mobs seeking revenge rampaged through their neighbourhoods during three days of bloodshed.  It was the BJP, VHP and Modi who benefited from the gore.

Today, the BJP may be muted but the VHP is not. Praveen Togadia issued a statement: “Now that the honourable court has accepted the brutal criminal conspiracy that 59 Hindus were burnt alive by the jehadis, all conspirators must get the same punishment...a death penalty and nothing less than that.” At the time of writing, the sentence had not been pronounced though the prosecution is likely to seek death sentence for key convicts. The trial court has identified five accused who poured petrol on the bogey to set it on fire. They are: Aiyub Patalia, Mehbub Popa, Sadiq Vohra, Irfan Qalander and Saukat Patalia. Besides these five, Razaq Kurkur, owner of Aman guesthouse where the conspiracy was apparently hatched, has also been convicted.

The Gujarat government is naturally trying to showcase the judgement as an example of the exemplary justice meted out in the state (no matter that the state has been slammed by the SC and rights organisations). According to its spokesperson, Jaynarayan Vyas, “the verdict is a major setback to those elements out to defame Gujarat, its police, judiciary and people”. Actually, the trial only began after the SC asked the Gujarat HC to set up special fast-track courts to conduct trials in the nine most sensitive cases linked to ’02. The legal labyrinth has been a complex one till date, it’s a pity no one’s counted the human cost in all this.

By Saba Naqvi with bureau reports from Ahmedabad